The evidence that the planet is in a biodiversity crisis is overwhelming. With the rate of species extinctions accelerating, millions of acres of forest destroyed every year, and catastrophic declines in the abundance of wildlife, some scientists believe that we may soon tip into a “sixth mass extinction.” The challenges posed by the looming disaster are shared by both the United States and China (as well as many other countries), with the UN Biodiversity Conference which took place in early October a crucial time for worldwide mobilization.

In an interview conducted on October 7, 2021, Li Shuo discussed the importance of biodiversity loss as an issue of mutual concern in the bilateral relationship and highlighted specific areas where cooperation is essential to the future of the planet.

Li Shuo is a senior global policy advisor at Greenpeace China. He leads the organization’s work with multilateral environmental agreements, including the UN Framework Convention on Climate Change and the Convention on Biological Diversity. Mr. Li also supports Greenpeace’s advocacy for better ocean governance under the UN Convention on the Law of the Sea, various regional fishery management organizations, and the Antarctic Treaty. Domestically, Mr. Li directs the Greenpeace China’s policy campaigns on a wide range of issues, including air pollution, water, renewable energy, and fisheries.

What is the global biodiversity crisis?
Li Shuo:The loss of biodiversity across the world is becoming an urgent global environmental problem. The biodiversity crisis refers to problems like the loss of habitat, species extinction, and the loss of total biomass across the globe. This crisis is now truly planetary in scale and is largely contributed by human activities; it has also emerged as one of the most pressing environmental problems on the global agenda and demands urgent cooperation from major countries. To highlight the urgency, scientists tell us more than 70 percent of the global land surface has been altered by human activities since the 16th century; more than 700 vertebrate species and nearly 600 plant species have gone extinct, and there are probably much more. Animals have disappeared even without our knowledge and the U.S. and China as two large countries and two biodiversity-rich countries are not immune from this crisis. In fact, very recently the U.S. wildlife and fish service has declared 23 species in the U.S. extinct and on the Chinese side problems like environmental pollution, wildlife trafficking, urbanization, and the impact of climate change are all adding pressure to our ecosystem and biodiversity.

What is currently being done to meet this crisis
Li: China is actually one of the 17 mega-biology countries by the definition of the United Nations. The country harbors around 14 percent of the global vertebrate species and more than 10 percent of the plant species, so we are a biodiversity rich country. In recent years I think there has been increasing realization of the importance of environmental protection in general, but also biodiversity protection in particular, and this has been reflected in some of the high-level political rhetoric and concepts that people hear about such as ecological civilization. But it has also been coupled and complemented by concrete policy measures—the establishment, for example, of national parks and protected areas across the country in recent years, the tightening of our wildlife management system, and also the general improvement of environmental conditions here. The air pollution or air quality improvement been one of the most prominent cases in point. That said, I think the road ahead of us is still going to be quite long. Take our recent wildlife management reform for example: this reform was very much triggered by the outbreak of the COVID-19 crisis and as a result of that our wildlife management law was mandated late last year. It has made some progress in tightening management on wildlife as a source of food but still left important loopholes when it comes to wildlife as a source of medicine, fur, skin, or for the purpose of display, so there’s still much that china can and should do to improve biodiversity and species protection.

What is the Convention on Biological Diversity and could we see any outcomes from this COP-15 meeting?
Li: China will soon be hosting a major conference for the Convention on Biological Diversity, the CBD, and this conference COP-15 will be a major milestone for the for the CBD negotiation forces. This meeting carries the task of outlining a new decade of global biodiversity protection plan. The Convention on Biological Diversity is a weaker environmental convention compared for example to the U.N. framework convention on climate change the UNFCC. It has long suffered from a lack of implementation and also resources that developed countries should provide to developing countries, and this lack of implementation and resources is precisely why the biodiversity targets which countries produced in 2010 have failed and precisely where Kunming should do better. Without implementation and and finance CBD would risk uh becoming just an exercise of constantly outlining where we need to be but without actually answering how do we actually get there. So, china this year and next year will have the task of steering on the global community towards a strong deal. I think it will be a major test of China’s environmental diplomacy. So far, Beijing has demonstrated that it is able to help and support global environmental governance through its domestic action. But I think it remains to be seen whether and how it could also provide support in steering the countries towards a strong environmental ambition, and in my view the biggest legacy that china can leave for the CBD and COP-15 is not only about outlining a future global biodiversity vision, but actively ensuring that this vision is fulfilled and enforced.

What should American and Chinese policymakers do to address this issue?
Li: I think policy makers in these two countries should at least realize two things: first, engagement between these two countries in the field of environmental protection and conservation is very important. Engagement has worked in the past and I think it will continue to serve us in this particular area in the future. Over the past decades, we have seen that policy dialogues, for example between the U.S. and China, brought some of the pressing environmental challenges to the fore. One example here would be the illegal fishing conducted by Chinese overseas fleets. There have been a lot of policy dialogues between the U.S. and China and I think U.S. engagement in this area helped by bringing policy attention on to this issue. Information sharing and capacity building from the U.S. side also helped inspire their Chinese counterparts in policy innovation. One example here would be the establishment of our national park system which is very much modeled and innovated further based on U.S. practices. The second point that is important is that both the U.S. and China should continue to explore global environmental governance issues where they can work towards the same direction, and here, climate change has been dominating the headline. But if we recall what happened in the past U.S.-China collaboration also helped in the past to unlock major deals related to ocean protection. What some of the recent Chinese announcements suggest to me, including the carbon neutrality announcement made last year, is that China’s decision to ratify the Kigali amendment to the control protocol and very recently the overseas co-moratorium, I think you what these announcement suggests to me is that the U.S. still has a very important role in shaping how China approaches some of these international environmental issues and there is still political willingness on the Chinese side to make concrete near-term progress. If the U.S. and china were to extend the current political energy that they are rightly investing in climate change to issues such as biodiversity conservation and ocean protection, I can indeed see quite a number of areas where they can make concrete progress which will of course bring environmental benefits not only to these two countries but also the rest of the world. 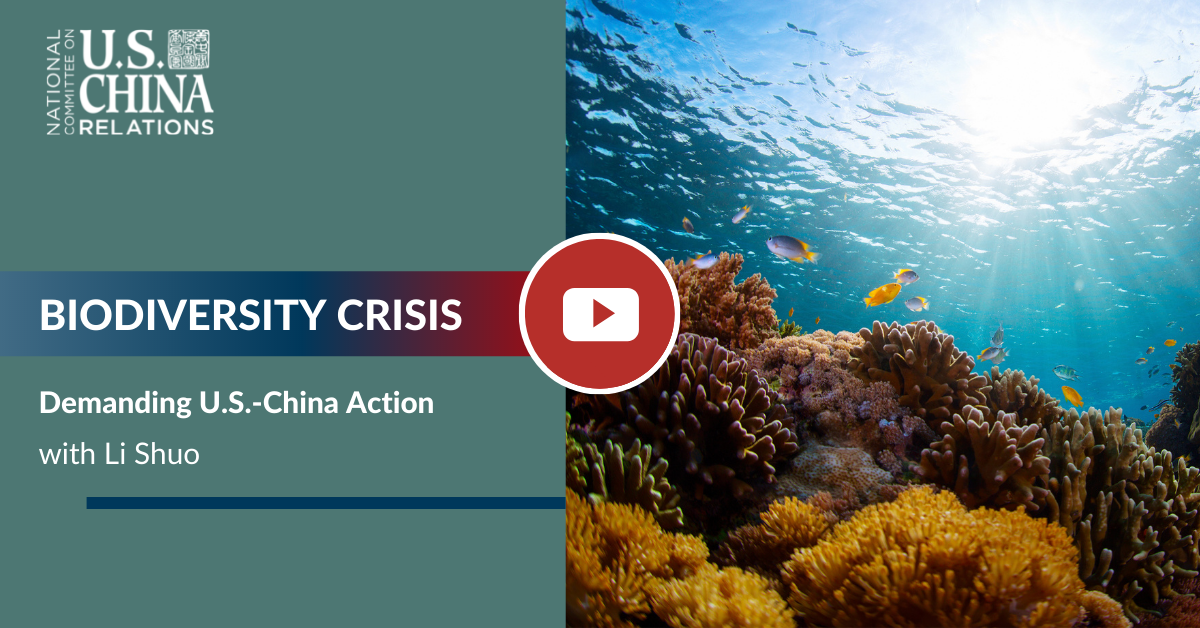 VIDEO: Li Shuo of Greenpeace China discusses the importance of biodiversity loss as an issue of mutual concern in the U.S.-China relationship and highlights specific areas where cooperation is essential to the future of the planet.