On July 23, 2020, the United States government ordered the Chinese consulate in Houston to close. Less than a week later, the American consulate in Chengdu was vacated as reciprocation from Beijing. Harvard University Department of Government Ph.D. candidate and former U.S. diplomat Naima Green-Riley analyzes the motivations behind each government’s drastic step and evaluates the possible implications for the regions serviced by each consulate, as well as the U.S.-China relationship as a whole.

Naima Green-Riley is a former U.S. diplomat. She is currently a Ph.D. Candidate and Raymond Vernon Fellow in the Government Department at Harvard University. Naima specializes in U.S. and Chinese foreign policy, with a focus on public diplomacy and the challenges in the global information space.

Naima’s academic work intersects with her contributions to global development and diplomacy. Naima sits on Oxfam America’s Board of Directors. She was listed as one of New America’s 2020 Black American National Security & Foreign Policy Next Generation Leaders. Before pursuing her Ph.D., Naima served in Alexandria, Egypt and Guangzhou, China as a Foreign Service Officer at the State Department.

Naima’s research has been supported by the Morris Abrams Award in International Relations, the USC Center on Public Diplomacy, and the World Politics and Statecraft Fellowship from the Smith Richardson Foundation. In 2019, she received a grant from the Fairbank Center at Harvard to support her time as a Visiting Scholar at Renmin University in Beijing. Moreover, her writing has been featured in The Root, The Diplomat, Geopolitical Monitor, and Charged Affairs.

Naima earned a Bachelor’s degree (BA) in International Relations with honors from Stanford University. She was a Belfer Center International and Global Affairs fellow at Harvard Kennedy School, where she graduated with a Master’s in Public Policy (MPP). She is proficient in Mandarin Chinese, and she maintains an intermediate-level proficiency in Arabic. You can follow her on Twitter @naimagreenriley, and her personal website is www.naimagreenriley.com.

What do we know about the U.S. government’s motivations for ordering the closing of the Chinese consulate in Houston?

Naima Green-Riley: Let’s just start at the beginning, which is that we know that last Tuesday, July 21, the U.S. government told the Chinese consulate that they should close all of their operations by Friday, July 24. They basically gave the Chinese consulate in Houston about 72 hours to leave the city of Houston. The stated reason for that, what Deputy Secretary of State Stephen Biegun said was that there were increasingly aggressive moves by China such as commercial espionage, unequal treatment of our diplomats and other U.S. citizens who were doing business with China, and an abuse of United States’ academic freedom that had led to this decision to close the consulate.

One could imagine that with the current U.S.-China relationship, that argument being made about any of the places where the Chinese has a consulate in the United States. The Chinese government actually has several consulates. Ppeople who are sort of seeing this unfold have started to say the reasons appear quite general and broad, and that has led many of us to start to think about why, right now, the decision was made to close the consulate in Houston.

Green-Riley: It’s difficult to imagine that it doesn’t have something to do with the increasing amount of competitiveness between Donald Trump and Joe Biden. We know that there are now less than a hundred days until the presidential election in the United States and we know that China has consistently been used, even before this electoral race, as sometimes a scapegoat, sometimes a topic that is known to rally up nationalistic sentiment in the United States. And if that’s the case, then it can’t be ignored that there seems to be political motivation behind closing the consulates.

Beyond that, we’ll have to continue to monitor the situation to see if there were activities going on at the consulate that we didn’t know about that also led to the specific closure of Houston.

Green-Riley: Anytime you close a consulate, you do some sort of damage to a bilateral relationship. But, some have thought that actually the choice to close Houston was made in order to take the least amount of risk, when you consider there are Chinese consulates in New York, Chicago, San Francisco, Los Angeles, and many have said that those other cities are actually more crucial to the U.S.-China relationship. So perhaps, this is a move to, sort of, choose the one that will have the least impact.

The U.S. government, the deputy secretary-general of state and others have said that some of this decision is related to concerns relating to espionage, Chinese espionage in the United States. If there is something very specific about the extent to which that was happening in Houston or the extent to which the Houston consulate was causing that type of activity, then that particular information has not been made abundantly clear here.

Houston is, if not necessarily the city with the largest implications for the U.S. trade relationship with China, definitely a city of symbolic significance. There’s an iconic video clip or picture of Deng Xiaoping who in 1979 made his first state visit to the United States. It was right after the normalization of U.S.-China relations. And he’s at a rodeo, he’s wearing a cowboy hat, and actually, that visit opened up the path for Houston to be the city where the first Chinese consulate in the United States is based. So, the consulate in Houston has always had a historical symbolism and significance.

Green-Riley: Houston’s also the city where in 2002, Yao Ming, who is an iconic Chinese basketball player, was recruited to play with the Houston Rockets and the Chinese took a lot of pride in that. It opened up the doorway to a pretty large fandom in Mainland China for the NBA, and that instance in itself linked, of course, to a much more recent incident in October 2019 when the general manager of the Houston Rockets ended up tweeting a picture and some words about protests that were happening in Hong Kong. And, Houston was sort of at the epicenter of all of this happening. Symbolically, there is probably something there in the decision to close the Houston consulate.

What were the motivations and message behind the CCP closing the consulate in Chengdu?

Chengdu is the capital of Sichuan province. It is considered to be about the same in terms of its impact on the U.S.-China trade relationship. But, I think we have to see the Chinese government making the decision to ask the United States to close its consulate as a refusal to be seen as weak. And the need for the CCP to do that is completely centered around the need to be seen strong domestically.

The way that, sort of, government-to-people relations operate in China is very much based on one of the state continually demonstrating its competence and ability to govern in a way that is best for Chinese citizens, in a way that projects Chinese authority not only within China but abroad; that leadership is unwilling to be seen as being forced into a corner by the Trump administration.

What will be the near-term costs to people and businesses in Texas?

Green-Riley: The immediate cost will be the inability of people in Houston to apply for visas, lack of access to the consulate to facilitate that travel. While that may seem like a small part of a bilateral relationship, it is actually hugely important to the relations between the two countries because visas allow citizens, for example, from the United States to travel to China to create business ties with Chinese businesses, to engage on a cultural or people-to-people level with Chinese citizens.

Now, that doesn’t mean that all those companies that I mentioned, those Chinese companies that have offices in Houston, have no recourse, it doesn’t mean that all those companies in Houston with offices in China have no recourse. They can apply for visas through other consulates in the United States, but since those are further away, it means that they’ll either have to use couriers or they’ll have to make trips themselves to those consulates in order to process the visas—which is more work—so of course, it’s something that’s going to be felt by those companies, and probably the smaller businesses are the ones that are going to feel those costs the most.

Green-Riley: It means that students who may have been going to Rice in Houston or to UT Austin just a little bit away, who used to know that they had a consulate very close to them where if something happened, they could make a phone call so that they could get support, for example replacing a passport, or just getting support for something related to being a Chinese citizen overseas—now won’t have that there.

What could this mean for the U.S.-China relationship?

Green-Riley: In the larger scheme of things, I think that there are some grander repercussions for the decision that was made. Girst of all, consulates are, at their core, diplomatic missions. They’re places where diplomacy takes place. If you systematically begin to cut down on avenues for diplomatic exchange, if you systematically begin to infringe upon the institutions that are created in order to facilitate dialogue between countries, then, I would say you are going to move into an arena where the only tools at your disposal are actually ones less focused on dialogue and perhaps more focused on some other type of interaction. And because the United States and China are increasingly in an antagonistic relationship, we have to ask ourselves, “Does that mean we’re going to start relying more on tools that would create greater friction if we don’t have those diplomatic resources to draw on?”

Now, of course, there is the question of, in the rising tensions, how much productive influential diplomacy would even be happening between the two sides at this point in time, but absolutely, there is no chance it’s going to happen if the consulate doesn’t exist.

It’s funny because as I’m speaking to you, something is coming to mind. I was sitting in some talk somewhere last week when I heard a former U.S. official use the term “burning the boats.” It’s a term that is adapted from an old Chinese saying. There was a Chinese general who once, in a time of war, instructed his men to sink the boats and break all the kettles because they were going to advance. They were going to move forward in the situation and he didn’t want any turning back. There was this idea that in order to make sure that his men would fully commit to this course of action, you had to burn everything or you had to get rid of everything behind you. Decimate it all and just move forward.

Green-Riley: Certainly, there’s an aspect of closing up consulates so that they won’t reopen that has the same symbolism as sinking the boats. You know, we can’t go back. We’re really committing to this course of action and one that actually seems increasingly antagonistic. I hope that that’s not the case. I hope there is a way to change course at some point so that we can maintain some sort of a healthy, productive, and cooperative relationship with China moving forward. But right now, we’re just seeing one more action that will take away from our ability to do that. 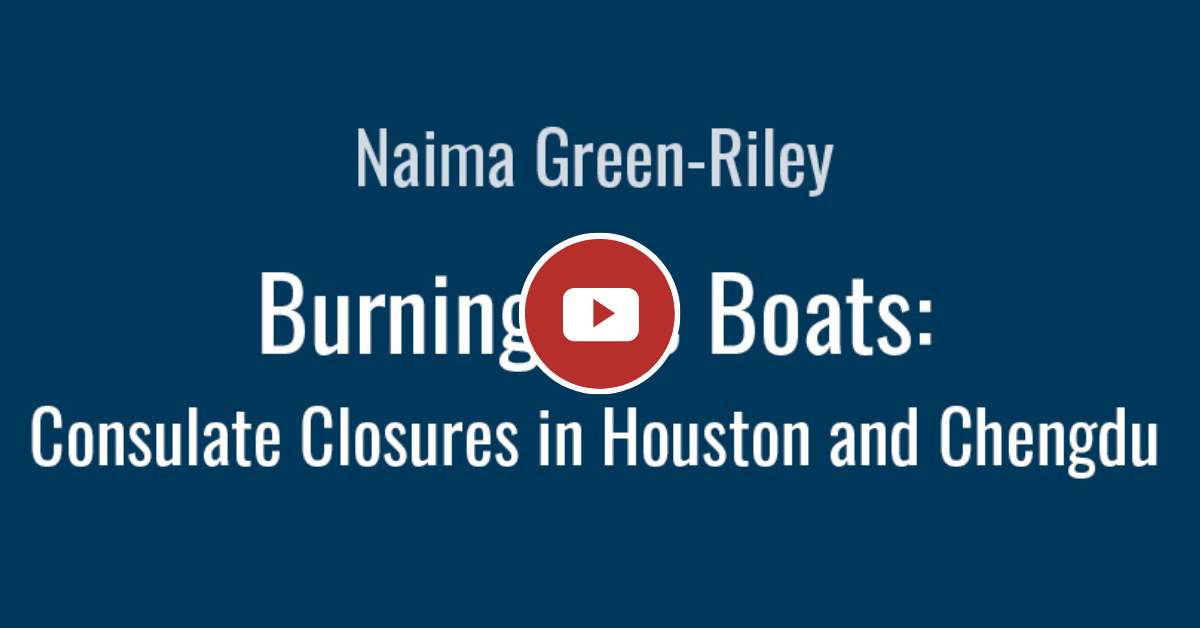 Naima Green-Riley on Burning the Boats: Consulate Closures in Houston and Chengdu

VIDEO: Naima Green-Riley analyzes the motivations behind each government’s drastic step and evaluates the possible implications for the regions serviced by each consulate, as well as the U.S.-China relationship as a whole.