China’s economy has grown faster than any other over the last 40 years — but there are troubling signs ahead. How could a Chinese economic downturn affect people in the rest of the world?

Houze Song is a Fellow at MacroPolo, where he leads the think tank’s work on the Chinese economy. He specializes in subnational and regional analysis, having led projects on local government debt, regional economic divergence, infrastructure investment, and labor flows. He has constructed specialized data sets on China’s local government financing vehicles debt and hukou liberalization that provide unique insight into the Chinese political economy.

He also writes “MP Econ,” a Substack research note on the Chinese economy, and publishes a quarterly economic outlook, where he examines secular trends and tests different ideas about the Chinese economy. Houze is also a contributor to the award-winning MacroPolo book “China’s Economic Arrival: Decoding a Disruptive Rise” and has briefed government officials on China’s economic developments. His work is read by market participants and policymakers and has been cited in the Wall Street Journal, Economist, Financial Times, Bloomberg, and New York Times.

Previously, Houze was a researcher at the Columbia Global Center (East Asia). Before that, he worked as a research manager at the Unirule Institute, where he assisted the chairman Mao Yushi with research and project management. He holds an MA in quantitative methods and an MPA in international economics, both from Columbia University, and a BA in economics from Peking University.

What is the general trend of China’s economic outlook?

Houze Song: I would say the general trend is really one of slowdown. First, as the country gets richer, it becomes more difficult to maintain high growth. At China’s current GDP per capita level, it is impossible to maintain growth at above 6%. Moreover, China faces another two headwinds. First is a worsening of demographics. Because of the one child policies, China will face rapid aging in the coming years. Moreover, the recent tensions in the U.S.-China relationship means China will find it difficult to access cutting-edge Western technology, such as semiconductor manufacturing, which further setback China’s effort to become an advanced economy.

What are the indicators economists use to measure the health of the Chinese economy?

Houze Song: I would name three. First is trade surplus. In China’s case, China used to run a very large trade surplus. For example, in the years before the financial crisis, trade surplus almost accounted for 10% of China’s GDP.

The second indicator is consumption. This is because for many years China has relied on investment to create growth. But investment without consumption is not sustainable. As a result, we want to see consumption-driven instead of investment-driven growth.

What are the challenges facing China’s economy right now?

Houze Song: I would say at this moment there are two major challenges for the Chinese economy. First is COVID, because China continued to implement zero-COVID policies, travel, transportation and services sectors have been severely impacted and especially the impact on services sector is very concerning. This is because right now services sector generates the majority of the jobs. Because services sectors such as restaurant and tourism has been severely affected by zero-COVID, this means that a lot of people who work in those sectors are suffering large income drops, and many of them probably lost their jobs. Both the income drop and the high unemployment rate are both bad for consumption.

And the reason for this decline can be attributed to two factors. One is households are less confident in their ability to purchase property. This is because as the economy slows down, households have suddenly realized their income is now growing much slower than they anticipated. Moreover, because in China, the majority of the property sales are in the form of pre-sale, which means households need to first meet down payments, usually one or two years in advance. Recently, many large property developers have defaulted on their debt and the financial difficulties affect developers’ ability to deliver their pre-sale units on time. As a result of these two challenges, households are becoming more reluctant to purchase property.

And the property problem is concerning not only because of its impact on growth, but more importantly, it also has financial implications. This is because Chinese banks not only have direct exposures in the form of mortgages or lending to developers or construction firms, but more importantly, because of a slowdown in property sales, developers are now less willing to purchase land, and land is Chinese local governments’ biggest source of income. With land sales now also down close to 30% year-on-year, local governments are now having difficulties to repay their debt, which will have severe financial risk implications.

Why should Americans care about China’s economic slowdown? How will a slowing Chinese economy affect the United States?

And the number two channel of how China’s slowdown will spill over to the rest of world is the exchange rate. With China’s growth slow down, the Chinese RMB will depreciate. A depreciation of RMB means appreciation of other currencies, for example, the U.S. dollar. If U.S. dollars become more expensive relative to RMB, this means that U.S. goods are becoming less competitive. And this also means U.S. goods may lose some of its market share due to competition from cheaper Chinese goods.

The number three channel is financial indicators. Basically, concern about a Chinese slowdown and uncertainty about the potential implications may trigger so-called “risk-off” selling in the financial market. For example, during the last time China’s growth slowed down significantly, which was 2015 to 2016, the U.S. stock market has also declined because of concerns about China’s hard landing. 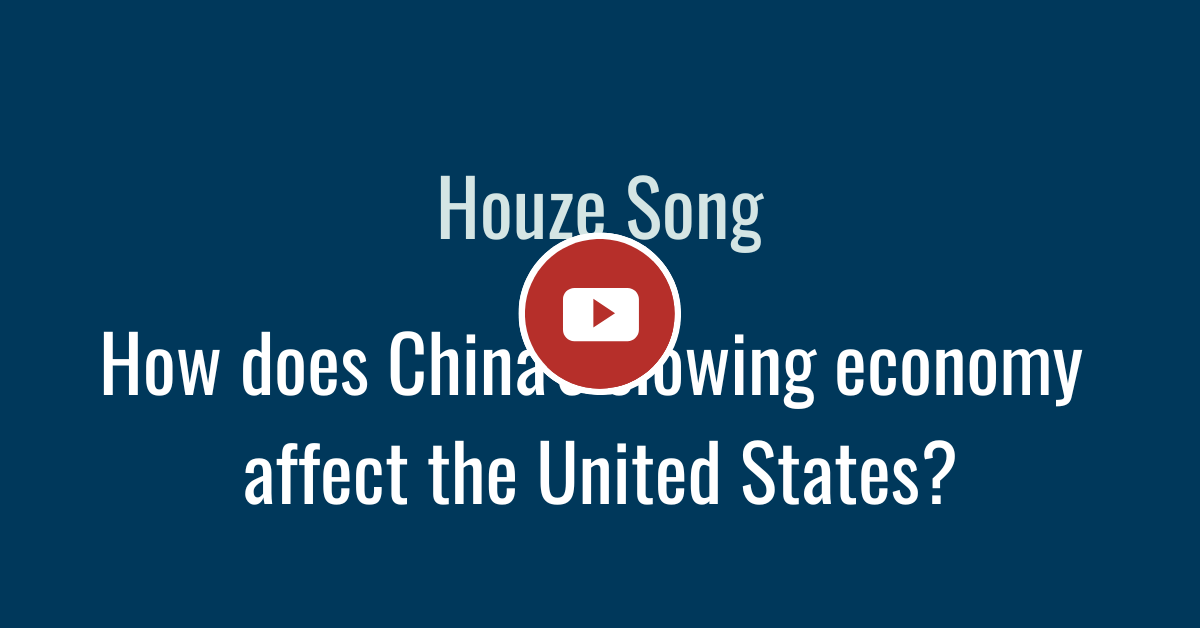 Houze Song explains how slowing economic growth, an aging society, and a looming property crisis have implications not just for China, but for the United States and beyond.