The United States and China have pledged to work together to fight climate change. But is cooperation enough to stop global temperatures from rising past 1.5 degrees Celsius? Climate policy expert Deborah Seligsohn (Villanova University) explains how competition between the two countries can be leveraged as a positive force to deliver the best environmental outcomes.

Deborah Seligsohn is an assistant professor of political science at Villanova University and a Woodrow Wilson Institute China Fellow. Her research focuses on Chinese politics, U.S.-China relations, and public health, energy and environmental politics in China and India. Previously, she worked in both the NGO and government sectors on public health, science, climate, and the environment. From 2003 to 2007 she served as the environment, science, technology and health counselor at the U.S. Embassy in Beijing, and then from 2007 to 2012 she served as the Beijing-based principal advisor to the World Resources Institute’s China Energy and Climate Program. In addition to publishing in academic journals, her writing as appeared in the Washington Post, the Financial Times, the South China Morning Post among other publications. Dr. Seligsohn received her Ph.D in political science and international affairs from the University of California San Diego in 2018.

Given increased U.S.-China tensions, can the two countries still come together to cooperate on fighting climate change?

Deborah Seligsohn: I think we actually have to reframe the conversation. We’ve been framing it in terms of cooperation for 30 years now. And the reality is the U.S. and China each have their own very separate climate policies and approaches, which have made some of the difference, although not enough of a difference in either country. We also are in a situation where our bilateral relationship is pretty tense. So, I think it actually is to our advantage to think about our interaction internationally is about setting high goals, working through the Paris Agreement to work together on what we need to achieve, on what the science is, on where we need to go, but then creating those goals and releasing all of our companies to compete vigorously and globally to sell the best low-carbon and non-carbon alternatives at the lowest price. So, I think competition, not cooperation is going to be the key to actual large-scale mitigation.

Is competition the best model because U.S.-China relations have worsened overall?

Seligsohn: I do think it’s partly about where we are now, and part of that is the tension in the relationship. The competition obviously is going to be easier to manage than close cooperation. But part of it is also where we’re at in terms of the climate crisis. So, we have lots of technologies that are ready to go or at market prices can be widely deployed. So, we clearly have lots of untapped potential for using non-carbon fuels, for increasing energy efficiency, for transforming city planning and the way we use transportation. And all of these technologies have actually gotten to the point where they’re really ready and they’re on the market. So, the level of cooperation needed [was] when we were, first of all, in a much more of a research phase, but secondly, in a phase where we were still trying to sort of build confidence in the possibility of a post-carbon future was probably much higher. And a lot of that cooperation was extremely useful.

But it’s also the case that over the years, a lot of our cooperation in climate change was actually used to try to reduce tension in other areas, that we would say, “Well, we have this friction in South China Sea, but let’s talk about how well we get along on climate change.” Right now, climate is too important to be simply the happy cooperative thing for some other purpose. We actually have got to get the job done on climate. And I think we can get the job done better because there’s so many commercially-available technologies by working on the competition aspect.

How can the United States and China encourage competition without causing friction?

Seligsohn: For the entire time I’ve worked on climate change, people have been trying to use various World Trade Organization analogies to climate agreements. And I think in the current context where there’s so much available commercially, where the need is so obvious, where the prices are actually good, if we think about the way the WTO normally works, which is just to set those standards, set the bars, set the behavior for trade among nations, and then let companies compete, that’s the way we have to think about climate too.

I think the WTO is a good analogy for the moment that we’re at right now. There been a lot of discussions within the WTO about having lower tariffs or no tariffs for environmentally-friendly goods. I think that is an environment, especially in light of President Biden’s Build Back Better Plan, and his plan for an enormous infrastructure program where U.S. companies can compete easily with Chinese companies. A lot of these technologies came originally from the U.S., and one of the reasons why they’re flourishing so much better in China is because the market has been so much more consistent. In the U.S. we give tax abatement one year and don’t the next year, and we encourage this, then we encourage that. That’s really bad for business. And so, if we actually do have this new climate investment program, I think we create an environment that’s great for U.S. business. The Chinese have their own sets of targets and goals, which will continue to create a good business environment for them, and then just let everybody go at it. These businesses are deeply integrated. It’s not like one business in one country is going to win and another is going to lose. This is a win-win-win situation, and it’s a win for the planet.

So, I think there is a need for international cooperation, precisely of the kind you’re talking about with WTO, of creating good markets. And one of the ways we create good markets in the climate space is by setting high goals for what we’re trying to achieve. And I do think that requires an international agreement. I think that’s the Paris Agreement, and I think it’s the next round of country commitments, these nationally-determined contributions under Paris. That discussion will next take place in November this year in Glasgow. And I am very hopeful that U.S. and China will once again be leaders in that conversation.

What does climate leadership actually look like for China and the United States?

Seligsohn: I think climate leadership today has to mean doing the work, first and foremost, right? So, it has to mean good mitigation programs at home. And those I think will play out in China through new goals developed with their 2060 carbon neutrality target. The 14th five-year plan goals are decent, but they’re not the real step change that we’re going to need to actually protect the world from catastrophic climate change. So, I’m hoping we’ll see more. I think we’re more likely to see more if the U.S. actually does have a new carbon program that really does show that we’re making that step change. And in the United States, I think the strategy is going to be investment. And I think it’s the best strategy because the research suggests that winning coalitions are the way to actually get everybody on side. That one of the problems with the carbon tax or cap in trade is that people focus on costs. And one of the huge advantages of an investment-focused strategy is everybody’s focused on benefits. And you immediately create a group of lobbyists in Washington who want more spending on infrastructure because they’re making lots of money and that’s the way you get long-term programs. So, if you actually create these infrastructure opportunities, you wind up with energy companies, transportation companies, all kinds of people lobbying for the money that makes this stuff possible, and that’s what makes for a successful long-term program within our system. So, we have different systems and if both of them start moving at full tilt, that’s the key to leadership. But leadership is also framing the international conversation. And I think if you go back to Paris, it wasn’t one country leading it. It was several.

How do U.S.-China bilateral relations impact global climate cooperation, and what can we expect for the fall 2021 climate summit?

Seligsohn: Now, in terms of the bilateral, if you go back to the pre-Paris periods, so Paris is 2015, and you have these very important U.S.-China joint announcements, really create the roadmap for Paris. So, I am extremely hopeful that especially with Secretary Kerry back involved in the climate conversation, and the Chinese then immediately responded to that by bringing former Vice-Chairman Xie Zhenhua back to be his negotiating counterpart just as they were at Paris. So, I think we’re in a situation where the idea that within the multilateral context, that bilateral relationship is important, is clearly recognized by both sides. And I think both sides are actually putting a certain amount of goodwill, especially into who they chose as their chief negotiators. 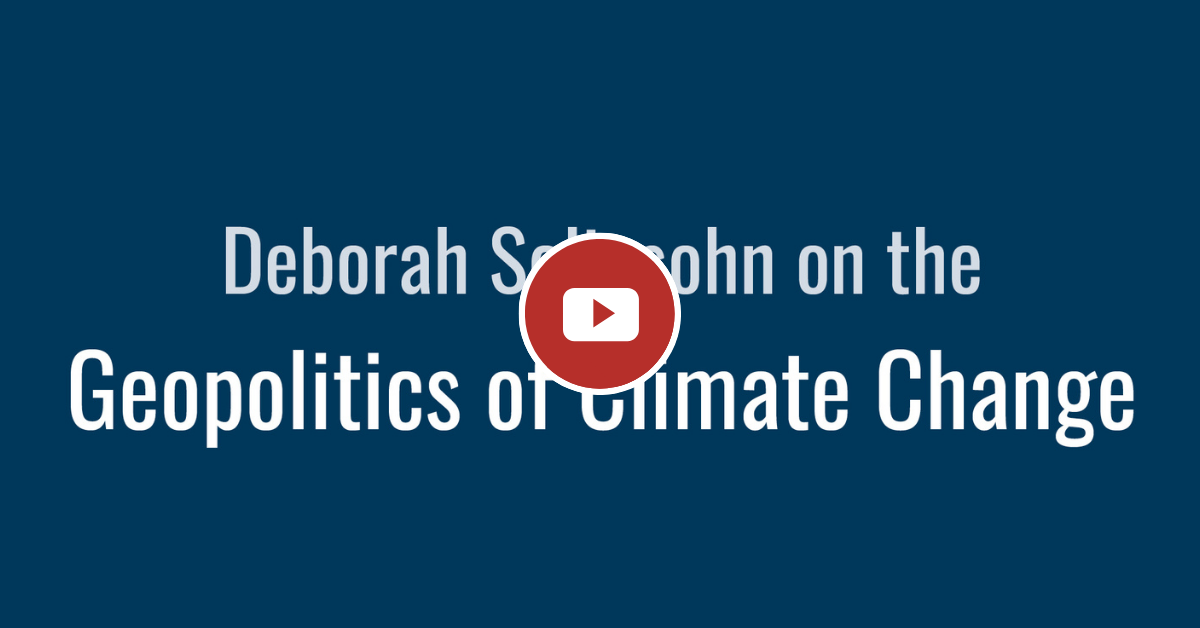 VIDEO: Deborah Seligsohn explains how competition between the two countries can be leveraged as a positive force to deliver the best environmental outcomes.