Xi Jinping is China’s political leader, but what does that mean in practice? Yuhua Wang, professor of government at Harvard University, analyzes Xi’s status in the Chinese political system and how much influence he has.

Yuhua Wang is the Frederick S. Danziger Associate Professor in the Department of Government at Harvard University. He is the author of Tying the Autocrat’s Hands: The Rise of the Rule of Law in China (Cambridge University Press, 2015) and The Rise and Fall of Imperial China: The Social Origins of State Development (Princeton University Press, 2022).

Who is Xi Jinping?

Yuhua Wang: So Xi Jinping is the political leader of China. Among all the positions he’s holding, he’s probably holding dozens of positions right now, but there are three that are the most important.

First, he’s the president of China. This means that he’s the head of the state. He gets to meet with other heads of state, for example, Queen Elizabeth or the President of the United States. But in China, this is a symbolic position, which doesn’t come with a lot of power.

The third thing, which is the most powerful among all, is the chairman of the Central Military Affairs Commission. This means that he’s the commander in chief in China, who is in charge of China’s military. In addition to these formal positions, he’s also a princeling, which means that he’s the son of one of the founding fathers of the People’s Republic of China. His father, Xi Zhongxun, was a colleague of Mao Zedong’s and also a high-ranking official in the 1950s, 1960s. So Xi Jinping has this formal power coming from his formal positions, but also, he has this charisma, this legacy from his father who was one of the founders.

How much power does Xi Jinping have?

Yuhua Wang: So a popular view is that Xi is a dictator who moves his fingers and things get done in China, but that’s just not true. I’m going to make a bold argument here that he’s actually not as powerful as we think he is. You know, we often associate power with formal positions, but that has not been the case in Chinese politics. Deng Xiaoping for example, who was the leader of China in the 1980s, didn’t hold the same positions that Xi Jinping is holding. For example, Deng was never the president of China, Deng was never the chairman of the Chinese Communist Party. So you cannot really measure how much power a person has by looking at his formal positions.

So in a sense, say, for example, a lot of people compare Mao Zedong and Xi Jinping and think that Xi is more powerful than Mao Zedong, but I would make the counter-argument that Mao actually has the third face of power, that during the Cultural Revolution, during the whole Mao era, I would say Mao could really influence how Chinese people think. You know, during the Cultural Revolution, people followed him, you know, voluntarily, you know, to become Red Guards, for example. And people were voluntarily doing this, not because of fear. It’s actually because they believed in Mao, they believed in Maoism. They believed that Mao is a good leader who can lead China to a better future.

But, you know, I would say that Xi Jinping doesn’t have that power. I think most of the times in contemporary China, Xi makes people comply by creating fear. It’s not that people are following him voluntarily, it’s actually that people are following him because people worry about the risks of not following him. And then say, for example, during his anti-corruption campaign, he arrested a lot of high-ranking officials, which created this fear among all the bureaucrats in the whole political system. And then people, you know, changed their behavior because of fear created during the anti-corruption campaign, not because people voluntarily follow what Xi Jinping tells them to do. And it might have reduced corruption in the Chinese government, but we don’t really know whether it will last once the fear is gone.

And then one limitation of using fear is that you never know whether people are truly loyal to you. They are now loyal to you on the surface. Xi appears to have no political opponents, at least publicly, but the officials all appear to be loyal and compliant, but they might be hiding their true feelings. So I think it’s very important to understand it is not only about, you know, how you look on the surface or how powerful you are, whether you can make decisions, it’s also about whether you can shape how people think.

Yuhua Wang: One of the things that he has been trying to do since 2012 is he has been trying to eliminate or weaken the outside groups. You know, for example, one of the goals of the anti-corruption campaign is to weaken so-called factions that are not loyal to himself. He’s trying to build his own faction, but also he’s trying to make everyone his own faction. So I think that’s one of his goals of governing China since 2012. So there might be opponents within the Chinese political system, there might be disagreements, but we just don’t get to hear them because of the reason that I said. There’s this fear within the Chinese political system that everybody doesn’t dare to speak out when they disagree with Xi. I think that’s very dangerous for the ruler because as the ruler of a country, you want to hear what people are really thinking so that you know who are your enemies, who are your friends, but when everybody becomes quiet and then they comply, I think it’s very dangerous for the top leader.

Yuhua Wang: I don’t think there will be a big event that leads to the collapse of the Chinese Communist Party. I don’t think that that will happen in the near future, but I think that in the next let’s say 5 or 10 years, if Xi Jinping is still in power, let’s say, in the next 5 or 10 years, one sign that his power is declining is we see more policy changes or policy shifts within a very short period of time. We’ve heard in the past several years that Xi has been trying to push for certain policies, but you know, we are, maybe in the next 5 or 10 years, likely to see some policies, there’s some new policies that change his policies, where there are some public discussions that question the policies that Xi made in the past 10 years. So I think those are probably the signs that his power is declining, also a sign that there are disagreements within the party, but that’s still very unlikely, I think, because Xi has accumulated so much power within the Chinese Communist Party. And then, like I said, everybody is quiet because there’s fear.

What about a political leader like Kim Jong-un or Vladimir Putin? These are also leaders whom Americans think of as dictators, in a broad sense. How would you disaggregate these three figures from this single definition?

You mentioned term limits. Will Xi Jinping rule for life?

Yuhua Wang: He can rule for life, but it doesn’t mean that he will. If I were Xi Jinping–I would never become Xi Jinping–but if I were the top leader in China and then there’s no term limits, the best way for me and for my legacies to continue is actually when I’m healthy, when I’m relatively younger, I would choose someone that I trust completely and then make that person my heir apparent, and then make sure that he or she, I hope it’s a she, but it’s not very likely in Chinese politics, my heir apparent will carry my legacies. So I think that would be the best scenario for Xi Jinping. Which means that if he really cares about his legacies, he’ll step down earlier and then choose his heir apparent to make sure that the heir apparent will continue his policies. 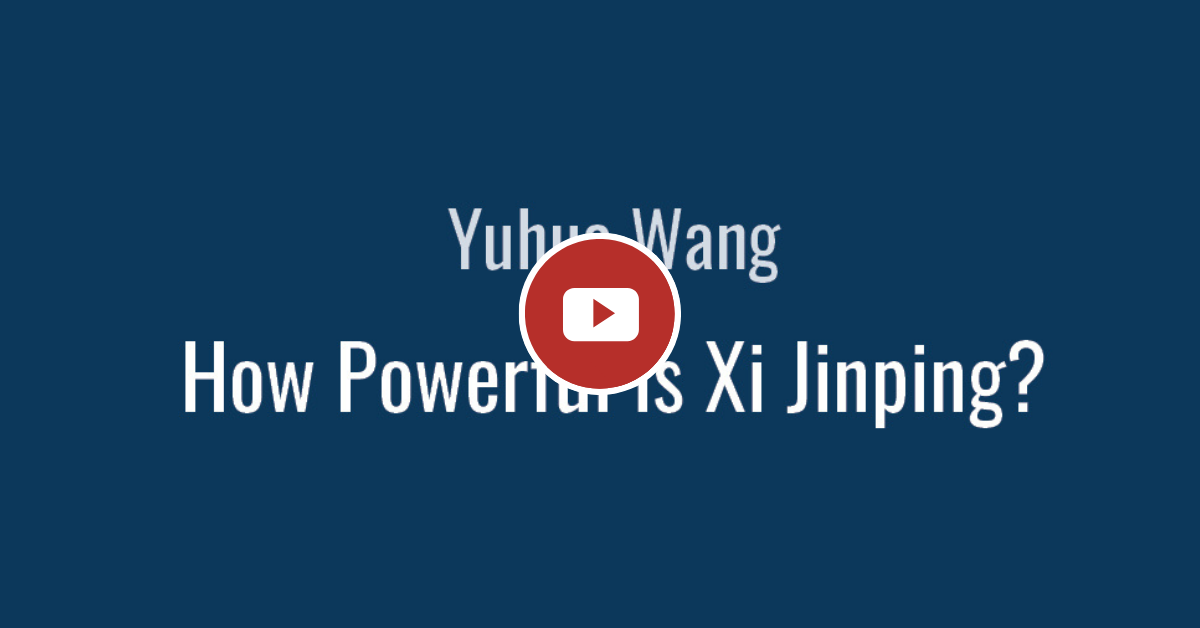 Yuhua Wang, professor of government at Harvard University, analyzes Xi Jinping's status in the Chinese political system and how much influence he has.