The influence of artificial intelligence on our world is only growing, as smart home products, algorithm-based streaming platforms, and even autonomous vehicles become a part of our daily lives. Since the 1990s, American tech companies in Silicon Valley have dominated the development and application of AI-driven technologies.

However, AI pioneer Dr. Kai-Fu Lee explains that China has rapidly caught up with the United States, accelerating AI innovation and implementation into our daily lives. Lee argues that the future of AI will be even larger than the industrial revolution, posing unprecedented challenges and responsibilities for both AI superpowers. Are the United States and China destined to compete for AI supremacy, or are there opportunities to learn from each other and work together to advance humankind?

Dr. Kai-Fu Lee is the chairman and CEO of Sinovation Ventures and president of Sinovation Venture’s Artificial Intelligence Institute. Sinovation Ventures, is a leading technology investment firm focusing on developing the next generation of Chinese high-tech companies. Prior to founding Sinovation in 2009, Dr. Lee was the president of Google China. Previously, he held executive positions at Microsoft, SGI, and Apple. Dr. Lee received his bachelor’s degree from Columbia University, Ph.D. from Carnegie Mellon University both in computer science, as well as honorary doctorate degrees from both Carnegie Mellon and the City University of Hong Kong. He is also a fellow of the Institute of Electrical and Electronics Engineers (IEEE). In the field of artificial intelligence, Dr. Lee founded Microsoft Research China, which was named as the hottest research lab by MIT Technology Review in 2004. Later renamed Microsoft Research Asia, this institute trained the great majority of AI leaders in China, including CTOs or AI heads at Baidu, Tencent, Alibaba, Lenovo, Huawei, and Haier. While with Apple, Dr. Lee led AI projects in speech and natural language, which have been featured on Good Morning America and in The Wall Street Journal. He has received 10 U.S. patents, published more than 100 journal and conference papers, and written seven top selling books in Chinese. He has over 50 million followers on social media.

Stephen A. Orlins: Good afternoon. I’m Steve Orlins, president of the National Committee on U.S.-China Relations. Today I am joined by my friend Kai-Fu Lee. He is currently CEO of Sinovation Ventures, a company that focuses on AI. He is also the author of a book that came out last week, called AI Superpowers: China, Silicon Valley, and the New World Order. It is a must-read for those interested in U.S.-China relations, and a must-read for those who are interested in AI. Kai-Fu, why this book now?

Kai-Fu Lee: Well, I’ve been an AI researcher for a long time, and I have worked in the U.S. and China. And I’m seeing a lot of excitement and a lot of challenges ahead of us. I’ve done AI as a researcher, a product executive, and an investor now. And I think AI is taking off faster than we think. China is becoming an AI superpower. With the U.S. and China, there is a lot of complementarity, and we face a lot of similar challenges. And there are a lot of approaches that could be shared. So I thought I had that unique perspective to write a book that describes that.

Orlins: Is this something which the U.S. and China are going to cooperate on in the future, or compete on?

Lee: I know everyone thinks about this as competition, but it really isn’t. The U.S. is stronger in research; China is stronger in implementation. So they could learn, at least from each other. And also, I think China is building Chinese products for Chinese people, Chinese VCs funding Chinese companies doing Chinese products for Chinese people, American VCs funding American companies building products for the developed countries. The two don’t collide, so it’s not a zero-sum game, not as though the growth of one side would shrink the other. So given they’re in parallel, theoretically, this should be a wonderful collaborative opportunity.

Orlins: You focus a lot on, kind of Alipay or WeChat Pay. How does that change the landscape for AI in China versus the United States, where we still are heavily reliant on a credit card system that seems quite old and outdated when you’re in China?

Lee: It’s a very unique opportunity for China to leapfrog. The U.S. had the world’s most leading transaction tool, which was the credit card, but it became outdated. It charges too much, it’s inconvenient, it’s only customer to merchant. In China, with WeChat and Alipay, anybody can pay anybody. We can do micro payments and there are no fees, almost no fees, so the 2% extra charge is almost like a tax on the American economy charged by the credit cards. But with respect to AI, now everybody, including WeChat and Alibaba, but also, if you build an app, you know who your customers are, and what they paid and why. And if you’re a retail shop and people scanned you, you know who pays you and why. There are even beggars in the street holding up a sign, “Scan me and give me money,” and they know who paid them and why. So I think this is creating a huge amount of data that will help AI.

Orlins: How will it be used?

Lee: Well, each merchant will get data with respect to his or her business, and it may or may not include the customers’ name. You may have to go to extra steps to solicit user consent, but in the end, if you’re able to get user consent, you will know who came to your store, what they bought, on which day, and from which, you can make better sales projections, product placements…

Orlins: But doesn’t a credit card receipt do the same?

Lee: A credit card receipt does not give the same organized information. Nor does it give a channel to communicate. So if you came to my store and bought this book, and I got you to sign up for my WeChat accounts, I can send messages to you. I can say, “We have a sale today.”

Orlins: So it’s the merchant, as opposed to the credit card company that has that data?

Lee: That’s right. The merchant has it. Obviously, Tencent has it, and both can use it to datamine and make better decisions that help the companies make more money.

Orlins: Are Tencent and Ali going to be the focus of AI development in the future in China?

Lee: They are the two strongest right now. In the future, I think there are a lot of opportunities, because there are many other spaces that are not contiguous to this space, the payment space. Tencent is very strong with social gaming and now, payment. Alibaba is very strong with commerce and now, payment. But there will be health care, medical, there will be manufacturing, there will be transportation. So I think there are many other areas where new companies still could emerge with the data and the AI and the monetization.

Orlins: Who will be the leaders in the U.S? What companies will lead that in the U.S?

Lee: Well, Google currently leads in the diversity of their products, the amount of data they collect, and also the AI expertise they have accumulated. After that, there is Facebook, Microsoft, Amazon. So it’s a similar situation, except that in China, I think the data collection goes a little deeper, because the Chinese people use the phone more aggressively for more services.

Orlins: How can we use AI to improve the U.S.-China relationship?

Lee: Well, the academics in the U.S. and China are wonderful friends. If you go to NIPS (conference on Neural information Processing Systems) or one of the AI conferences, you will see that the connections are good. The sharing is very open, so that could be an inspiration to the parts that may not be focused on it.

And I think the National Committee could publish more information that the U.S. and China are not competing in AI in a commercial sense. And also, that they each have something to offer. And that’s why I wrote this book: to let people know that, while the media, and some politicians, have focused on U.S.-China competition— even using terms like “cold war” and describing this as a zero-sum game, but, in fact, both countries are doing great. There’s a lot of sharing, there’s very little competition academically or commercially. So I don’t think we should continue to represent this as a war.

Orlins: Ultimately though, your book, the message, I think, was more about AI and it’s future rather than U.S.-China relations. Can you tell us what that message is?

Lee: Sure. I think the U.S. and China will be a dual-engine that propels AI forward. AI will be a huge technological revolution, even bigger than the Industrial Revolution. It will have a lot of consequences, create a lot of value and wealth, but it also brings about a lot of challenges. I think one of the biggest challenges would be AI’s ability, within a single domain, to outperform humans in routine tasks. And that would lead to a loss of jobs at perhaps too fast a pace for AI to create jobs, such as other technologies did.

Orlins: And the message is that the U.S. and China both confront the same problems, and that the resolution of those problems are complementary, not conflicting.

Lee: Absolutely. I think this is not the China-only problem. Some people think it’s robots replacing assembly line workers was more of a China problem, but it’s actually AI algorithms replacing routine jobs including telesales, telemarketing, dishwashing, and…

Orlins: Radiology, I thought was a very interesting one. The radiologist, a highly educated individual is being replaced by AI.

Lee: Right. That may take a little longer time, but definitely their job is routine. Most of their job tasks are routine. So when those displacements happen, the question is: how to create new jobs, how to tax the ultra-rich—or is that the right solution? I think the two countries’ policy fronts should at least consult what the other is doing. I think more countries should provide their best practices to be shared, as far as what companies can do, individuals can do, and what governments can do. What we all have to lose as humanity is much larger than what any one country can do to threaten another country.

Orlins: And which is ultimately the human aspect of it. I like the conclusion which is there are things that AI can never replace, which is the human, the emotional part of what life is all about. And you talk about what went on in your life and led you to kind of realize that.

Orlins: I won’t give away to the audience what that description is, but this gives you a taste of what Kai-Fu Lee’s new book, AI-Superpowers is about. It is a must-read, there is no other way to say it. For anybody who wants to think about the future of U.S.-China relations, or understand AI, you have to read this book. Kai-Fu, thank you for writing the book, and thank you for being here. 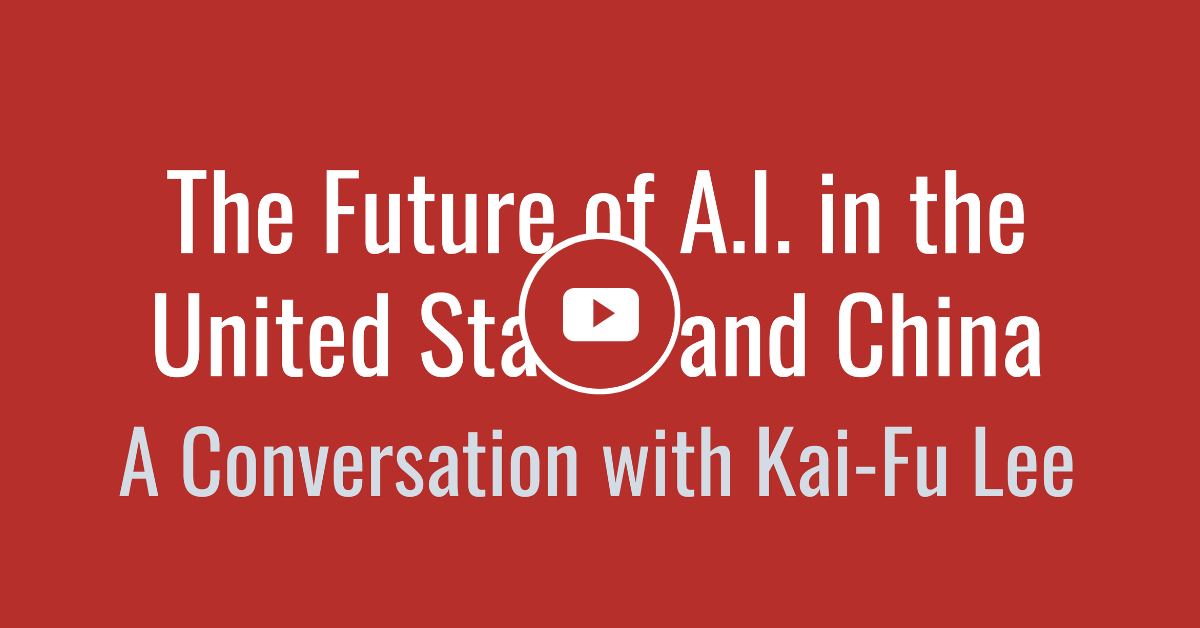 Kai-Fu Lee on the Future of AI in the United States and China | U.S.-China Insights

Kai-Fu Lee explains how China has rapidly caught up with the United States on artificial intelligence, accelerating AI innovation and implementation into our daily lives.