The Paris Climate Agreement marked a breakthrough in international cooperation on climate change, with 196 states and the European Union negotiating a pact in December 2015 to mitigate greenhouse gas emissions. The United States and China, the top two emitters of greenhouse gases on the planet, announced their intentions to join the agreement in April 2016. Since then, President Donald Trump has vowed to withdraw from the agreement, while China has reaffirmed its commitment to meeting the targets outlined within.

Dr. Kelly Sims Gallagher of The Fletcher School of Law and Diplomacy, Tufts University, and a senior policy advisor on science and technology to the Obama administration during the talks, provides insight into the negotiation process. She describes the steps taken to reach the agreement, and the alternating progress and stagnation in Chinese and American climate policies in the years since.

Kelly Sims Gallagher is professor of energy and environmental policy at The Fletcher School of Law and Diplomacy, Tufts University, where she is also the director of the Climate Policy Lab and the Center for International Environment and Resource Policy. From June 2014 to September 2015, she served in the Obama administration as a senior policy advisor in the White House Office of Science and Technology Policy, and as senior China advisor in the Special Envoy for Climate Change office at the U.S. State Department. Dr. Gallagher is a member of the board of the Belfer Center for Science and International Affairs at Harvard University. She is also a faculty affiliate with the Harvard University Center for the Environment, a member of the Council on Foreign Relations, the executive committee of the Tyler Prize for Environmental Achievement, and serves on the board of the Energy Foundation.

Margot E. Landman: In November 2014, Presidents Barack Obama and Xi Jinping issued the joint announcement on climate change in Beijing. What did the announcement say, and why was it significant?

Kelly Sims Gallagher: So that was the first time the two countries ever decided to cooperate together on climate change. And up until then, you know, some people argued that the two countries were, you know…had a suicide pact, that they were both using the other as an excuse for inaction. The U.S. Congress had said, “We won’t ratify the Kyoto Protocol because China isn’t doing enough and doesn’t have the same responsibilities.” And the Chinese found it hard to take on responsibilities with the U.S., who was then, at the time, the biggest polluter in the world, not taking action. And so they both were using each other as an excuse for inaction. And as a result of that announcement, the whole world came together a year later and agreed on the Paris Agreement on climate change.

Landman: You just mentioned the Paris Agreement which brought almost every country together, making a serious, concrete commitment to addressing climate change. Could you tell us how China and the U.S., starting with China, proposed to approach climate change and what the two counties have done since December 2015?

Gallagher: So, the Paris Agreement took a very different approach from previous rounds of the International Climate Negotiations. In the past, countries negotiated the targets with each other. And so, there was a lot of pressure. You know, the U.S. would say to China, “You should do more. This is what your target should be.” Or the U.S. was telling Europe, “You should be doing this.” And, of course, that didn’t work very well. So, after the failure of the Copenhagen talks in 2009, there was sort of a collective stepping back and a decision to try to do nationally-determined contributions, as they’re called, NDCs. And that was a very important principle in the U.S.-China negotiations. These would be nationally-determined targets.

Gallagher: Before Paris. That was before the 2014 announcement. So as the two countries negotiated that agreement, and I was on the negotiating team for the United States, we often returned to that principle. That it was important that these countries be…or that these commitments be nationally determined. And so, actually, by the time all the countries arrived in Paris for that final round of negotiation, almost every country already had its target on the table. So the negotiations were not as difficult as they had ever been in the past.

Landman: And how has China been doing?

Gallagher: China is right on track. They actually have faithfully implemented everything that they said they would do. Actually, in the context of the 2014 announcement, and there was a subsequent joint statement in 2015, where they announced a bunch of domestic policies, for example, they decided to establish a national emissions trading regime for their power sector. And they did establish that last year. So they have actually been faithfully implementing the target, so far.

Landman: And now we get to the contrast. The Trump administration has clearly had a very different view of the existence and significance of climate change than previous American administrations. What policies have been adopted that demonstrate that different view?

Gallagher: Well, all of the policies that the Obama administration put into place were regulatory policies. They were using their authorities under the Clean Air Act, primarily, and the Energy Security Act, to issue efficiency standards or CO2 performance standards. And the Trump administration has tried to roll back all of those. It’s not clear that they actually will be able to ultimately do that, but at this point, a lot of those regulations are tied up in the courts. So, there has certainly been an attempt at undoing much of what the Obama administration had done. I’d say one thing that hasn’t changed actually, was that Congress had put in place tax incentives for renewable energy. And those remain in place and have been untouched. So I think that’s one reason why we still continue to have pretty fast growth in solar and wind deployment in the United States.

Landman: You write in your book about the role of the states in the U.S. in moving ahead to address climate change, even when the federal government is trying to make these rollbacks. Given that in China such policies are issued at the central level, how does that mismatch of levels work in practice? China is very conscious of hierarchy and pays attention to protocol. The central government of China should be dealing with the federal government of the U.S. Has China been willing to work directly with individual states or consortia of states? How does that work?

Gallagher: Yeah, so I should have mentioned that the state level in the United States, there’s been this big movement called We Are Still In, as in we are still in the Paris Agreement. And about 50% of the U.S. population lives in states that have said they will commit to the Paris Agreement goals. So the states are actually really rising to the occasion right now in the United States. And of course, they’re very important venues for climate policymaking, and constitutionally, they have the right to develop and impose their own policies. And in particular, California and New England have done a lot. But I’d also point out some relatively conservative states like Texas, or Colorado, where I’m originally from, have really had very strong support policies for clean energy. Now, you’re right, that on the Chinese side, it’s very different. You know, they don’t have a constitutional separate-but-equal power structure. It’s totally hierarchical. That being said, many of the provinces in China have been encouraged by the central level to go beyond the official Chinese government target. And a lot of provinces and even cities formed an association of Peaking Pioneer Cities. And the idea was they would try to demonstrate to the rest of the country how they could peak their emissions earlier than 2030, which is the Chinese target. So there’s a lot of encouragement and support from the central government level for there to be experimentation at the provincial level. And as you know, that’s a common feature of how China does policies: experiment at the, you know, lower levels and then bring it to the national level.

Now, to your question about U.S.-China cooperation, it has been very interesting to see in the last couple of years an attempt by former Governor Jerry Brown, to negotiate and partner directly with President Xi Jinping. Interestingly, when Governor Brown hosted the Global Climate Action Summit last fall, the Chinese government at the central government co-sponsored that conference and sent, you know, a minister to be one of the keynote speakers. So there has been actually a kind of rise of the states to conduct that foreign policy in the absence of any at the federal level in the United States.

Landman: So, how are we doing? We, both countries, the two largest emitters of greenhouse gases. Are we making sufficient headway to avoid, if not a catastrophe, the very serious negative consequences of climate change?

Gallagher: Well, yes, we are making…actually, we are making progress but not fast enough. I wouldn’t give up hope yet. I think there’s still a good chance that with leadership from the two countries, we can actually turn the tide. The U.S. has actually been on a downward trajectory for quite some time. However, last year, there was a three percent jump, which was the biggest jump in a long time, an increase.

Gallagher: Our target is 26% to 28% below 2005 levels by 2025. So we were actually kind of on track until this three percent, you know, jump upward. I think that’s reflective of the fact that, you know, all of the policies are being tied up in the courts or dismantled. You know, and also probably there’s just less national effort. Everybody knows the pressure is off because Trump has announced he’d like to withdraw the United States. China also had a jump last year after a plateau of three straight years. There was no growth for three straight years. So, many people thought maybe China had peaked, well in advance of its target, which was 2030. I think most of us believe China won’t peak prior to 2030. I think that was a conservative target, them wanting to be sure that they could peak.

Landman: What accounts for the increase last year?

Gallagher: We don’t know yet. It’s really early to tell exactly what happened. Many people think it’s probably because the Chinese are trying to stimulate the economy. And so there was a return to some of the more traditional sectors as they were trying to rev up the economy again.

Landman: Well, given the latest economic figures, that may not bode well for this year.

Landman: All right. Unfortunately, we’ve run out of time, but thank you very much for talking with me today.

Gallagher: And thanks for having me. 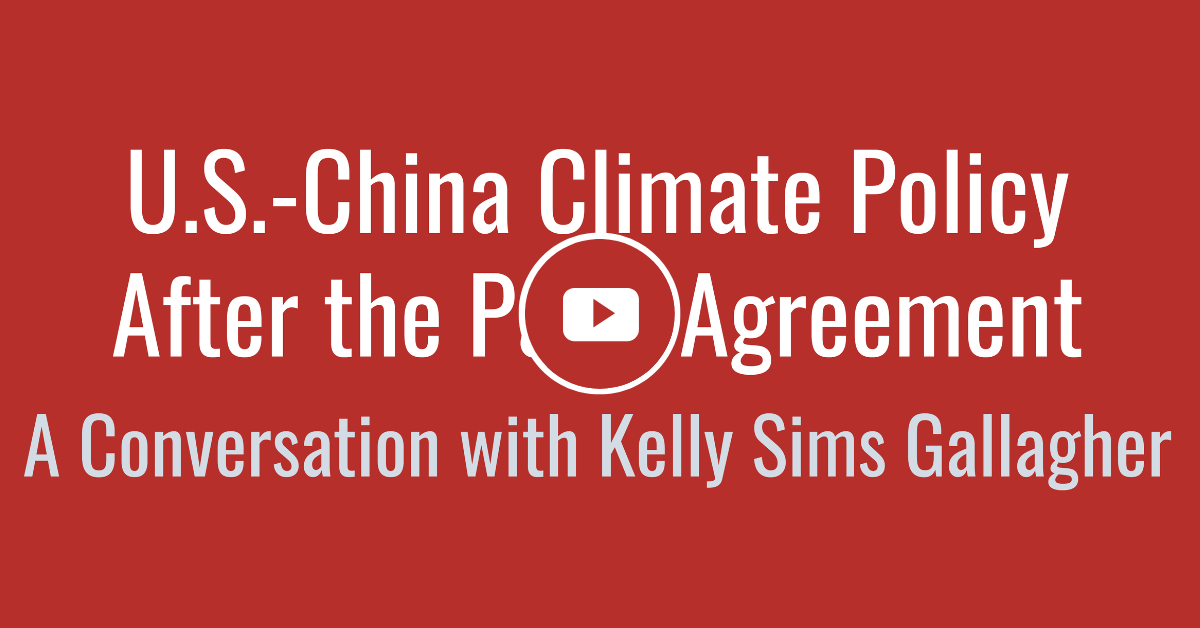 Dr. Kelly Sims Gallagher of Tufts University examines Chinese and American climate policies in the years since the Paris Agreement.