Advocating for the LGBTQ community takes different forms in the United States and China, with domestic politics and cultural norms influencing how organizations raise awareness and provide services in each country. One of the leading LGBTQ rights organizations in the United States is the Human Rights Campaign (HRC), whose director of global, Jay Gilliam, participated in the National Committee’s Professional Fellows Program in 2018. Through this two-way exchange program for emerging NGO leaders, Mr. Gilliam spent two weeks at the Zhitong Guangzhou LGBT Center, where he learned about the organization and shared insights from his work at HRC. I

n this interview, he explains the differences between HRC and Zhitong’s programming, how healthcare and LGBTQ issues intersect, and social attitudes toward the LGBTQ community in both countries.

Jay Gilliam is director of global at the Human Rights Campaign (HRC), where he leads HRC’s global work alongside advocates, organizations and movements around the world to advance LGBTQ equality everywhere. Prior to joining HRC, Jay served at the U.S. Agency for International Development (USAID) for nearly five years working in the Bureau of Policy, Planning and Learning, the Bureau for Legislative and Public Affairs, and in the Office of the Senior LGBT Coordinator. In these roles, he shared how the Agency does more effective work and maximizes its impact in the development space; led USAID communications and public engagement efforts on LGBT inclusive development work; and developed stories about the hard work done around the world to end extreme poverty.

Amanda Walencewicz: Can you give me an introduction to Human Rights Campaign and your role there, and a bit about Zhitong Guangzhou LGBT Center, the organization you were placed in through PFP?

Jay Gilliam: Sure. Well, the Human Rights Campaign is the nation’s largest advocacy organization for lesbian, gay, bisexual, transgender and queer issues. And we are working to ensure that the rights of LGBTQ people are enshrined in our national law. We also work to make sure that the daily institutions of LGBTQ people, whether that is at home, in schools, at work, are safe places for people to be able to come out and be their authentic selves. And then also to make sure that we are raising awareness and educating the public about LGBTQ people and the challenges that they face in making sure that we can make this country a better place for LGBTQ people to work, to live, and to just be who they are in all of their authentic selves. And so, I’m very proud to be able to work here and be able to connect with advocates from around the world through our global program. And we were able to connect with a fellow in China through the Guangzhou LGBT Center. And that organization there, I learned, with working through the fellow, it’s really a regional and vocal organization that supports the LGBTQ community in Guangzhou. And so, they offer services, in terms of support groups, in terms of services around health care and HIV issues. And so, they’re really there to support the local LGBTQ community in Guangzhou.

Walencewicz: What kind of work does the Zhitong Guangzhou LGBT Center do and how were you a part of it while you were there?

Gilliam: Sure. So, like I said, they give a number of support groups and services. So, they have support groups for Chinese people who are just coming out. They have support services around safer sex issues, support around people who might be newly infected with HIV, and need to find the resources, and medication, and treatment that they need there. And so, while I was there, I was able to connect with, through the fellow, a number of the staff that work there, as well as a number of the volunteers that are part of that organization. And particularly, we were able to share from HRC a couple of our programs that might be able to help build the capacity of the Zhitong Guangzhou LGBT Center. So, one of those programs that I connected with the fellow and the center there is our HIV 360 program. So, our HIV 360 finds people from across the U.S., and really builds their capacity to be stronger leaders in their local communities, to work with people to get safe treatment for HIV, to raise awareness around safe sex and the issues, to make sure that we get down to a zero emissions rate around HIV, and making sure that everyone who has it is treated. And so, while our fellow was here in DC, at HRC, they got to learn a little bit more about this program and was really interested in the model that we use to connect people from around the U.S., and train them to be stronger leaders back where they are.

And so, while I was in Guangzhou, I was able to connect with the volunteers of the center, share a little bit more about our HIV 360 program, and have a discussion around how they could use that model to connect with other advocates in the region of Guangzhou, and train them to be stronger advocates where they are, in terms of spreading awareness around HIV. So, that was one of the things that I was able to connect with the center while I was there. The other is, again, related to health. And our fellow was really interested in HRC’s Health Equality Index. I mean, our Health Equality Index or HEI, is a metric, the tool that we use to hold hospitals, insurers, and other healthcare providers accountable to their LGBTQ staff, to their LGBTQ patients, to make sure that they are providing services that are for us, that benefit us, so that we can bring our whole selves into our healthcare provider. And our fellow had already connected with one local hospital in the area that they could provide services to the LGBTQ community, and so, we wanted to expand the work that they’re doing there. And so, I talked about how we are using the HEI and working with the healthcare industry here to provide better care for our community. And I was able to, again, share that with the staff and volunteers of the center in China, and talk about ways that they might be able to expand from that one hospital that is currently providing really open, honest, transparent care for the community, and try to reach out to other healthcare providers in the region to be able to do that as well.

Walencewicz: What were some of the differences between HRC and Zhitong, both in the scope of their work and how they carried it out?

Gilliam: Yeah. I mean, well, one big difference is, HRC is a national organization, and so, we are really working on laws and advocating on protections through the legal system. And the Zhitong Guangzhou Center is really focused on providing support and services for the local community. So, that is just one big difference in how our organizations are focused on promoting LGBTQ equality. But I think another is just in the environments where we are working. Obviously, here in the U.S., we are a free, democratic society with an open market system and so, there’s a natural way for people to come together in free assembly and advocate for rights and protections that we want, and do that through a legal democratic process, through rule of law, through trying to propose new laws and protections that way, and getting public support for that, and rallying people together, to get those passed through different legislatures, passed by the President. And one thing that HRC has also done is use the free market and businesses to help rally us together and sign on in support of LGBTQ protections in the workplace, through judicial systems, and through supporting legislation. And obviously, that’s not something that is possible in China. And so, that is just another big difference in the way that both of our organizations are working in the environments that we are in.

Walencewicz: In the broader sense, what was your impression of how attitudes towards LGBTQ rights in the U.S. and China differ? And how do those societal attitudes impact how nonprofits like HRC and Zhitong function?

Gilliam: Sure. Well, I think, you know, there are quite a lot of similarities. There might be differences, in terms of where we are in our movement work, but kind of going back to the stigma. In China, obviously, there’s still a lot of stigma, in terms of being able to be out as part of the LGBTQ community, and not being visible to be able to do the work, to show that we are here, that we deserve protection, and to be treated fairly and equally just like everyone else. And we all have also had that problem in the U.S. We continue to make sure that all parts…every part of U.S. citizens are able to be out, whether they are a part of a migrant community or are a part of the African American community or Asian American. There’s lots of different parts of our communities that might have different challenges to being fully out. And we still, I think, are trying to be fully out and share that with folks in China. I mean, so that’s one similarity in terms of our work. But obviously, I think there are also lots of differences, in terms of, like I said before, the different environments we work in, in terms of the U.S. being democratic and being able to freely advocate for those rights. And obviously, in terms of the scope, where, like I said before, HRC is kind of a national organization. It can focus on those big-picture legal issues and it can help do public education, and raise awareness around LGBTQ issues. And where Zhitong is really focused on is the support and services of the people in the immediate area. And I think, you know, in China, it’s probably going to be very difficult to have a broader national movement that can really come together because the environment is not really conducive to be able to do that work.

Walencewicz: And do you know of any national LGBT organizations in China or is your knowledge, mostly, there’s a lot of small regional ones?

Gilliam: Yeah. I think there are a lot of small regional ones. You know, there are a couple of ones that I think have a lot of prominence throughout the country. So, one is like PFLAG China, that I was able to meet with them, and they have a lot of support from family members that have LGBTQ members of their family and those family members supporting them. And I know that they have probably one of the larger memberships of an LGBTQ organization in China. But the ones that I’m kind of aware of, are really kind of working at that local or regional level, providing support and services, and getting people really comfortable to come out, creating space for them to do that, creating space for them to connect with others that are like them, and just being able to share those experiences, as well as, like I said, services around healthcare are really important there.

Gilliam: Yeah. And I think, you know, the environment that those Chinese citizens find themselves in, it isn’t very conducive to do much more than that.

Walencewicz: Well, great. Well, thanks for talking with me today. 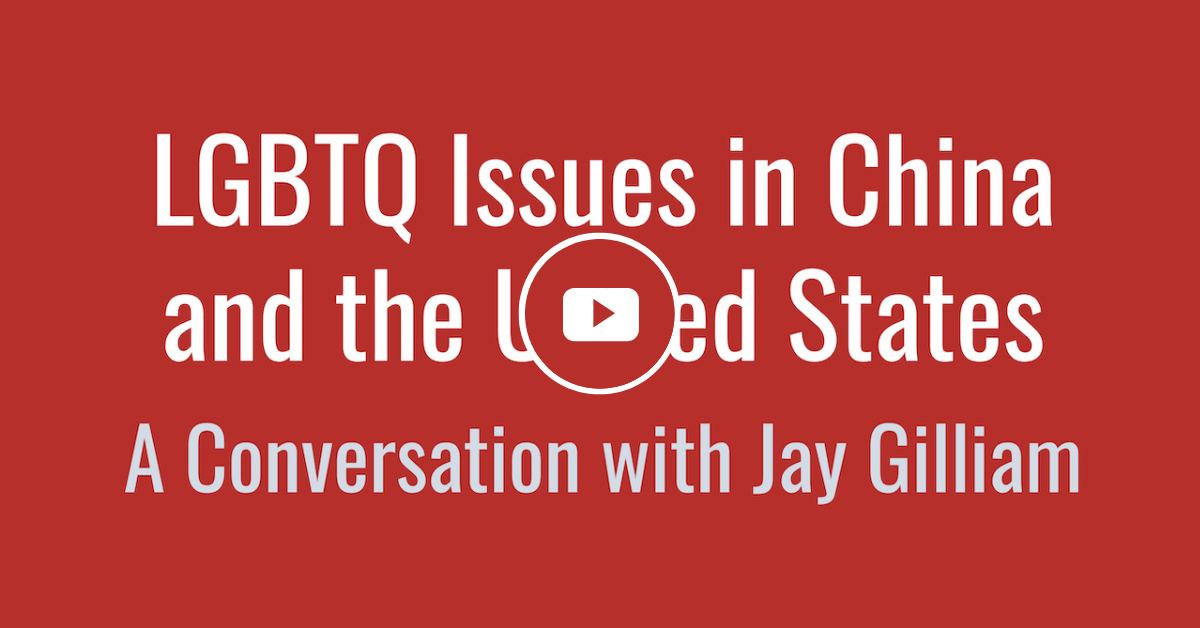 LGBTQ Issues in the United States and China: A Conversation with Jay Gilliam | U.S.-China Insights

Jay Gilliam explains social attitudes toward the LGBTQ community in both the United States and China.