What can food teach us about history, immigration, and international relations? For Lucas Sin, chef and culinary director of Junzi Kitchen, food is a window into a larger world, one where Chinese and American culture and history collide, mix, and transform. From four-thousand-year-old noodles to Nixon’s 1972 “chopstick diplomacy,” from the creation of the original Americanized Chinese food to the modern proliferation of regional and fusion styles, Chef Sin discusses the evolving landscape of Chinese cuisine in the United States, and its ability to change perspectives by sparking connections between people.

Lucas Sin opened his first restaurant when he was 16, in an abandoned newspaper factory in his hometown of Hong Kong. Despite spending his Yale undergraduate years in the Cognitive Science and English departments, Lucas spent his weekends running restaurants out of his dorm, known as Y Pop-up. After stints at Michelin 3-star Kikunoi Honten in Kyoto and Modernist Cuisine in Seattle, he is now on a mission to revitalize Chinese cuisine in the United States as the chef and culinary director of Junzi Kitchen.

Bridget Donovan, Communications and Productions Assistant: How has Chinese food in places like New York changed in the past five, ten, or fifteen years? What are some misconceptions that Americans still have about it?

Lucas Sin: Well, a lot has changed in the Chinese food scene in New York City specifically in the past fifteen years. Broadly speaking, the trend is that people are more and more aware of regional Chinese cooking, that they’re able now to ask themselves not only what is Chinese food, but what are the different types of Chinese food. And Therefore, within the last fifteen years or so, the big boom in places like the East Village, or in Sunset Park, or whereever, have been regionally-specific Chinese cooking, much quicker than you might have imagined. I think a lot of this probably started fifteeen years ago…almost exactly fifteen years ago now. As Xi’an Famous Foods came out of Flushing, opened a restaurant, and took the world by storm, people realized that Chinese food was beyond rice, General Tso’s chicken, chop suey, what have you, and you actually had cumin lamb, very specific cooking from very specific parts of China. That really opened a lot of New Yorkers’ eyes, and I think we’re really riding that trend and riding that wave with restaurants like Junzi.

Donovan: Any other misconceptions besides chicken and rice?

Donovan: Sure. Why do you think it’s important to challenge Americans’ perception of Chinese food?

Sin: Well, here’s the thought. If you were to better understand Chinese food, your own sense of cuisine, whatever culture it is, will improve. I think, due to a variety of historical circumstances, Chinese culinary culture stopped being exported out of China while other cuisines were flourishing. Japanese cuisine is a really good example: it almost came out of nowhere, and now it’s known as a very exquisite, very detail-oriented, and very, sort of, mystical, magical cuisine. Japanese food has a super-deep history; chinese cuisine also has a very deep history. There’s a huge slew of well-cataloged techniques of Japanese cuisine. The same thing can be said for Chinese cuisine. I mean, the other day we found a 4,000-year-old noodle, vacuum-sealed urn somewhere in China. If we found a 4,000-year-old noodle, that means that we’ve been making noodles for over 4,000 years. If we’ve been making noodles for 4,000 years, can you imagine all the other things we’ve been doing in between to innovate in the culinary space? Chinese food is so deep and so rich, and because of whatever circumstances, people tend to think of Chinese food as too simple, as one thing. But I think it’s always good to see the diversity, the color, and the different set of wonders that comes within Chinese cuisine.

Donovan: Is this part of the motivation for Junzi Tastings? [Note: as of November, 2019, Junzi Tastings is now called Chef’s Table.]

Sin: Yeah, for sure. I do these tasting menus once a month in our restaurants during the fast-casual service. The idea is to always do something along the lines of Chinese X ‘whatever.’ And you can put anything into that ‘whatever’ slot, and always find something interesting to talk about. The reason we think that is, number one, Chinese food has touched almost every element of anything, of all time, because Chinese people are everywhere and a lot of them cook. The second is that if you understand more about Chinese cuisine, then you’ll learn more from anything that it touches and it’s crossed over with. So what we do is, over five to seven courses, we take ourselves way too seriously, we dive into a super-deep exploration of a specific topic, something like Chinese food X Japanese vinegar. So your question then is, how did Chinese food impact Japanese vinegar, and vice versa? And from there you draw a five to seven-course meal. That meal can tell the story of that interaction and the confluence, and so people get a tangible understanding of this little piece of history and culture.

Donovan: So then, do you see food as a narrative medium?

Sin: Sort of. I suppose so. It’s hard… Well, let me start that again. In order to understand another culture, it’s often easiest to start with the food, because if you like the food, it’s hard to hate the rest of the culture, since food is certainly part of it. It’s a good entry point. It’s a good way to start telling people stories. I certainly wouldn’t say that food is the end-all be-all of all narrative, definitely not, but it’s a really good way to teach somebody something about the history that’s behind a certain dish they’re eating.

Donovan: To that end, do you see the narrative that you’re trying to put forward with Junzi as offering a different story the larger media, or the current political and social U.S.-China narrative?

Sin: I would be very careful to say… Well… a lot of it is about engagement. And, again, if you can engage with the cuisine, then it’s harder for you to not engage with the culture at all. It’s a really good entry point. It’s a really good place to start a conversation. It’s interesting because what I’m thinking about now are moments like the Nixon in China dinner. Interestingly, we actually recreated it recently for MOFAD, for the Museum of Food and Drink. And the idea there is that, once upon a time, huge political moments could have been played on this culinary stage. Food was a good way to connect with people even when the stakes were so high.

Then on the other hand, from the other side, you see moments where people who were trying to challenge the relationship between the United States and China would place texturally difficult dishes onto the table, to challenge Nixon, to see if he could hang, basically. And so, again, that’s not to say that that texturally difficult plate of jellyfish caused any political movement, but to say that it is a good place to start a conversation and to use it symbolically for all of these sorts of things.

Donovan: Fascinating. On different topic, you have Junzi locations at, well, Yale was the first one. And now there’s one right by Columbia, there’s one at NYU, and you’ve recently opened one in Midtown. But with so many locations at U.S. universities, what do you think is the link between American academic institutions and cultural exchange?

Sin: Well, it’s important to note that the change in the waves of immigration from China into the United States, many of the people who are coming here to the United State from China now are coming for education at places like universities. Those are the types of people that eat at a lot of our restaurants, and it’s really wonderful cooking for them because they get it, and they’ll tell other people that they get it. Because we’re one of the few restaurants to try to bring some Northern Chinese flavors into our dishes, for example, people who are coming from Northern China will be surprised when they’re going to school at Columbia, and [after tasting our food] go, “Oh, actually this reminds me of home.” That’s really nice to hear.

But these days, a lot of these people who are going to universities that we meet in these communities are the same people who are trying to open new restaurants here in New York, too. The Chinese immigrants who are opening Chinese restaurants today aren’t only just people who came here because they had nothing to do but to open Chinese restaurants. They’re coming here to open restaurants that say something, that tell a story, that are heavily stylized or really interesting, and all these things. So it’s good to be a part of those circles. And that’s honestly how Junzi started, how we all met, was at a university. So it feels a little bit at home for us, and we’re really excited to cook in those types of circles.

Donovan: Lucas, thank you so much.

Sin: Thank you for having me. 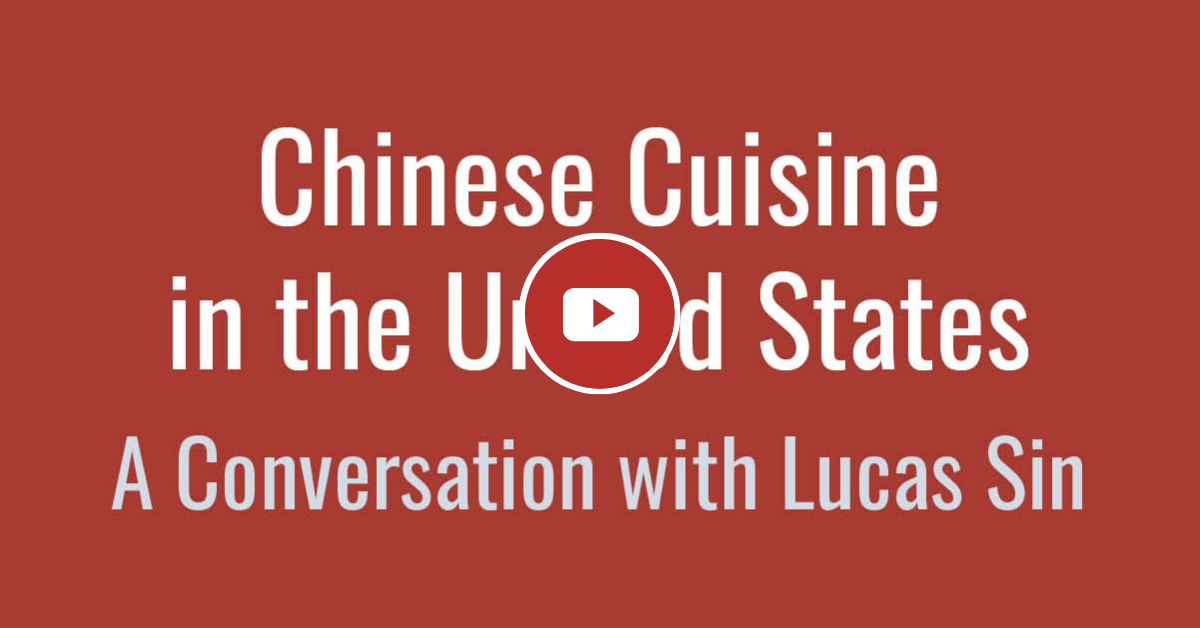 Lucas Sin discusses the evolving landscape of Chinese cuisine in the United States, and its ability to change perspectives by sparking connections between people.