Dr. Jennifer Ho is the director of the Center for Humanities & the Arts at the University of Colorado Boulder, where she also holds an appointment as professor of ethnic studies. She is the daughter of a refugee father from China and an immigrant mother from Jamaica. She is the president of the Association for Asian American Studies and the author of three scholarly monographs, including Racial Ambiguity in Asian American Culture (Rutgers University Press 2015), which won the South Atlantic Modern Language Association award for best monograph.

In addition to her academic work, Dr. Ho is active in community engagement around issues of race and intersectionality, leading workshops on anti-racism and how to talk about race in our current political climate. You can follow her on Twitter @drjenho.

Frank H. Wu is the president of Queens College, former president of the Committee of 100, and a former litigator and professor of law. He is a frequent public speaker and the author of, Yellow: Race in America Beyond Black and White. Wu earned his bachelor’s degree from Johns Hopkins University in 1988 and his J.D. degree from the University of Michigan Law School in 1991. In 2006, he completed the Management Development Program at Harvard University Graduate School of Education.

What is the ‘model minority’ myth?

Dr. Jennifer Ho: First of all, as the name describes, it is not something that is actually real, despite what people want to believe about the supposed success of Asian-Americans as a racial group. It is also a term that was coined in the 1960s by a white journalist. So, it is also not something that’s coming from within the community, unlike the phrase ‘Asian-American,’ which actually was a label that was created by Asian-American activists and organizers in the late ’60s and early ’70s as a way to get away from the term “oriental.” If there’s anyone out there who’s still using the term “oriental” to refer to people of Asian descent, please stop.

So, the first thing is that the ‘model minority’ myth isn’t true. Asian-Americans are not succeeding because there is something inherent to us or our culture, despite what people like Amy Chua might think. The second thing is, it’s not true that Asian-Americans are this undisputed success story. When you start to drill down into Asian ethnic groups and you look at the rates of Southeast Asian communities, like specifically Mung, and Laotian, and Burmese, they have among the lowest graduation rates from high school, among the lowest socioeconomic status, among the lowest college attendance.

Frank Wu: The ‘model minority’ myth is hard to explain. It’s the idea that Asian immigrants and their American-born children are smart, talented, hardworking, good at math and science. When you complain, people want to say, “How thin skinned could you be? Why are you politically correct? They’re trying to pay you a compliment!” Yet it’s false flattery. It allows the white-washing of very real problems. It allows people to say, “What are you complaining about? You’re doing better here than you would in your homeland,” of course not realizing that America is our homeland. It’s a way to say that Asian Americans don’t need any help and shouldn’t be shown any solicitude.

It also ratchets up racial resentment. The idea that you’re hard working and an overachiever suggests: “Maybe you’re a little too hardworking. You’re an overachiever. You’re getting more than your fair share. Why are the Asians taking over? They have all the seats of the prestigious institution, all the scholarships. They win every spelling bee and science fair and math competition. It’s all these people named Kim and Yuan and Patel. Where are the real Americans?”

Does the ‘model minority’ myth affect solidarity between minority groups?

Ho: What the model minority myth does, what the journalist when he first used it meant to do, was praise Japanese Americans in the 1960s and to say, “Look at these good, hardworking, quiet, passive people who come to the United States and they don’t cause any trouble.” The subtext of that was, “Unlike the way that black Americans are currently causing trouble for the United States.”

Wu: It’s another way, not even very subtle, of saying to African Americans and other people of color, “Look at the Asians! They made it, why can’t you?”

Ho: Okay, so clearly, we can see [the myth] is damaging because it is somehow creating a binary between Asians as a good minority who are able to succeed, and every other racial minority group—Latinx people, indigenous people, and, of course, Black Americans. I certainly think there are people, not just White Americans, but we can look at Candice Owens, for example, who is using this model minority rhetoric to somehow create divisions between Asian-Americans and black Americans or other racial minorities.

Now, there are plenty of Asian-Americans who don’t believe this and have never bought into this. There have always been individual Asian-Americans who have worked in solidarity for social justice. The poster behind me is of Grace Lee Boggs, who was a notable Detroit activist who spent her lifetime really advocating for the rights of poor people everywhere as well as disenfranchised people everywhere, but especially in her local community of Detroit.

There have always been Asian-Americans who are actively trying to resist the stereotype, who resisted the stereotype before the stereotype even existed. People like Yuri Kochiyama, a Japanese American activist. Very famously, there’s a photo of her cradling the head of Malcolm X when he was assassinated in New York City. And then, in our present day, there are so many Asian American leaders who are fighting on behalf of social justice and especially against anti-Black racism. So, I think we need to say this not to discount the racism that exists in Asian American communities because there is anti-Black racism that exists within Asian American communities, but we need to say this to show that the narrative is always much more complicated than people want to believe.

Wu: For Asian Americans, there’s been the perennial bewilderment in Black-White tensions. With this color line, we’re neither black nor white. Where do we fit in? How can we help? How have we expressed prejudice or enjoyed privilege? How’s it possible to be an ally and yet acknowledge that Asian Americans have had their own set of unique challenges? There is no right answer, but it’s so important to ask these questions.

What might you say to Asian-Americans who are faced with this stereotype?

Ho: What I would say is that I hope, first of all, that if there’s anyone out there who is Asian American identified who somehow thinks that this is a compliment, please be aware that it’s not a compliment. People saying that you are a ‘model minority’ is actually inaccurate. It’s very damaging, and it’s definitely divisive.

Wu: I’m always encouraging Asian Americans to stand up and speak out by bridge-building in coalition with others who share their ideals. You know, many East Asian cultures have an attitude— the best-known version is the Japanese proverb: “The nail that sticks up is pounded down.” 不要找麻烦 [bùyào zhǎo máfan], right? It’s the idea, “Don’t go looking for trouble.” Compare that to the American adage, “The squeaky wheel gets the grease.”

So, for many who have come from backgrounds where there wasn’t civil society, where there hasn’t been civic engagement, they don’t have that tradition. But here in America, it’s necessary. We have to come together. And to say we’re American is to signal that, not just to others, but to say to ourselves: this now is our home. 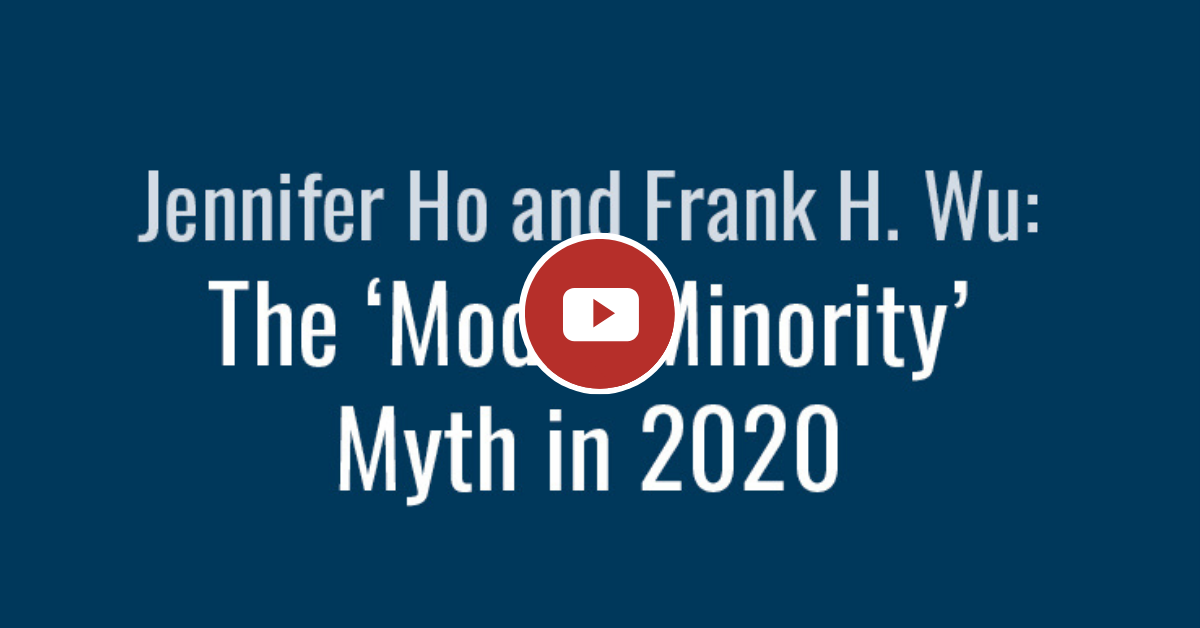