As the Chinese state—under the leadership of President Xi Jinping—continues to exert more control over China’s economy through its policies, prospects for future reforms seem uncertain. Dr. Nicholas R. Lardy of the Peterson Institute explains why economic reform has been so important to Chinese society over the past 40 years and shares his perspective on whether the country’s reform period has indeed ended.

Nicholas R. Lardy, called “everybody’s guru on China” by the National Journal, is the Anthony M. Solomon Senior Fellow at the Peterson Institute for International Economics. He joined the Institute in March 2003 from the Brookings Institution, where he was a senior fellow from 1995 until 2003. He was the director of the Henry M. Jackson School of International Studies at the University of Washington from 1991 to 1995. From 1997 through the spring of 2000, Dr. Lardy was also the Frederick Frank Adjunct Professor of International Trade and Finance at the Yale University School of Management. He is author, coauthor, or editor of numerous books, including Markets Over Mao: The Rise of Private Business in China (2014), Sustaining China’s Economic Growth After the Global Financial Crisis (2012), The Future of China’s Exchange Rate Policy (2009), China’s Rise: Challenges and Opportunities (2008), Debating China’s Exchange Rate Policy (2008), and China: The Balance Sheet—What the World Needs to Know Now about the Emerging Superpower (2006). Dr. Lardy is a vice chair of the National Committee on U.S.-China Relations, a member of the Council on Foreign Relations, and serves on the editorial boards of Asia Policy and the China Review.

Nicholas R. Lardy: I think reform and opening up began in 1979 for a couple of reasons. First of all, Mao had died. There was a tremendous desire to return to more political stability and to a more growth-oriented economic strategy. Secondly, as the country began to open up to the outside, I think China’s top leaders really began to appreciate much more thoroughly the extent to which China had fallen behind, when compared to some of its other East Asian neighbors. Some of them began to travel in the region, and I think they realized that, in relative terms, China had become a very poor country.

Lardy: I think the original goals of the policy were to reverse some very important declines. Food availability in China in 1978 was actually somewhat below where it had been in the mid-1950s. So China had gone for 30 years with declining food consumption, declining living standards. That put a tremendous priority on trying to improve productivity in the agricultural sector. And that’s really where reforms began, in a few provinces where courageous leaders started to allow local initiatives, which essentially dismantled the collective commune structure and returned China to something like private farming. That had the tremendous effect of boosting productivity and output, and was extremely important in the early years of economic reform.

How has the policy affected the Chinese economy and society?

Lardy: I think the policy of reform really has transformed China. The economy is dozens and dozens of times larger than it was when reform began in the late 1970s. Hundreds of millions of people that were living in abject poverty, with inadequate food, clothing, and shelter, have been lifted out of poverty by the rapid growth that has occurred. And, of course, China has become much more open. Tens of millions, if not more, Chinese people are travelling abroad every year, and there’s a great deal more knowledge about the outside world. So I think it would be very difficult to find a transformation as profound as that which has occurred in China over the last 40 years, a transformation that has those socio-economic dimensions.

Does current economic policymaking in China signal an end to reform?

Lardy: I think it’s important to recognize that industrial policy in China, in some respects, can be traced back to the planning system that was adopted from the Soviet Union in the 1950s. They had a State Planning Commission. They drew up goals. They allocated resources to achieve some of the targets in the plan. That began to fade away after 1978; the scope of the plan diminished. The amount of resources controlled by the state began to shrink. The private sector became more important.

But sometime around the global financial crisis, or maybe even a little bit earlier, they began to have a program for development of science and technology. And that led later to ‘Made in China 2025’, which was a much more ambitious industrial policy that was adopted roughly in the first year after Xi Jinping came into power, roughly in 2013. So they’ve moved back towards a system in which state allocation of resources is more important, and the economy is driven by targets and priorities established in Beijing, rather than the result of the decisions of more autonomous private firms.

If economic reform is ending, what direction is China heading in now?

Lardy: I wouldn’t say economic reform has ended. It has reversed in certain respects. It is still moving ahead here and there. The financial sector has had some reform in recent years. But certainly, reform has slowed down. I wouldn’t say it has ended because China has always experimented, and they go back and forth. Sometimes reforms move ahead much more rapidly. Sometimes they slow down. You know, this is captured in the Chinese phrase of, you know, crossing the river by feeling the stones. So reform could resume on a more accelerated pace, but I think it will require some catalytic event. It’s hard to see now what force, what circumstances, would cause reforms to come strongly back on track.

Does the current trade war have any impact on reform?

Lardy: In the midst of this trade dispute between China and the United States, I think it’s important that we do not overestimate the extent to which China is dependent on international trade. I think there’s a view in the administration that China is more vulnerable because they export more to us than we export to them. But China’s dependence on exports has declined dramatically over the last 10 years. They no longer are running a big trade surplus. Exports relative to GDP have declined significantly. More and more of the growth of the Chinese economy is being generated by domestic demand—particularly consumption—which has become the most important driver of China’s economic growth.

So the idea that China is going to accede to any demands that are placed on it by the United States government because they’re so dependent on the trade relationship with the United States, I think is a somewhat misleading approach. 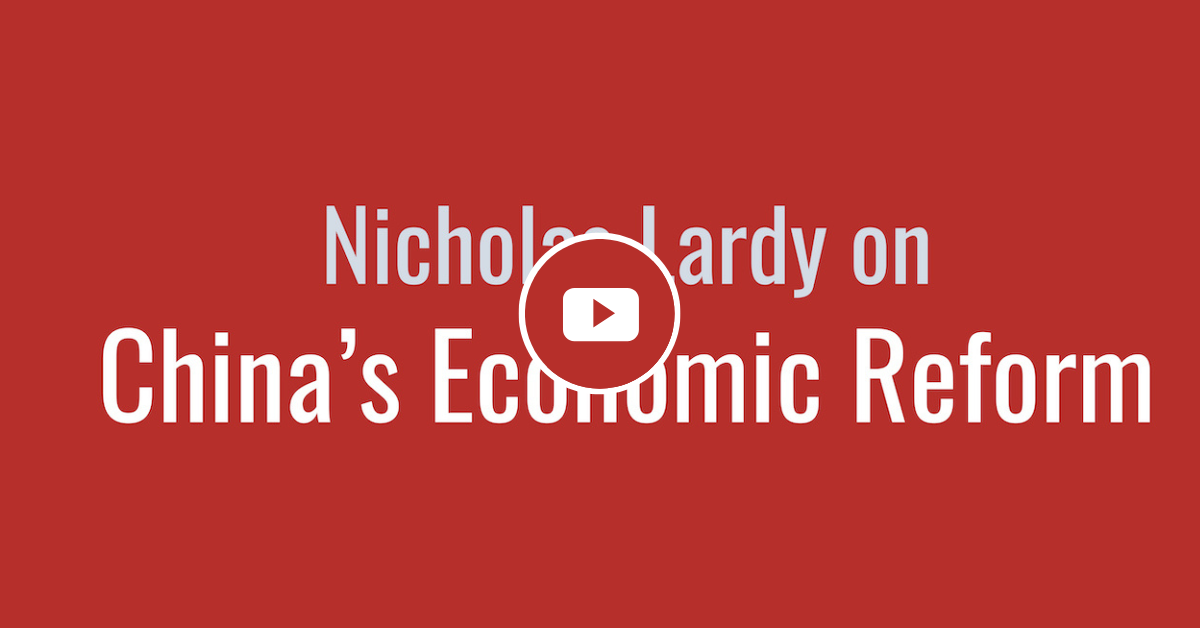 Nicholas Lardy on Economic Reform in China: Past, Present, and Future | U.S.-China Insights

Nicholas R. Lardy of the Peterson Institute explains why economic reform has been so important to Chinese society over the past 40 years.