As the attendance of Chinese students at U.S. institutions of higher education comes under greater scrutiny, Peggy Blumenthal of the Institute for International Education explains the history of Chinese students in the United States, their impact on American institutions, why they come, and how new visa policies may affect their enrollment.

Peggy Blumenthal is senior counselor to the president at the Institute for International Education (IIE), where she has served since 1984 and was chief operating officer from 2005 to 2011. Previously, she was assistant director of Stanford University’s Overseas Studies, and coordinator of Graduate Services/Fellowships for the University of Hawaii’s Center for Asian and Pacific Studies.

How long have Chinese students been studying in the United States?

What are the trends of the past twenty years?

Blumenthal: The first big wave of students after the Cultural Revolution was, again, in science and technology, but often they were graduate students. About 10 years ago, we started to see more undergraduates coming. Many Chinese families were deciding, as they entered the middle class and had more disposable income, that they wanted their young, single child— because of the one-child policy— they wanted their one child to have the best education they could have anywhere in the world. And so more and more of them were sending undergraduates to the United States. Now, there are more undergraduate Chinese than graduate student Chinese in the United States.

Why do Chinese students want to study here?

Blumenthal: We have to look at two different categories of students: First, the full tuition paying undergraduates and business school students. They are coming, I think, because they see American higher education as the best in the world. They are coming because, if they are studying business for example, the credential will be valuable when they go back home, or when they work anywhere else in the world. The kind of education they can get here is much more holistic. It’s not so much rote learning. So a lot of parents find that attractive, and a lot of students, once they’re here, find it particularly attractive that they can explore different fields, explore different majors, change their mind even up to senior year.

Secondly, for graduate students in the STEM fields, in science, technology, engineering, and math, it’s a different calculus, because very often they are receiving financial support from the host institution. Very often they are coming with awards, teaching assistantship or research assistantships, which help pay for that education. They’re coming because, again, America’s science and technology graduate schools are considered among the best in the world. There’s a close relationship between academia and industries, so that they’re able to get hands-on practical training in the major companies in the United States. They also can work on research projects with big-name professors. So there’s a lot of attraction, in addition to the fact that they’re getting full support for their education, very often.

How will new visa policies affect the flow of Chinese students into the United States?

Blumenthal: There has been a lot of coverage in the press about new visa policies for Chinese students. In fact, there have not been, actually, new policies or laws created. What there has been is increased guidance from Department of Homeland Security and from Consular Affairs in the State Department about how students should be processed, particularly if they are in sensitive fields in science and technology.

So, the regular processing of student visas is, at least as far as we know, at this point, going on unchanged. When I say unchanged, there was a change four years ago that now is causing people to feel that we may be going backwards. Up until four years ago, Chinese students came to the United States on a one-year multiple-entry visa, renewable. So, that means that when they came to the United States, they were legal for the whole period of their studies, which would be four years for undergraduate, two years for master’s. But they had a visa status that was one-year multiple-entry. They could go out during that year and come back, if they wanted to go home for the summer or whatever. But if they stayed for more than a year and then went out of the country, they had to renew the visa. If they never left the United States during their four years, no problem.

So, five years ago, a reciprocal agreement was worked out between the U.S. and China and students on each could get up to a five-year multiple-entry student visa. That made it, of course, much easier. Students could come and go, go home for the summer, come back, wouldn’t have to get a new visa. The discussion that’s now being raised, and the guidance that the visa officers are now receiving, is that for students in certain STEM fields, particularly graduate students, particularly in fields that are sensitive such as robotics, such as artificial intelligence, certain kinds of manufacturing, those students may be issued a one-year multiple-entry renewable visa again. In other words, going back to what the situation was four years ago. There’s a lot of concern on U.S. campuses that this may reduce the interest by Chinese students. I’m more optimistic, because in fact during that whole period of 20, 30 years when it was a one-year visa, numbers of Chinese students continued to rise. And going back to that policy, it seems to me it’s still not at all clear that that would deter students from applying.

The increased scrutiny of students in certain key scientific fields may delay the visa process, so that it may not happen quickly, and that may be a problem because students who are extremely bright and are in these key sensitive fields may get offers from other universities in Britain, Canada, Australia. If that visa comes through sooner, they may take that opportunity, take that offer. But people are worried about that, and that many universities and higher education associations are making it clear to Congress and to the State Department that Chinese students are an extremely valuable asset to U.S. universities. And, in fact, in the recent Congressional hearings, that was acknowledged by the chairman of the committee as well, that American higher education is a global asset and that international students on U.S. campuses are a net gain for the United States, not just financially but also academically in terms of helping American students— whose careers are going to be global— to really begin to have an understanding of Chinese and their ability to be good partners in business, partners in diplomacy, partners in social developments, partners in solving global challenges. So, the presence of Chinese students on U.S. campuses is good for China, is good for the United States, and is really good for the future American leaders and students heading into any field. 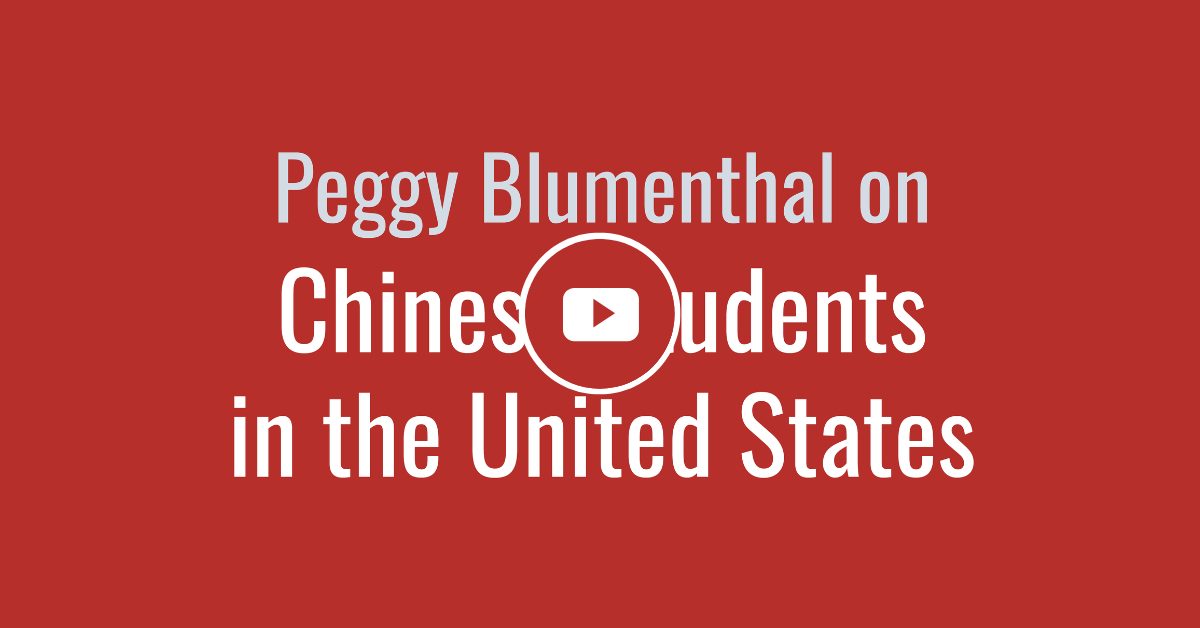 Peggy Blumenthal of the Institute for International Education explains the history of Chinese students in the United States, their impact on American institutions, and how new visa policies may affect their enrollment.