As China’s economy continues to develop, and individuals and private companies amass greater wealth, another area of growth is the philanthropic sector. Shen Danxi, a 2018 Richard Rockefeller Fellow and deputy secretary general of the Sany Foundation, talks about how her foundation represents a new generation of Chinese philanthropy, and what she sees as the key differences between American and Chinese foundations.

Shen Danxi is the deputy secretary general at the Sany Foundation, a private, corporate foundation in Beijing. Ms. Shen oversees the foundation’s grant making, program research, and global partnerships. She previously supervised the Sany Foundation’s 3ESPACE, a co-working incubator and event hub for social innovators. Prior to joining the Sany Foundation, Ms. Shen worked at the intersection of education and social innovation through partnership development and program design at the Harvard SEED for Social Innovation (now a registered fund at Shanghai Adream Foundation), a network for China’s next generation of social sector leaders. Ms. Shen holds a master’s degree in education from the Harvard Graduate School of Education, and has studied international human rights and linguistics at Peking University, Waseda University, and Beijing Foreign Studies University. Ms. Shen is also founder of Dean D’Art, a volunteer organization that has brought drama and arts education to over 300 migrant children in Beijing, and currently sits on the board of the Beijing Deqing Charitable Foundation.

Margot E. Landman: Let’s start at the beginning. How did you get into the NGO world?

Shen Danxi: I could give you a really long story but to make it short: I think I was really fortunate that I was born into this family that encouraged gratitude and social responsibility and giving back to society. So right after college…actually between college and my graduate studies at Harvard, I started a nonprofit myself that brought drama and arts-related education programs to underprivileged children in China.

Landman: So let’s fast forward to the Sany Foundation, which I think is quite unusual. Could you talk about it?

Shen: The Sany Foundation is really, I think a good representative of the emerging generation of new foundations in China nowadays. I think Sany is unique and innovative in many ways. The first one I think is that Sany started to aim to be a grant-making foundation.

This might sound usual to the U.S audience here, but in China, out of the current almost 7,000 foundations, I would say a vast majority are still operating foundations. So being a grant-maker from the very start kind of set the tone for Sany’s current work.

The second area I think that’s kind of interesting to share is that Sany doesn’t have a specific focus in terms of particular social challenge it tries to tackle but instead looks at entire sector with the mission to improve the effectiveness of all nonprofit or social impact programs across and even beyond the sector.

The third aspect I think is that we have a very vibrant and pioneering team with the same entrepreneurship spirit, I believe. So, a lot of our work really engages stakeholders not only within the nonprofit sector in the narrow sense, but look at the entire domain of society that are very keen about exerting social impact.

So it’s constantly talking with business. We talk with academia, we talk with…in policy, people working in policy in general. And so that’s exciting, and kind of responding to that is the unique way that Sany is utilizing its resources, both being a corporate foundation as well as a foundation that actually has and operates a very interesting open space in the city center of Beijing. So, with that physical space, we’re actually opening up a lot of room for exchange of ideas and innovative events and serving as a hub for all sectors to come and talk about how we can actually make more concerted efforts to promote improvements regarding social issues. So kind of being more pioneering and cross-sectoral in our thinking I think is what draws Sany different from a lot of other foundations

Landman: That raises at least two questions, as a grant-making foundation, where does the money come from?

Shen: So Sany started as a private foundation, our founder and his family owns a private company in China. So a lot of our operating budgets are direct donations from the companies as well as some of his subsidiaries and affiliates. Right now Sany doesn’t have an endowment. I think that’s also quite typical of Chinese foundations because of our financial and tax concerns.

Landman: The other question that came to mind was, you said that there’s no particular focus. You address the entire universe, which seems rather huge. How do you and your colleagues decide what to fund and what to leave to other funders?

Shen: I think not having a specific focus in terms of a vertical topic area doesn’t mean that we don’t have a focus or that we don’t try to be strategic. Instead, because our mission is really to improve the entire sector’s capacity around effectiveness and efficacy, we think really carefully about what are the critical capacity, resources, and skills needed by our nonprofit partners so that they can run their programs in a more effective way.

Landman: Let’s turn to what you’re doing here now, you’re on this wonderful fellowship. You’ve already spent some time in the U.S. You’ve obviously been in the sector in China for a number of years. What has struck you about what you’ve learned since you’ve come in this incarnation as a Richard Rockefeller fellow?

Shen: The first aspect I think is that I’m really impressed by this commitment to professionalism in U.S philanthropy. I think this is reflected in a lot of ways. For example, in almost all the foundations we are talking to, I’m impressed by incredibly intelligent and committed professionals at different levels of the foundation as well as the boards. Second, I think what I’m really inspired by is this well-fledged infrastructure for the sector. So for a nonprofit, for example, here in the States you can always turn to a professional evaluation organization or a team of researchers that can help you with expert areas, whereas in China a lot of that is still in a very nascent stage.

The second aspect I think is the sense of legacy and stewardship, particularly with private and family foundations such as RBF. I think a lot of effort, a lot of deliberation is put into thinking about how the philanthropic tradition and legacy could be carried on while coming up with new ideas and constant innovation and exploration to refresh that idea. I think that’s an amazing trend that I’m seeing. Chinese philanthropy has really been developing with the past 10 years or so, and it’s too early to talk about legacy and tradition, I believe. But having that commitment in place I think would be really helpful and relevant in the sector in China right now.

Related to that is the forward-thinking and future-oriented commitment that a lot of foundations in the U.S. have. I think a lot of foundations are thinking, one, not only about doing good things but doing them well— professionalism, as we were talking about. Second, how do we envision a world 10 years or 20 years from now and how do we move from the current world we’re in towards that shared vision we have.

So we see a lot of foundations working on putting in long term engagement and an investment in a rhetorical sense for a future that they want to see. And this is not only restricted to the U.S. as a country itself but really extended globally. So thinking about in RBF term and interconnected world that we’re all striving for. In comparison I think, because of this very early stage, the Chinese philanthropy is still in a lot of organizations are reasonably looking at current challenges that Chinese society is facing, but I believe there will be more daring and forward-looking organizations and programs that will sort of be ushered in.

Landman: It seems to me that not only are the worlds of philanthropy in the U.S and China at very different stages, but there are also very different attitudes towards nongovernmental organizations, towards foreign efforts in China when it comes to NGOs, how does that play into your thinking, if you think my observations are correct, about how you’ll be able to apply what you’ve seen here once you go back?

Shen: I think a lot of people in China don’t have a deep understanding of nonprofit and philanthropy. There are also a certain number of people who are actually doing similar social impact work that don’t call themselves nonprofits or philanthropists. So that’s very interesting, especially with younger generations. I think nowadays a lot of younger people that I work with every day are really committed and passionate about social impact. So they want to be engaged in one way or another. But because of the differences that you were talking about, both in terms of the sector as well as the entire society between China and U.S., I think a lot of Chinese people are trying to find their own position and their own way of addressing the problems that are in their community and in their surroundings. Potentially, that will mean that Chinese nonprofits and philanthropists will ultimately come up with their own voice, own philosophy, and methodology that could be distinctly different from what we’re talking about here.

I think the experience that RBF has given me is an extremely precious one because it enables me to actually gain this comparative perspective to know the possibilities on both sides and to think about how China and the U.S. could have a two-way conversation to exchange experience as well as lessons in the philanthropic sector.

Landman: Unfortunately, we’re at the end of our time, but I thank you very much for a very stimulating conversation. 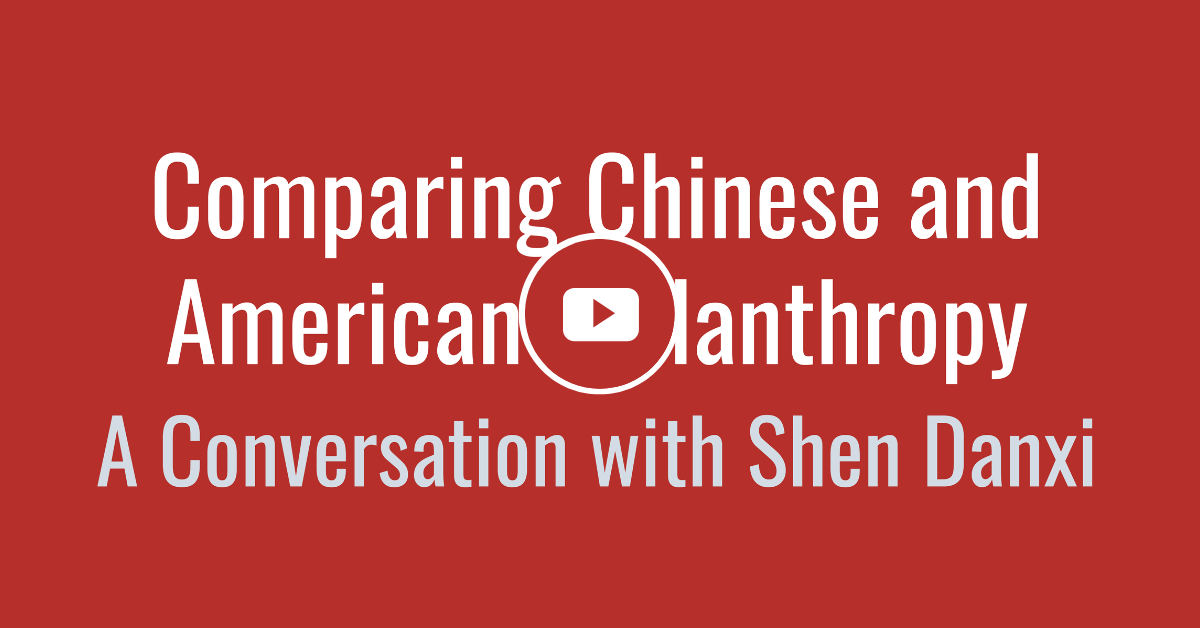 Shen Danxi talks about how her foundation represents a new generation of Chinese philanthropy, and what she sees as the key differences between American and Chinese foundations.