Margaret K. Lewis is a professor of law at Seton Hall University. Her research focuses on law in China and Taiwan with an emphasis on criminal justice. Professor Lewis has been a Fulbright senior scholar at National Taiwan University, a visiting professor at Academia Sinica, a term member of the Council on Foreign Relations, a Public Intellectuals Program Fellow with the National Committee on United States-China Relations, and a delegate to the US-Japan Foundation’s US-Japan Leadership Program.

Will the Biden administration’s Taiwan policy be a departure from the last four years?

Margaret Lewis: I don’t want or expect a departure in the Biden approach in the sense of a real shift. What I want to see is an evolution, and enhancement, and some re-evaluation on two fronts. First of all, I think that we need to have more emphasis on a multi-faceted relationship. That means that it’s not just about the military side but also the economic side needs to get more play. Under Trump, we have not seen the USTR, the U.S. Trade Representative, be as enthusiastic as I would hope about looking to embracing a more robust, economic relationship, and perhaps something even resembling a free trade agreement. I’m hopeful for that under Biden, but we will see.

I’d also like to see more cooperation on matters of health. Again, the United States I think could learn much from how Taiwan has handled the pandemic and a number of other fronts. With respect to how China plays into all of this, of course any Taiwan policy is going to have China in view. But there also needs to be attention on the U.S.-Taiwan relationship as a bilateral relationship without always having it be about China. And for that, I’m going to put in a little plug for a task force that I was on through the Center for Strategic and International Studies (CSIS) that was chaired by Bonnie Glaser, Mike Green, and Richard Bush. And there we outline a number of ways that you can look at the U.S. and Taiwan relationship without it always having to be about what is Beijing thinking right now.

But I do think we need to be aware that Xi Jinping is very different than what the leadership looked like a decade ago, and that the Biden administration is going to have to be very clear-eyed about what they’re facing in Beijing, and how that differs from when he was vice president particularly in the early years of the Obama administration.

How has Taiwan’s response to COVID-19 altered its global image?

Lewis: Taiwan’s image has been altered by the pandemic in a fantastic way, but I don’t think it’s been altered enough. I still think that many people outside of Taiwan don’t appreciate what a phenomenal job both the Taiwan government and the people here did of responding to the pandemic in its earliest period. And there’s a number of reasons for that. One is that you had a government that embraced and listened to science. In fact, the vice president at the time of the outbreak was himself an epidemiologist, and the minister of health here, Chen Shih-chung, is basically a rock star, and he deserves to be. And it was also though technology. You look at digital minister Audrey Tang who worked to have apps and other sorts of technological interventions, and that involved the government and civil society. And of course you had leadership at the top. President Tsai had the right people in the right places and listened to them, and the people listened. And so I’m grateful to be here and it’s quiet around me because my kids are at school.

How has Taiwanese sentiment about national identity been affected by their government’s success controlling COVID?

Lewis: We already saw a rise in Taiwanese identity before COVID. I was here in January for the presidential elections, which I can hardly believe was the same year because it feels so long ago. And there we had seen an increase in a lot of pride in being Taiwanese. Long-term polls that would ask people “Do you consider yourself Taiwanese, Chinese, or both?” increasingly were showing a Taiwanese-only identity that people felt that that was the way they would self-describe themselves. And so I think that that is something that predates COVID. It wasn’t because of COVID that we’ve seen a rise of Taiwanese identity. But I do think it has even enhanced it further, and that we have this sense today that there is tremendous reasons to be proud of Taiwan not only because of the pandemic response but also because we just had the TAIEX, the stock exchange here, finish at its highest level. You’ve got the economy, considering that it is a pandemic, doing extremely well. It doesn’t mean that everything is hunky-dory. Of course, there’s still a lot of domestic political turmoil. We’ve got big debates over things, for example, like pork imports from United States that contain ractopamine and very strong views about whether that should be allowed. So there are definitely internal divisions. There are polarized politics, but what you have is a strong, highly functional democracy that is dealing all of these issues and I think are transparent and, for the most part, in a healthy manner.

To what extent do historical narratives on both sides of the 1949 separation inform cross-relations today?

Lewis: Living in Taiwan, it’s easy to get seeped in some very complicated historical dates, terminology, and I think sometimes that’s hard for people who aren’t always thinking in terms of these nuances. So, for example, I think one crucial point is that people need to understand that Taiwan has never been controlled by the People’s Republic of China that was established in 1949. And it was before that that you had the Republic of China, which of course is still the official name here, the Republic of China (Taiwan). And then before that, you had a half-century of Japanese colonial rule. It’s a very complicated history, and I would just push back on narratives as people in Taiwan being pro-independence without explaining further what that means.

I think it’s important that people understand that there are people in Taiwan who are pro-Taiwan sovereignty in the sense that they are pro having this place express itself as an independent state under the name of Taiwan. That’s different than the people who I would say are much more pro-status quo, who say, “Yes, we are the Republic of China on Taiwan.” There is Taiwan somewhat in the name unofficially but still anchored in that history. And so, for example, Double Ten Day, October 10th is still celebrated here, and that celebrates the founding in the Republic of China. And that’s complicated, and it’s hard to put into a short newspaper article, but certainly living here and having lived in the People’s Republic of China, they are very different places and increasingly so. 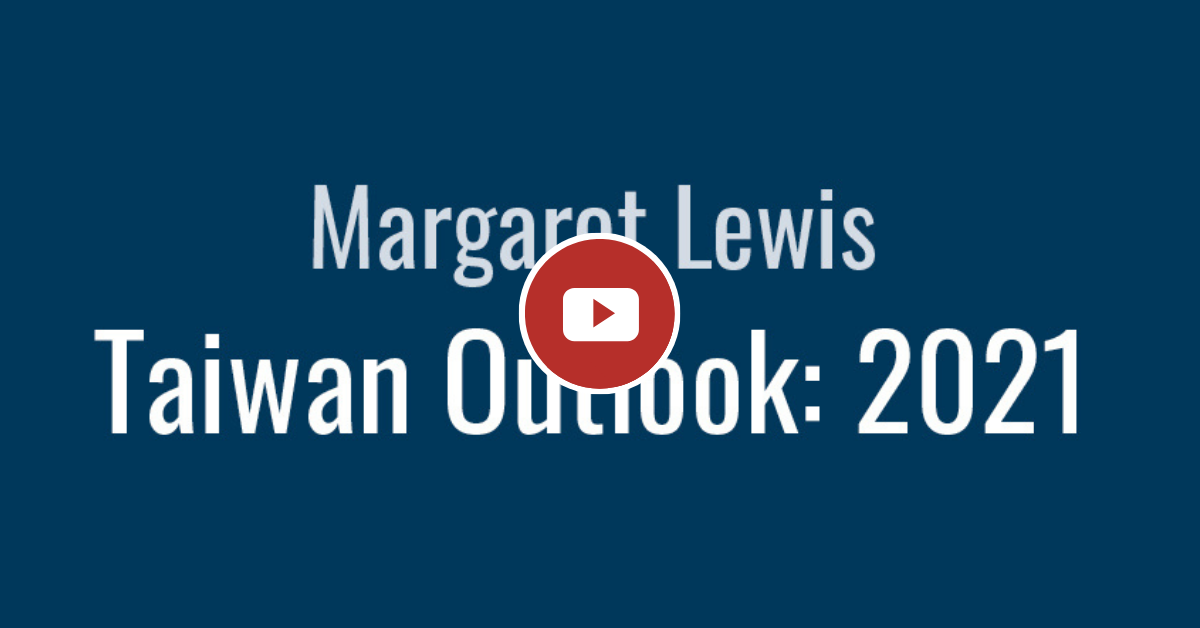 VIDEO: Margaret Lewis explores the new year's possibilities for U.S.-Taiwan relations, as well as some of the key issues facing the Taiwan government’s domestic and global standing.