When the world’s two largest economies become mired in trade conflict, there are bound to be global consequences. As analysts predict increasing risk for a global economic downturn, VanEck’s Chief Emerging Markets Economist Natalia Gurushina looks at what the trade war might mean for other countries, and explains how these consequences could have unforeseen repercussions for both the United States and China.

Natalia Gurushina is the chief emerging markets economist for VanEck’s Emerging Markets Unconstrained Fixed Income Strategy. She has been a member of the Investment Management Team since 2013. Prior to joining VanEck, Dr. Gurushina worked for Roubini Global Economics, where she was responsible for Emerging Markets Currency/Fixed Income and G10 Currency Strategies. She has also previously worked as an analyst at Pantera Capital Management, a Tiger Management spin-off, and as an EMEA economist at Deutsche Bank. Dr. Gurushina holds a Ph.D. in economic history from the University of Oxford and a B.A. in economics from Moscow State University.

How has the U.S.-China trade war affected the global economy?

Natalia Gurushina: Well, let’s start with the countries that probably stand to lose the most. First of all, these are net commodity exporters, such as Russia and Brazil, but also countries like Chile and Australia. And the reason is very simple: If you’ve got a weaker global growth, it’s likely to depress commodity prices. Now, another group of countries which also stands to lose from general weakness in import demand in both China and the United States are Sweden, Germany, and the Czech Republic. So these are the losers. One country which is likely to be one of the largest beneficiaries is Mexico. And this is because Mexico is often number two or number three largest supplier of the same goods that China exports to the United States. Another country which is in the same group, but a little bit to the less extent, is Canada. But, you know, these are the winners. And one thing that I would like to emphasize when we talk about tariffs, and winners and losers…look, if there are additional tariffs, most countries stand to lose, right? So, we can talk about winners, we can talk about out-performance, only in relative terms—I really would like to make this very clear.

What have been the implications for other countries in Asia, particularly emerging markets?

Gurushina: The impact varies depending on the country. And if you look, for example, at the items that were already affected by the 10% and the 25% tariffs, imports of these items from China to the United States declined by about a quarter in the first four months of the year. But what is interesting is that the bulk of this decline was offset by stronger imports from countries like India, Vietnam, South Korea, and Taiwan. So the shift is definitely happening.

Now, if you look at the largest beneficiaries, these are, first and foremost, the countries with pre-existing alternative suppliers. But, you know, what is interesting is that one particular country really stands out. It’s Vietnam. And Vietnam is truly emerging as a new manufacturing hub, not just in Asia, but in the globe.

Could this shift to other markets influence China’s current economic policies?

Gurushina: So the potential is clearly there, and I think this shift in supply chains is likely to be much more pronounced if additional tariffs is announced. Now, if you add to this, a better business environment in countries like South Korea and Taiwan, and the fact that China’s labor cost increased quite a bit over the past two years, I would say that it is definitely food for thought for Chinese authorities as regards, you know, opening the economy and, you know, perhaps pursuing a little bit more of reforms. It actually might help to explain why there was a little bit more progress after the latest trade war bout.

What do you believe is at the heart of this trade dispute? Is there an underlying geopolitical issue, or is it purely economic?

Gurushina: Well, the geopolitical element is definitely there. We are talking about strategic rivalries; we are talking about China as a rising power trying to figure out what its place is in the world, what kind of world power it’s gonna be, what is in its interests and what is not, and how these might affect the interests of other countries. An important element of this is technological competition; after all, we’re living in the era of the Fourth Industrial Revolution. And, if you think about China’s establishing strong economic links with other parts of the world, this is almost like a natural seeding ground for China’s indigenous technologies, perhaps not immediately but definitely in the future. And, you know, one question you want to ask yourself is whether at some point these technologies might decouple from U.S.-based systems.

Now, as regards a purely economic agenda, one interesting aspect to consider is whether the competition between China and the United States is a test of which of these two systems provides a more efficient allocation of capital. In the United States we get used to the fact that it’s freely functioning financial markets which is the main medium. In China, the central planning aspect is much more prevalent. And in a sense, for example, if you look at the Belt and Road Initiative, in a sense it’s a live test of whether projects that were financed by China using these different sets of principles and different sets of rules will turn out to be viable in the longer term.

The trade war could end as soon as a deal is reached. But what could the long-term effects of this dispute be?

Gurushina: Well, if you want to talk about, let’s say, longer-term economic implications, two things, I think, are worth mentioning. One is the internalization of the Chinese currency. Chinese authorities are very actively promoting the use of the Chinese renminbi in international transactions and also promoting its status as a world reserve currency.

Another aspect is, if you look at the competition between the United States and China, the question is how this will affect China’s ability to deal with its internal balances because, well, China became rich, but at a cost. And one of the biggest costs is the level of debt. According to various estimates, debt-to-GDP ratio in China is between 250% to 290%. So if we think that, after whatever trade deal is signed, there will be additional tensions and these will affect China’s growth—well, this will undermine prior assumptions that China might grow its way out of debt. That might no longer be the case. In which case, China’s vulnerability to hard lending will increase, and a related question you want to ask yourself in terms of long-term consequences is: What would be the implications for the legitimacy of the governing structures?

Gurushina: We look at many of these topics, and specifically structural changes in the Chinese economy, in our blog called “How is China doing?.” So if you have a couple of minutes, feel free to look at it in our website. 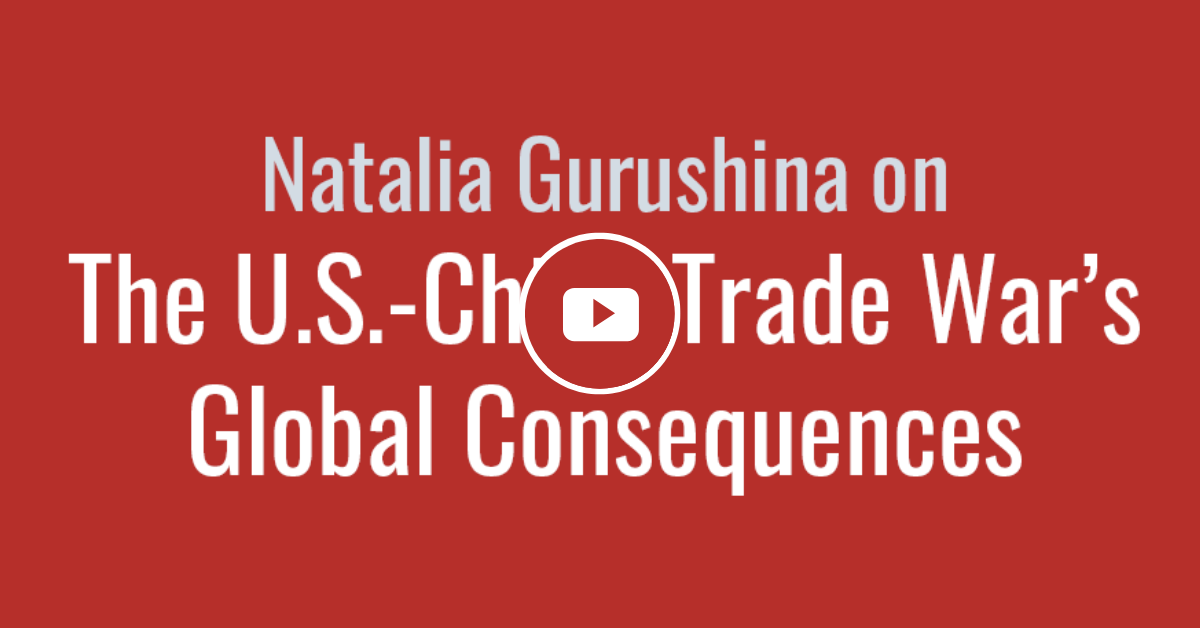 VanEck’s Chief Emerging Markets Economist Natalia Gurushina looks at what the U.S.-China trade war might mean for other countries.