In his first speech to an American audience since the Biden administration took office, Politburo Member Yang Jiechi, director of the Office of the Central Committee for Foreign Affairs of the Politburo of the 19th CPC Central Committee, spoke on the state of U.S.-China relations and prospects for the future. The address was in Chinese with simultaneous interpretation. Director Yang was introduced by the National Committee’s new board chair, Secretary Jacob Lew.

The National Committee hosted a virtual address by Director Yang Jiechi on February 1, 2021.

Yang Jiechi is a member of the Politburo of the CPC Central Committee. He is also director of the Office of the Central Committee for Foreign Affairs. His long career at the Ministry of Foreign Affairs began in 1975 in the Department of Translation and Interpretation. He went to the Chinese Embassy in Washington, D.C., for the first time in 1983, serving successively as second secretary, first secretary, and counselor until his return to China in 1987 as counselor and division director in the Translation and Interpretation Department. In 1990, he became deputy director general of the Department of North American and Oceanic Affairs, a position he held until 1993 when he returned to Washington to serve for the next two years as deputy chief of mission at the PRC Embassy. In 1995 he was promoted to assistant foreign minister and then in 1998 to vice foreign minister. In 2001, he became ambassador of the People’s Republic of China to the United States, a position he held for four years. He was appointed vice foreign minister in 2005 and elevated to foreign minister in 2007 – a position he held until becoming state councilor in 2013.  He assumed his current duties in 2017. Born in Shanghai, Dr. Yang received his Ph.D. in history from Nanjing University. He also studied at Bath University (England) and the London School of Economics.

National Committee board chair Jacob J. Lew is a managing partner at Lindsay Goldberg and a visiting professor at Columbia University’s School of International and Public Affairs. When Secretary Lew served as the 76th Secretary of the Treasury (2013 to 2017), he was co-head of the American delegation to the U.S.-China Strategic and Economic Dialogue. He previously served as White House chief of staff, director of the Office of Management and Budget, and Deputy Secretary of State for Management and Resources. Secretary Lew received his bachelor’s degree from Harvard University and his law degree from Georgetown University. 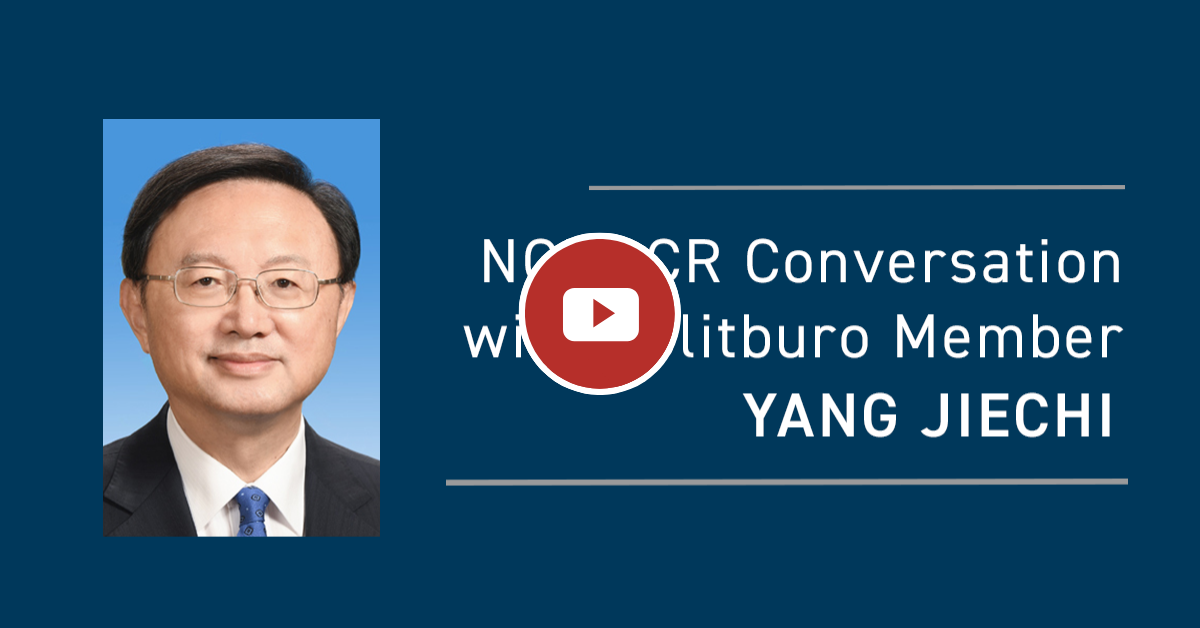 VIDEO: In his first speech to an American audience since the Biden administration took office, Politburo Member Yang Jiechi speaks on the state of U.S.-China relations and prospects for the future.