In the waning days of the Qing Dynasty, China, beset by political dysfunction and domestic tumult, struggled to defend against the imperialist intentions of Western powers. Following years of tensions, war between China and Great Britain eventually broke out, the result of which would propel China into the chaos of the so-called “Century of Humiliation.”

In a new book, Imperial Twilight: The Opium War and the End of China’s Last Golden Age, author Stephen R. Platt traces the complex origins of the conflict, and reveals how a once profitable and peaceful relationship descended into war. Dr. Platt explores the state of Sino-Western relations through the accounts of the various traders, missionaries, and others who sought to mediate between China and the West.

Dr. Platt discussed his book, and the lessons the Opium War can offer as tensions over trade once again rise to the forefront of Sino-Western relations, with the National Committee on July 12, 2018.

Stephen R. Platt is a professor of history at the University of Massachusetts-Amherst and holds a Ph.D. from Yale University, where his dissertation won the Theron Rockwell Field Prize. He was a member of the 2008-2010 cohort of the National Committee’s Public Intellectuals Program. His new book, Imperial Twilight (Knopf, 2018), is a history of the origins of the Opium War. His previous book, a history of the Taiping Rebellion in global context, Autumn in the Heavenly Kingdom (Knopf 2012), was a Washington Post notable book and won the Cundill History Prize. Dr. Platt’s first book was Provincial Patriots: The Hunanese and Modern China (Harvard University Press, 2007). His writing has appeared in The New York Times, The Wall Street Journal, The Atlantic online, and ChinaFile, among other places. 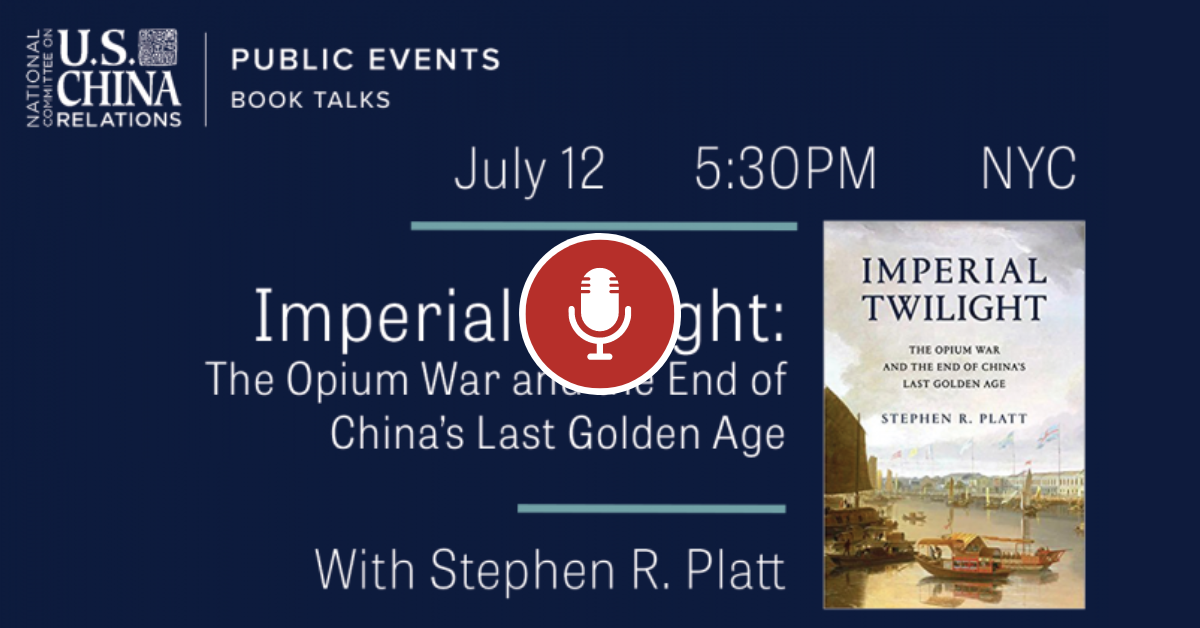 PODCAST: Stephen R. Platt discusses his new book, offering a unique perspective on one of the most consequential events in Chinese history.

VIDEO: Stephen R. Platt discusses his new book, offering a unique perspective on one of the most consequential events in Chinese history.