The role government should play in the free market has always been a contentious issue, even more so when international trade jeopardizes national security. As the standoff between the United States and China continues, disagreements over what constitutes mutually acceptable trade practices are becoming more entrenched, with both governments accusing the other of interference and overreach.

Amy P. Celico is a principal of Albright Stonebridge Group, a global strategic advisory and commercial diplomacy firm, and leads the firm’s China practice in Washington, D.C. She has more than 20 years of experience working on China issues. Previously, Ms. Celico served as senior director for China affairs at the Office of the U.S. Trade Representative. She also worked at the U.S. Departments of Commerce and State in Beijing and Shanghai, as well as the International Trade Administration and the Bureau of Intelligence and Research in Washington, D.C. Ms. Celico serves on the Board of Directors of the National Committee on U.S.-China Relations.

What has changed in the last few years to upend the stability in the U.S.-China trade relationship?

Amy P. Celico: It’s been interesting as somebody who’s been involved with watching China, working on China for more than 30 years now, that as we just passed the 40th anniversary of normalization of U.S.-China ties, unfortunately, we’ve also reached probably the lowest point in U.S.-China relations in about 30 years. And so this trend that you asked about is here to stay, I think. The era of constructive engagement guiding our two countries together is likely to be permanently replaced by an era of competition. And whether we call it smart competition or strategic competition, I do think that China has been rising in a more assertive way.

And in many ways, governments around the world, including the U.S. government, are reacting to that. And whether you agree or disagree with the policies of the Trump administration being tougher with China on economic issues and some security issues, I do believe that this trend is here to stay, that the United States is going to look at China as a competitor, and judge whether and how China’s participation in the international system is supportive and additive, or a potential threat to that system that, of course, the United States played such a significant role in building.

What are the main sources of concern in the national security arena affecting economic policy?

Celico: I think today, we have been seeing this bleeding of national security issues into economic policy making. And that can be problematic for a whole host of reasons. But your question is why? Why are we still seeing that? Well, I think that as the United States and China look at one another with less trust, more suspicion, and from the United States’ side, some concern over the direction of China’s rise, it’s natural that the United States is thinking about national security considerations in every aspect of U.S.-China relations, including in economic policy making. And so that has led the U.S. government to think about whether there should be enhanced restrictions on Chinese investment into the United States done, U.S. legislation guiding our CFIUS review process has already been strengthened, and so we are looking more carefully at minority stake investments from Chinese entities into the United States, as well as complete acquisitions and other M&A activity. And that trend is likely to continue.

There’s also been talk on Capitol Hill and in the administration about strengthening export controls, and so strengthening for national security considerations, the review of exports of U.S. products to China. In the past, it’s been strictly defined by dual-use activity, so any kind of items that could be used by military as well as civilians in the China market. But now, the Commerce Department is, right now, looking at whether and how we should expand the kind of technology that faces export control restrictions, whether emerging and foundational technologies should also be wrapped up in these kinds of restrictions. And those definitions haven’t been set yet. What is an emerging technology? What is a foundational technology? And should it be restricted in it sale to China and other countries where we see national security concerns?

Which industries do you think will be most affected by this trend?

Celico: When we talk about investment restrictions, and of course, investment restrictions based on national security considerations, very much the question you asked, also information. So we’re looking at Ant Financial, a private Chinese company, tried to acquire MoneyGram, the U.S. company. And that was deemed inappropriate because it would have shared financial information of users with a Chinese company. Now, Ant Financial, of course, everyone knows is part of Alibaba Group. And nobody is saying that that is a government-owned enterprise. But of course, the concerns are the Chinese government would be able to get somehow to get access to that financial information.

And so I do think whether it’s in FinTech broadly, or just even more broadly than that, talking about user information, personal information, whether it’s in healthcare, the dating app, Grindr, is going to have to unwind having been sold to a Chinese entity, because of the sensitivity of user data now, being in the hands of a Chinese parent. I think we’re going to see that kind of issue in the future, and even successful acquisitions by Chinese entities or minority stake investments in the United States. I think in the future, if there is the involvement of user information of data that is tied to American citizens, American companies will work with prospective Chinese investors to make sure that data can be securely protected, so that it can be approved going through the CFIUS process. So you’re absolutely right, we’re not just talking about technology companies being faced with greater national security scrutiny if there’s going to be Chinese investment or sales from the United States to China, I think we’re also talking about data that involves American citizens.

How do we keep security and economics separate, when both have huge spheres of influence?

Celico: That will be challenging. I think, in the United States, where we have a very transparent legal system and judicial process, there are laws, there are rules, there are public comment periods, that allow us to have a say in how the United States dictates these kinds of policies. So like I said, investment reviews of strengthened CFIUS process did go through a legislative process. So there was ample opportunity for U.S. citizens, for industry to comment and speak with members of Congress about reforming that law. The same thing is true with the export controls that I’m talking about. We are, right now, waiting for the Commerce Department to release how it is defining ‘emerging and foundational technologies,’ and whether they want to put additional national security restrictions on the sale of those kinds of technologies to China and other countries.

And so we will have an opportunity to give comments on rules that are drafted. I think part of the challenge that we face in the future in really restricting national security issues from bleeding into economic policy making is in China. There’s already been that bleeding happening as well. Now, I’m not saying that we should emulate China and do whatever it does, this is not a case where reciprocity is a good thing. I think there should be stronger, better defined restrictions between economic and national security policies made in China and in the United States. This is something where the WTO could play a role in helping to define those rules for all of us. But the United States and China have to be willing to have that conversation in Geneva at the WTO with other WTO members. And that raises a whole other host of challenges.

And so in the short term, and likely in the medium term, I do think national security will be part of considerations for trade policy for commercial policies, as well as for other political policies between the United States and China. And I think it’s the role of the National Committee, of many of us in the business community who want to promote exchange of ideas, of money, of goods, of services, between the United States and China, to be rational voices in saying, “Well, yes, national security is incredibly important to the United States, the most important thing for us to protect. Let’s not have such an expansive definition that we’re restricting our ability to work with the second largest economy in the world.” 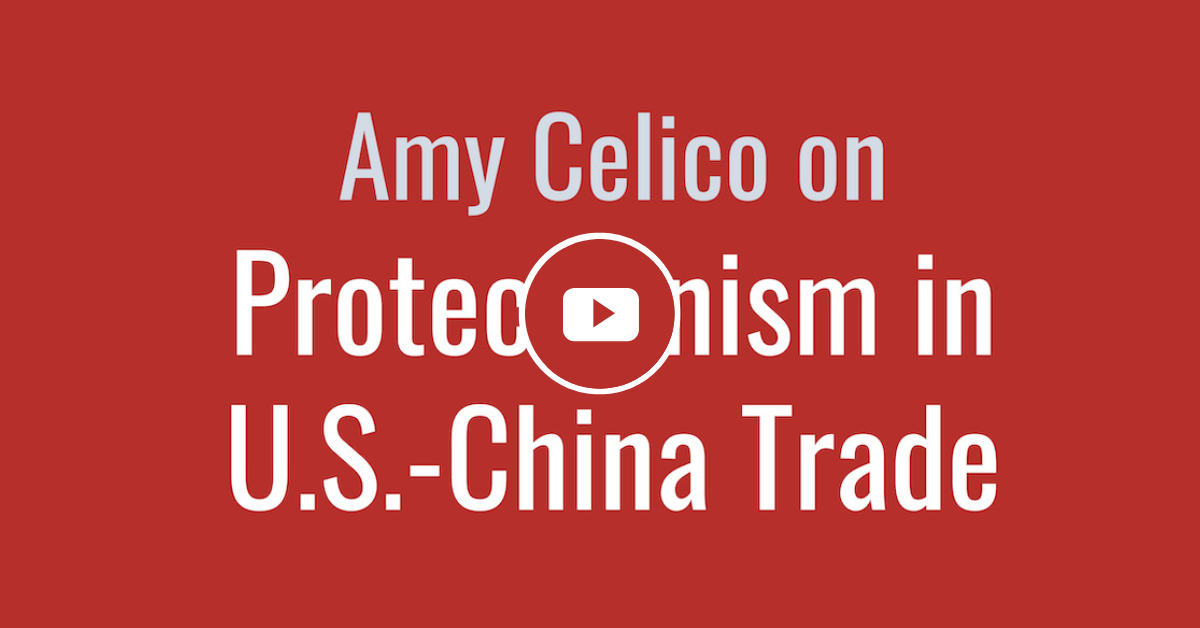