In China, industry and political leaders are capitalizing on sci-fi’s unique ability to inspire the public and project a vision of the future that features China as a global innovation leader.

Experts Aynne Kokas, Jing Tsu, and Yilin Wang explore how this genre can both reflect China’s present and shape its future.

Aynne Kokas is an associate professor of media studies at the University of Virginia and a senior faculty fellow at the Miller Center for Public Affairs. Her multiple-award-winning first book, Hollywood Made in China (University of California Press, 2017) argues that Chinese investment and regulations have transformed the U.S. commercial media industry. Her next book project Data Trafficking: The United States, China, and the Global Battle for Data Security will examine the policy implications of the transfer of consumer data between the United States and China. Dr. Kokas is a term member of the Council on Foreign Relations and a fellow of the National Committee’s Public Intellectuals Program. Read Full Bio.

Jing Tsu: Science fiction in China, at least in the 20th century, is really a foreign import. China has its own traditional fantasy fiction. But the 20th century really was a different period where Jules Verne and others had a greater influence on Chinese writers. However, that does not actually have a direct impact in terms of lineage on the present resurgence of science fiction in China because this group of writers that we’re looking at now actually grew up on American science fiction, not quite counting Liu Cixin, Three-Body Problem, because he was more of the ’70s… he’s from an earlier generation who grew up during the Cultural Revolution, but the way that science fiction has developed in China, since his great success with his trilogy, is really the younger writers who are the one-child generation, they grew up reading American science fiction on the Golden Age, and so on and so forth.

How has sci-fi developed as a genre in China? What might this say about China’s economic, political, and/or technological goals?

Now, in terms of what it says about China now, and why is science fiction so popular, it really is a happy confluence, a happy marriage, chance marriage, but not always. That’s not always been the case. Science fiction actually went through several waves, several points, ups and downs in the course of the 20th century. It was banned on several occasions in the late ’70s and the early ’80s. It looked like it was having new life breathed into it. But then in the early 1980s, it was banned, again under the rubric of spiritual pollution from the West. So the confluence of science fiction and China’s state directive has not always been there, and the fact that it is there now really is more of a happy coincidence, than a kind of testimony to its staying power or its status throughout the 20th century. So it’s really kind of a renegade genre that now just happens to have a spotlight because of China’s drive for science and technology, which has been going on since the ’50s but now taken to new heights.

That said, there are not that many science fiction writers. There’s maybe a handful that have been published. So the most important thing for sci-fi writers is still having the room to create, and to think freely, without necessarily being comfortable…holding too closely to the state vision for science technology. But so far, so good. There seems to be a mutually beneficial relationship.

One change in recent times, this last August, the Chinese government put out ten guidelines for the science fiction industry. And this was quite impactful because obviously, if anything else, it confirms the fact that Chinese science fiction has caught the state’s attention. But what they’re interested in fostering is not just fiction, per se, but the entire genre as an industry, replete with movie scripts, different forms of IP, it could be gaming, but a big focus in these two…in these 10 guidelines is actually the film industry. So this entails a completely other chain of machinery that is brought into view, including training writers, screenplays, have the whole mechanism of converting fiction into film, so on and so forth. We’re actually at a very exciting period where we’re not sure what’s going to happen to Chinese science fiction in the next several years, hopefully where writers will just simply have the time they need to write and to create.

To what extent has Sci-Fi succeeded as a cultural export for China? What does this say about the potential for China’s soft power?

Aynne Kokas: Sci-Fi is a really interesting case within the Chinese film industry. It’s been very successful domestically. So, the Chinese market has really excelled, and, generated a lot of income through Sci-Fi films. For example, a recent film, “The Wandering Earth,” took in over $600 million in the box office, domestically.

Now, the interesting thing is, while there has been some interest in distributing the film globally, as well as other Chinese films, there is a hesitancy, about, wide global uptake of Chinese Sci-Fi films because a lot of them have very nationalistic themes.

Now, there is another side of this, which is that the increased robustness of the Chinese domestic film market through things, like the Chinese Sci-Fi landscape, means that the Chinese film market has more power than Hollywood, relative to Hollywood than previous years.

So, there’s less dependence on Hollywood studios for being able to supply key tech roles, for example. Because, there’s a real, there’s an ample supply of that now within the Chinese film industry. So, there is a power, a power shift that’s occurring as a result of the Chinese Sci-Fi industry.

To what extent do you think Chinese Sci-Fi and speculative fiction can be read as reflective of Chinese society and everyday people?

Yilin Wang: When we look at the field of Chinese Sci-Fi and speculative fiction and how it connects to Chinese culture, society, everyday people, I think we have to think about, a country’s literature is not in monolith. So just like writers of any other cultural background, a Chinese writer of Sci-Fi or speculative fiction is not going to think of themselves as speaking for the country or culture. They often just see themselves as a writer of Sci-Fi or speculative fiction, just like writers from any other culture. Chinese Sci-Fi and speculative fiction more broadly, are also very broad categories that span and include many sub genres. For example, we have well known and popular hard science fiction series. We have martial arts section, we have folklore, we have various fantastical and speculative web novels, and so we can’t really group them all as like one singular type of fiction.

While some works may touch on social critique, or engage with visions of the future, or shed light on China’s rapid technological growth and development, I think most authors are also just trying to tell a good story. We have to think about their individual interests and intentions, and look at this question, I think, in terms of individual authors, and not erase those differences and look at individual works, and what do they perhaps say about Chinese society and everyday people.

For me, as Chinese-Canadian writer and translator, I think the power of reading speculative fiction and translation for English readers, is it can expose readers to fantastical worlds, imaginative situations, future possibilities that exist beyond the world we live in. As Chinese speculative fiction becomes better known in English and more widely translated, there’s an opportunity for it to be in conversation with, and expand non-Chinese reader’s understanding of not just Chinese culture or society, but also just people’s understanding of the genres themselves, and to kind of shed light on what science fiction, and fantasy fiction, and different types of speculative fiction, what can they be, and expand the genre right thing that’s available in English, and offer different perspectives on genre conventions and storytelling tropes. 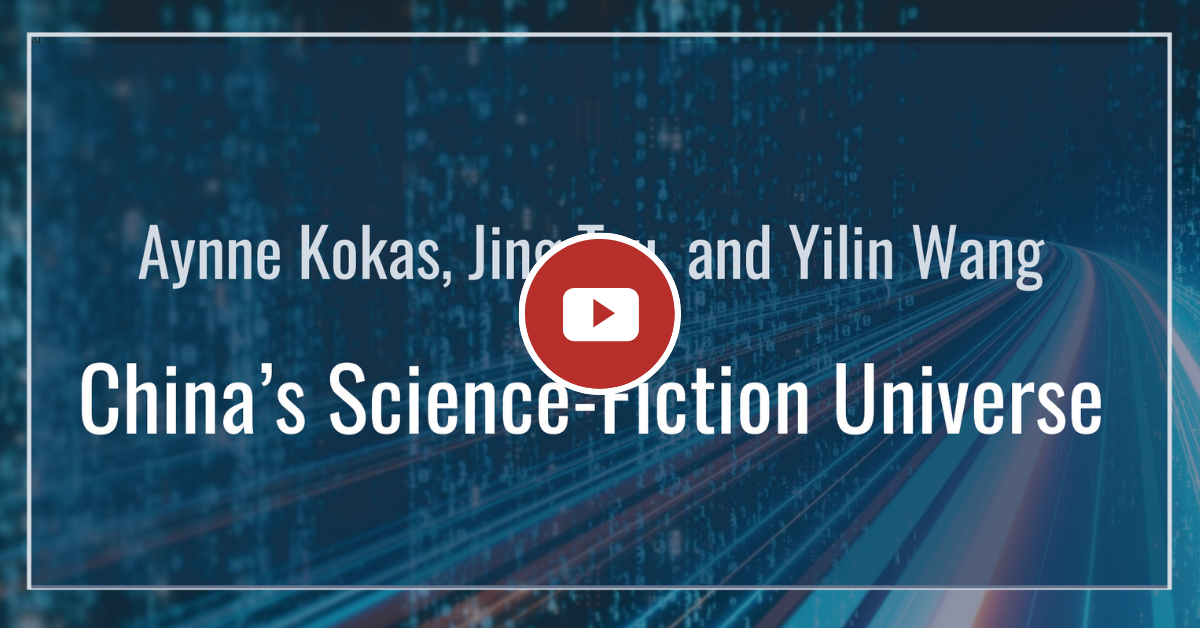 Aynne Kokas, Jing Tsu, and Yilin Wang explore how the genre of science-fiction can both reflect China’s present and shape its future.