Dr. Marc Lanteigne is an associate professor of political science at UiT: The Arctic University of Norway, Tromsø. His research interests include China and East Asia foreign policy, China’s engagement and cooperation with regional and international organizations, Sino-European and Sino-Polar relations, and trade politics and China’s commercial diplomacy. He is the author of China and International Institutions: Alternate Paths to Global Power (2005) and Chinese Foreign Policy: An Introduction (2009, 2013, 2015, 2019), and the co-editor of The Chinese Party-State in the 21st Century: Adaptation and the Reinvention of Legitimacy (2008), China’s Evolving Approach to Peacekeeping (2012), China and Nordic Diplomacy (2017) and the Routledge Handbook on Arctic Security (2020). In addition, he has written chapters and articles on subjects which include China’s Asian diplomacy, polar politics, and Asian strategic policies, including maritime security and responses to economic security challenges.

How have China’s interest and activities in the Arctic region evolved since the turn of the century and why?

Lanteigne: They have expanded a lot. When China began to rework its Arctic policy over the past 20 years, the focus was originally on scientific diplomacy to better understand the Arctic and better understand how changes in the Arctic were affecting China in regard to climate change and other kinds of change conditions within the country. In recent decades, we have seen a very dramatic melting of the Arctic ice cap. We have seen ice, especially in the summer months in the Arctic, become less and less pronounced. It is now much more possible to access more open water within the summer each year. And we are also starting to see the ability of resources that would normally be completely inaccessible – such as oil and gas in Siberia, or metals and minerals in Greenland. All of a sudden it is possible to develop them for global markets. So, China is very interested in all of the opportunities that are ebing created by the fact that more and more of the Arctic is becoming available due to climate change. But since I’d say over the past five years, there’s been a much more pronounced focus on not only the economic opportunities that are being presented in the Arctic because of climate change, because of access to resources and shipping potential, but China’s also started to become much more interested in governance. The idea that this this a region which is getting a lot of international attention, and China would very much like to participate in future areas of lawmaking and Arctic politics. So, we are definitely seeing an expansion and a greater variety of China’s interests in the region. And I would say that the Arctic in Chinese foreign policy is not paramount, but it’s certainly growing in status.

Lanteigne: The biggest similarity between China and several other Arctic and non-Arctic countries is the push for scientific diplomacy, the push for greater cooperation in all different kinds of research related to what is happening in the region. So, we’re dealing with climate change, we’re dealing with changes in local biospheres, we’re dealing with the problems of pollution, which is starting to become more and more apparent in the far north. So, China has been very open to the opportunities of cooperating with Arctic and non-Arctic states to get more information about what’s happening. I’d say that China’s very distinct interest in the region as opposed to other countries that are starting to develop Arctic policies – because China is a great power, and because China has started to develop cross-regional diplomacy as a focus for quite some time, China has understood that in order to be a great power, and specifically a responsible great power, it needs to develop a much stronger regional presence in many parts of the world. And that has included the Arctic.

Now, on the other hand, China has also really tried to press the idea that the Arctic certainly is under the jurisdiction of Arctic states and is subject to international law, including the Law of the Sea. But China’s also kind of pushing the idea that there are some aspects of Arctic governance that really should be open to international participation. China’s not alone in that. We’ve seen Arctic policy papers from Japan, Germany, the UK, and France that have all suggested that we should have a greater say of what’s happening because we’ve seen more and more evidence that what is happening in the region is affecting us. But because China is a great power and because China is such a major international player, that’s the country that’s getting most of the attention.

I think China has been an observer state for the Arctic Council since 2013?

Lanteigne: Yes. China, along with other Asian governments, including Japan, Korea, India, and Singapore, not your traditional Arctic state, all became formal observers in the Arctic Council as of 2013. If you’re an observer – and for the Arctic Council, to be a member, you must have Arctic geography. If you’re an observer, you’re not able to vote. And you are expected to participate in Arctic dialogues primarily through the organization’s working groups.

Has China contravened any international laws or conventions in the Arctic thus far?

Lanteigne: The short answer to the first question would be no, that China is well aware of the fact that it is under a microscope in the Arctic and its Arctic policy. And if you look at China’s white paper on the Arctic, which was released by Beijing in early 2018, there was a great deal of focus on the idea that yes, the Arctic state should have jurisdiction over their Arctic territories, but non-Arctic states should have the right to participate in scientific and economic activities. Beijing has also made it very clear that it recognizes the Law of the Sea as applying to the Arctic Ocean, like everywhere else. It has also been very active in new agreements relating to Arctic governance, including the Polar Code on civilian shipping and the recent fishing ban in the Central Arctic. So, China has been very careful not to give the impression that it’s trying to be a revisionist power that is trying to assail international law in the Arctic.

Is it usually acting unilaterally when it is getting involved in the Arctic region?

Lanteigne: In regard to cooperation, far and away, the most important partner for China in the Arctic has been Russia. Russia is very determined to develop its Arctic lands. So, I’m talking about Siberia and the Russian Far East, for economic potential that includes oil, gas, shipping, and related infrastructure. Because of the political situation post-2014, so Crimea and Donbass, it’s been very difficult for Russia to develop partners in Western Europe and other parts of the West. China has been the major development partner for Russia. The two countries very much need each other for their respective Arctic policies. But China has also been interested in developing partnerships with other Arctic states. Here in Norway, a free trade agreement is being negotiated. China has one with Iceland. China’s very interested in mining in Greenland and potentially shipping throughout much of the Arctic Ocean. So, China is very interested in partnership building.

Have the United States and China interacted in this region before? And is there any potential for future collaboration?

Lanteigne: Most of the major collaboration between China and the United States in the Arctic has been through organizations such as the Arctic Council. The United States is a member and China is an observer. And there has been quite a bit of discussion about cooperation and coordination on various areas of scientific interest. However, over the past year, the United States has begun to re-work its Arctic policy, saying that the big problem is great power rivalry, specifically pointing toward Russia and China as adversaries. This unfortunately has sent a very costly signal to Beijing that cooperation between China and the United States will be more difficult. And it may complicate a lot of potential joint research at a time when the more the merrier in terms of understanding what’s really happening in this part of the world. 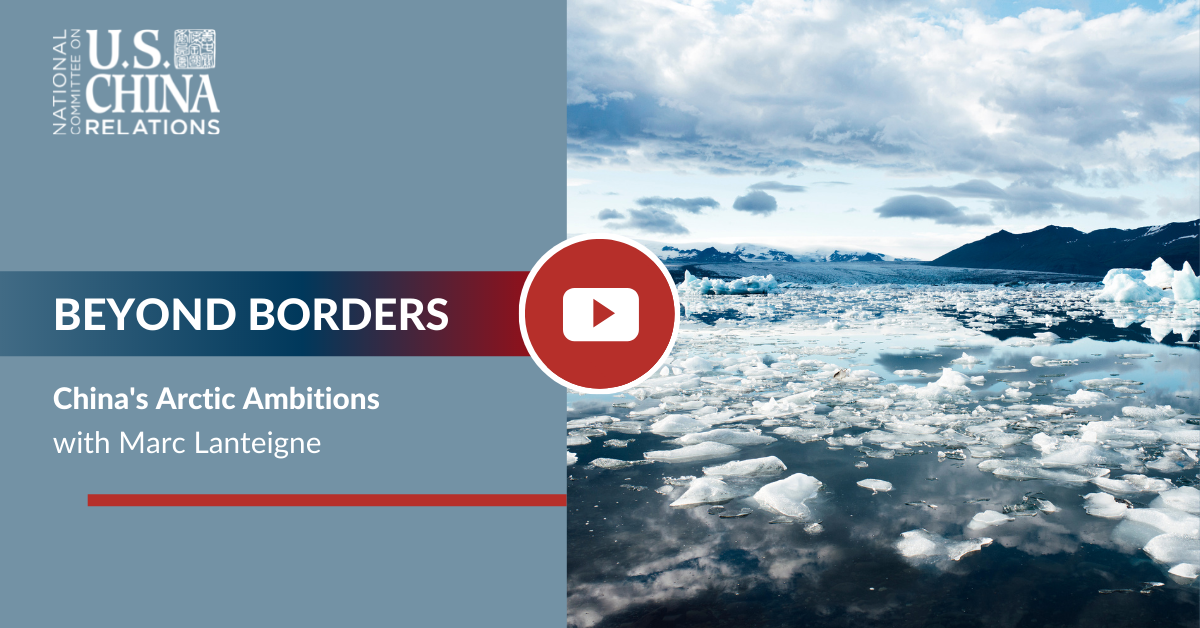