The Justice Department’s China Initiative against economic espionage and intellectual property theft has made Chinese students in the United States a focus of increasing scrutiny, while Congress has initiated legislation aiming to restrict this broad group’s ability to work and study in the United States.

In light of the Justice Department’s more than 3,000 active investigations of China-affiliated researchers and students in the United States, Queens College President Frank H. Wu discusses the initiative, the resulting increase in scrutiny of Chinese nationals and Chinese-American students, and the potential threat to American competitiveness and economic vitality that these developments present.

Frank H. Wu is the president of Queens College, former president of the Committee of 100, and a former litigator and professor of law. He is a frequent public speaker and the author of, Yellow: Race in America Beyond Black and White. Wu earned his bachelor’s degree from Johns Hopkins University in 1988 and his J.D. degree from the University of Michigan Law School in 1991. In 2006, he completed the Management Development Program at Harvard University Graduate School of Education.

Is denying visas to Chinese students and scientists an effective strategy to combat IP theft and state espionage?

Frank H. Wu: There’s a joke going around among Chinese on social media. The joke is the United States government is worried that if Chinese come they’ll steal intellectual property. If the Chinese don’t come there won’t be any intellectual property being created here worth stealing. That’s the joke.

If we believe that every Chinese student or that almost all Chinese students in STEM fields, in fact, are spies or lawbreakers, well, then of course we should keep them all out. But it’s highly unlikely, just on the face of it, that they are all or almost all spies.

All these people now, if they have a grant, if they work in a scientific field, they’re fearful because they are leading government officials who openly declare that we have to be fearful, suspicious of every single person of Chinese descent who wants to come to the United States to study science, that we should exclude all of them.

All of this harms the American national interest totally separate from how it affects Chinese-Americans. The United States, it’s great strength, especially with rising ethnic nationalism globally, has been its openness, that it has welcomed people. Now, so many talented people of Chinese descent are thinking, “Why would I go there? I’ll just stay where I am in Shenzhen, or I’ll consider Canada or Europe.” That does not help America.

How can the United States counter the problems of intellectual property theft and espionage in a way that avoids racial profiling and a potential U.S. brain drain?

Wu: As an American, I am all for appropriate law enforcement. It’s as important to me as to any other American that our laws be respected, that people who come here understand that these are the rules. And it is possible to have effective law enforcement without engaging in racial profiling.

It’s possible to have more compliance training, a reduction of expressly racial rhetoric, and investigations that are based on conduct and other flags that would suggest that someone is violating American laws without using race and ethnicity as the factor that determines whether to look at someone.

Do you see any way that the United States might be able to resolve these issues with China directly, rather than targeting individuals and keeping out broad groups of individuals?

Wu: We live in a moment that’s fraught. It feels as if there’s a reckoning upon us. There’s a global pandemic. There are civil rights protests all throughout the nation, long overdue, joined by so many. Regrettably, on both sides of the Pacific, there has been an increase in anger and it just keeps going up and up and up. The irony is historically among the best bridge builders are those individuals who are bicultural. You know, I am an agent of foreign influence, but in the other direction, I have a couple of times gone to China and taught American law, ethics in English.

I’ve tried to promote American values in China. And that idea was once at the heart of engagement. Well, that’s what the national committee is all about, the idea that if we train people who are bilingual, bicultural, who are as comfortable in Beijing as Washington, New York city as Shanghai, that through these relationships, through this understanding through engagement, by coming into contact with one another, we will make things better, not worse.

There is now an express rejection of engagement and the rapid promotion of disengagement, which probably is not going to serve humanity. When you think about what’s on everyone’s minds, the pandemic, it’s not as if there’s going to be one cure for Chinese people and another cure for American people. It’s likely that there will be multiple cures that could be developed in a cooperative fashion, but even on issues such as fighting the pandemic, there’s a ratcheting upward of global tension, especially between the United States and China.

Wu: With every policy at every turn, there’s always the option, increase the anger, the rhetoric that dares the other side to match the same intensity or try to decrease all of those negative feelings and sit down and say, “Look, we can, we should, and we must work this out.” 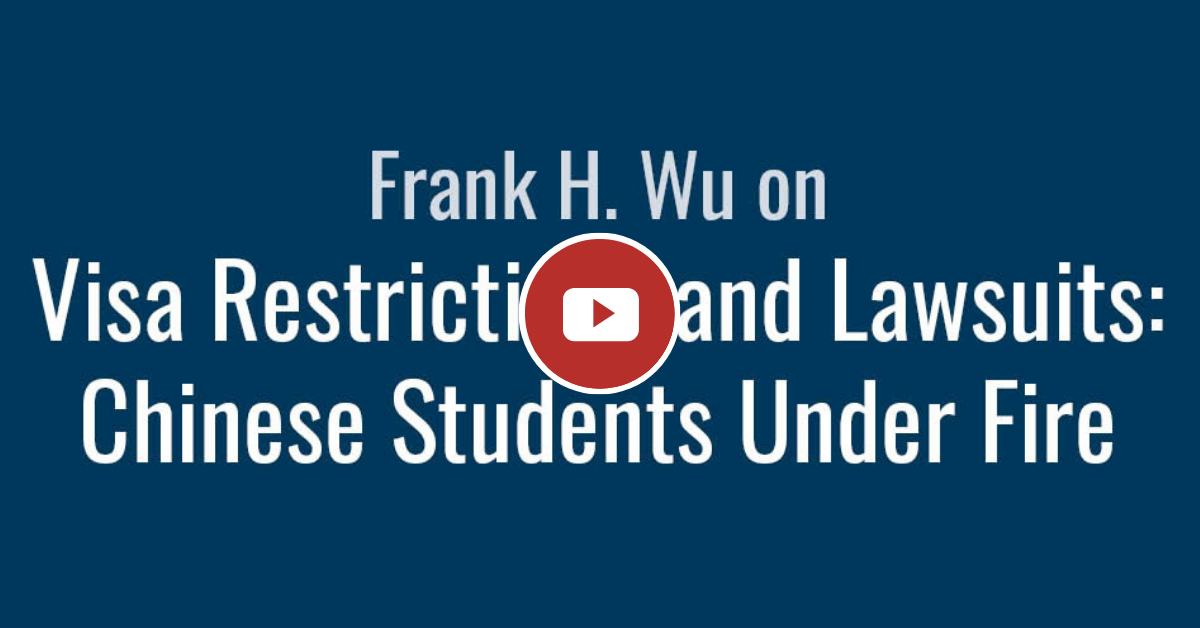 VIDEO: Frank H. Wu discusses the China Initiative, the resulting increase in scrutiny, and the potential threat to American competitiveness.