In the decades following World War II, global geopolitics were dominated by two superpowers: the United States and the U.S.S.R. The Cold War era was defined by estrangement and the threat posed by a nuclear arms race between the two countries. Today, there is growing consensus that the United States is entering into a new kind of cold war with another communist superpower: China.

As the U.S.-China trade war heats up—potentially morphing into a larger technology war—and competition becomes the primary dynamic, what parallels can be made? Dr. Oriana Skylar Mastro of Georgetown University and the American Enterprise Institute explains why U.S. relations with China differ from those with the former Soviet Union, and why a new cold war might not be the worst outcome.

Oriana Skylar Mastro is an assistant professor of security studies at the Edmund A. Walsh School of Foreign Service at Georgetown University, where her research addresses critical questions regarding Chinese military and security policy, military operations, and rising power challenges to the international order. Dr. Mastro is also a Jeane Kirkpatrick Visiting Scholar at the American Enterprise Institute and concurrently serves in the United States Air Force Reserve as a senior China analyst at the Pentagon. She is the author of numerous publications, including The Costs of Conversation: Obstacles to Peace Talks in Wartime (Cornell University Press, 2019). Dr. Mastro is a fellow in the National Committee on U.S.-China Relations’ Public Intellectuals Program.

What were the characteristics of the U.S.-U.S.S.R. relationship during the Cold War?

Oriana Skylar Mastro: The relationship between the United States and the Soviet Union was primarily defined by an ideological clash, in which the Soviet Union wanted to build a world of communist countries and the United States wanted to promote one that was more democratic and capitalist in nature. So, one defining difference is that ideological component, and the second is the means through which both sides tried to achieve their goals. I would say foreign military interventions and proxy wars, in other words, the military aspect of the relationship, was the defining characteristic of that competition.

Another issue between those two countries is the fact that the two sides weren’t really engaged with one another, and they were both trying to build separate spheres of influence. So they weren’t actually directly competing on a day-to-day basis; they were trying to build up separate areas where they had out-competed the other.

What are the defining traits of the U.S.-China relationship today?

Another aspect is that the United States and China have much more engagement with one another, whether it’s people-to-people relations or in international institutions. This is a good thing because it allows for more understanding and more dialogue, but it also means, because we are trying to compete with each other in the same space, that there is actually more room for friction as well.

How can the United States and China co-exist as competitors without heading into a new cold war?

Mastro: So, I would argue that a new cold war is not the worst-case scenario that we can have. In the U.S.-China relationship, there is much higher a possibility of actually a hot war between the two countries than existed between the Soviet Union and the United States. And so, if the scenario that we find ourselves in is one in which there is more and more competition between the two sides and, perhaps, the two countries are moving farther apart, I would argue that that’s better than alternatives in which the two sides actually end up fighting a war. That being said, it would obviously be more ideal if engagement and areas of cooperation continued between the two sides as the competitive elements got more and more intense. But, in general, I think currently the United States and China define both of our interests in such a way in the region that it’s highly unlikely that tensions and increased competition over time can be avoided.

Why do you think there is a greater possibility of a “hot” war?

Mastro: So I think there are two reasons. The first is the Chinese military and the U.S. military don’t share the same symmetries of power as the United States and the Soviet Union did, so we don’t have the same conventional deterrence present, and we also don’t have the same nuclear deterrence present because it’s unclear whether we have a relationship of mutually assured destruction with the Chinese. In other words, I think quite reasonably, China has pursued a different nuclear doctrine in which they have a quite limited number of nuclear weapons, and they are prepared to use those nuclear weapons only to deter nuclear use. What that means is the Chinese haven’t leveraged those to try to deter conventional conflict. And so, that’s why I think that the United States considers more conventional possibilities, and also, we have all these outstanding territorial disputes between China and U.S. allies that could potentially drag the two sides into a conflict.

Are there any specific policies that could be adopted to prevent a new cold war dynamic?

Mastro: The problem I see is not the policies that the two sides have. Right now policies are derived from how the two countries are defining their national interests, and in Xi Jinping’s China, the national interest is defined in such a way that it precludes a very strong U.S. military presence. For example, with the South China Sea, China’s interpretation of international law is such that the United States’ military can’t be present there. For the United States, Washington defines its own national interests as being present in Asia militarily, in that if the United States can’t defend its allies and partners, it loses its leadership role, and given the global nature now of threats and competition, the United States believes it has to be able to operate freely around the world, even to protect the homeland. So given that China defines its national security in such a way that it wants the U.S. military farther away, and the United States, we define our national security such that we need to be closer to China, it is kind of hard to avoid this conflict of interest, and then you see the policies stemming from that. So you would have to see basically a re-thinking and a re-formulation in both capitals about what they need to be secure and what they need to protect their national interests globally. 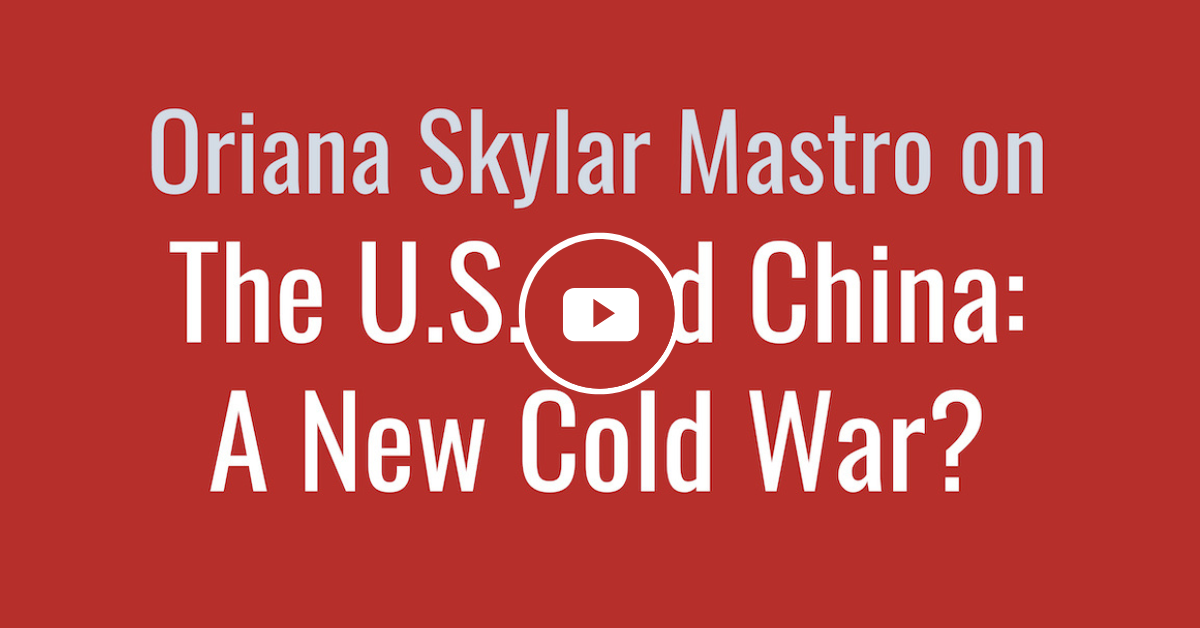 Oriana Skylar Mastro explains why U.S. relations with China differ from those with the former Soviet Union, and why a new cold war might not be the worst outcome.