President Tsai Ing-wen was re-elected in January, 2020, on a platform similar to that of her first term, yet new cross-Strait developments and changing challenges at home suggest the next four years may not be a continuation of the status quo. Seton Hall University law professor and Taiwan expert Margaret Lewis explores the possibilities for mainland-Taiwan relations as well as the local issues that will define both Tsai’s second term and the near future of Taiwan.

Margaret K. Lewis is a professor of law at Seton Hall University. Her research focuses on law in China and Taiwan with an emphasis on criminal justice. Professor Lewis has been a Fulbright senior scholar at National Taiwan University, a visiting professor at Academia Sinica, a term member of the Council on Foreign Relations, a Public Intellectuals Program Fellow with the National Committee on United States-China Relations, and a delegate to the US-Japan Foundation’s US-Japan Leadership Program.

With Tsai Ing-wen’s reelection in January 2020, can we expect any changes in cross-strait relations?

Margaret Lewis: It’s difficult to look into a crystal ball and know what’s going to happen with cross-strait relations, so I’ll speak with a big caveat of, “Who knows?” However, I think it’s important that, by the time the election occurred, it certainly would not come as a surprise to Beijing that Tsai Ing-wen was reelected. The polls all showed things were going in that direction even though there were some questions about whether the polls were accurate, because Han Kuo-yu, her KMT opponent, had asked some of the supporters to actually either respond incorrectly or not at all. Now, regarding what could happen across the strait, I think our most likely scenario at this point is continuation of what’s been occurring since Tsai came into office in 2016.

We keeping asking, “Will Beijing further tighten the screws?” What does that mean? Will Beijing try to make it so there’s even less international space for Taiwan in international organizations? Will there be efforts to further strip diplomatic allies that officially recognize Taiwan as the Republic of China? Will there be efforts to otherwise block Taiwan economically from being integrated further into the international economy? The reality is those screws are already pretty tight. They are down to fifteen formal diplomatic allies. There’s a very limited group of international organizations in which Taiwan can participate, like APEC. There’s not a lot of space to further constrain.

As far as other measures that might be more carrots rather than sticks, there could be more economic incentives for people from Taiwan to work and spend time in China. The question there though is, does absence make the heart grow fonder? When people go and spend time in China, will that increase affinities? Or if there is exposure to a very different political system, how will that create different reactions in Taiwan? Especially if Hong Kong continues to be a source of strain in the relationship, then I think we’ll see a continuing sense of skepticism and concern about close relations across the strait.

What major issues will Taiwan face in the next four years?

Lewis: Tsai Ing-wen faces a number of issues that are domestic issues and thus get less play on the international stage. Some of these are things like energy policy, how do you move away from nuclear energy without increasing air pollution, continuing issues involving the demographic shifting to an older population. The pension system has been revised, and the reforms have eased some of that burden, but it has not solved the problem. We will also see continuing questions about the domestic response to misinformation, disinformation, fake news, whatever you want to call it, especially one that is seen as connected to China. An anti-infiltration bill has already been put forth, and we’re likely to see a whole suite of legislation, for example, some sort of foreign agent registration act.

On the social side, we will also probably see continuing conversations around marriage equality. Taiwan has already legalized same-sex marriage, but a number of big issues were left open. For example, may a same-sex couple adopt a child from outside of the relationship, where neither of the people in that relationship is a biological parent of the child? What about use of assisted reproductive technologies? Not only by same-sex couple but also by single women. These are all big questions that are out there and need to be grappled with, perhaps in the next four years, and certainly at some point in the future. 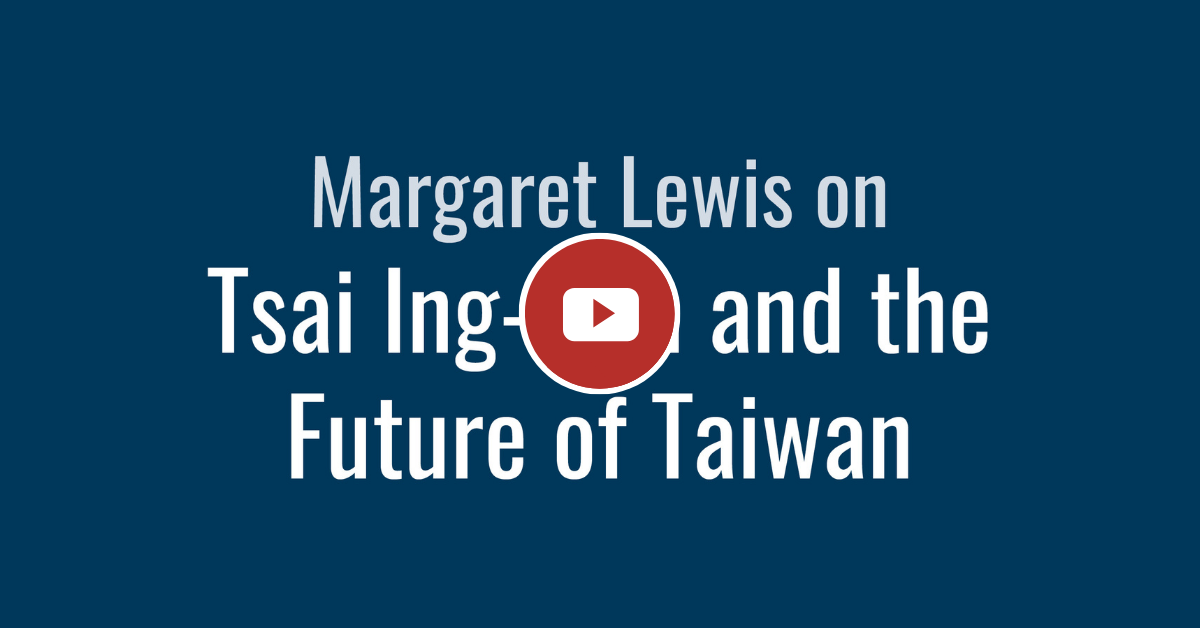 Margaret Lewis on Tsai Ing-wen and the Future of Taiwan | U.S.-China Insights

VIDEO: Margaret Lewis explores the possibilities for mainland-Taiwan relations as well as the local issues that will define both Tsai's second term and the near future of Taiwan.