China’s high-tech industries have grown rapidly in recent years, as companies like Tencent and Alibaba achieve global name recognition and the quality of the country’s digital infrastructure improves. To accelerate the development of its industrial capacity, Beijing has launched ‘Made in China 2025,’ a strategic blueprint that seeks to make China a global leader in high-tech manufacturing industries currently dominated by the United States and other developed economies. American opposition to the policy centers on arguments that it poses a national security threat, and would harm U.S. companies and distort global markets with its reliance on government subsidies, discriminatory treatment of foreign investment, forced technology transfers, intellectual property theft, and cyber espionage.

Professor Yu Zhou of Vassar College explains why China is pursuing this initiative, its effect on China’s technological capabilities, and the potential for cooperation—rather than competition—between the United States and China.

Yu Zhou is professor of geography at Vassar College. Professor Zhou received bachelor and master’s degrees from the Department of Regional and Environmental Sciences (formerly Geography) at Peking University and received a Ph.D. in geography from the University of Minnesota in 1995. Her current research is on globalization and high-tech industries in China. More recently, she has done research into China’s green building program and urban sustainability. In the United States, her work focuses on the areas of ethnic business, gender and ethnic communities, and transnational business networks. In 2008, she was selected as a fellow in the National Committee on U.S.-China Relations’ Public Intellectuals Program. Professor Zhou has been interviewed by The New York Times, The Washington Post, and Voice of America, among others.

Yu Zhou: So, this is the strategic plan published in June 2015 by the Chinese State Council and the Chinese Development and Reform Commission. It is designed to provide the strategic long-term guidelines for the Chinese manufacturing industry for the next 35 years. I want to say that it is rather routine for China to put out these long-term strategic plans. They have a five-year plan and then this plan for different industries or sectors.

Why is China pursuing this initiative?

Zhou: From China’s perspective, it is standing at a crossroads. So, there are three key factors behind this initiative.

The first has to do with where China is in terms of a global production system. China exports a lot of manufactured goods, but most of it is at the low end of the global supply chain. For example, for iPhone if you sell an iPhone for retail price $600, $700, China is the assembly place and only makes $6 of it. Many products are like that. So, Chinese companies are at the low end. That can transfer into low wages and low-profit rate. So that’s the first reason.

The second reason is that China has a growing middle-class of consumers. So, they demand better product in terms of quality, technology cost and sophistication. In these cases, we find many Chinese consumers are really, for example, a few years ago interested in Japanese-made rice cookers or Japanese toilet seats. This signals to the Chinese manufacturers that they need to make better quality, high-technology products for consumers.

The third reason is that Chinese wages for manufacturing workers has been going up very rapidly in the  last 10 years, to the point that it is close to, or maybe it is already, the most expensive in developing economies in Asia. That’s good for the workers, but it also cuts China’s competitiveness. So, in order to offer the wages that are competitive in the market, Chinese companies have to upgrade. So, either from the technology perspective, because the dependence on foreign technology has always been issue, or from the labor resources—the workers’ wage—or for the market, so that Chinese companies, as well as the Chinese government, have felt they have no choice but to look at technological upgrade.

This manufacture 2025 is an attempt to provide guidance for that development.

Which industries is ‘Made in China 2025’ focused on?

Zhou: Manufacture 2025 is a long-term plan, designed in three stages. By 2020, it wants China to be strong in some manufacturing areas. By 2035, it envisions China to become sort-of the middle of manufacturing nations. By 2050 it envisions China became a leader in a large number of manufacturing sectors. It also identifies 10 sectors that China should put strong emphasis on to develop. If you look at these 10 sectors, they are pretty much correspondent to China’s own needs, and also reference Germany’s manufacturer 4.0 plan.

Is China’s technological capacity at the same level as that of the United States?

Zhou: China is not at the same level as the U.S. in terms of key technological sectors. If you look at biotech. If you look at semiconductors or aerospace, China is nowhere near the same level as the United States. China is also lagging behind in almost all the basic scientific research areas compared to the United States. But China is putting in a lot of money and is catching up rapidly. However, it is hard to say when it will eventually catch up because scientific knowledge and scientific research take a very long time. Nowadays if we issue a Nobel Prize for science, it’s really rewarding work that done decades ago. So it takes a long time. China is putting a lot of money and putting a lot of manpower into research, but it’s going to be quite a while before it reaches the level of the United States.

What progress has China made so far in achieving its goals with this initiative?

Zhou: I think one could say is that China has so far built a very robust key foundation in terms of human resources, in terms of various financial resources that can be put into innovation, in terms of scientific establishment. So, there is a very good foundation that China is going from. But it is also facing considerable barriers in terms of its institutional shortfalls such as the freedom of scientists to pick their own projects, and the information transparencies, both within different institutions in China, as well as interexchange with other parts of the world. So, a lot has been accomplished, but there are significant institutional shortfalls.

Do you see any areas for cooperation, instead of competition, between the two countries?

Zhou: If you are talking about the United States and China, both are very strong in pursuing the technological lead. There are going to be a lot of competition. There’s really no way around it. But I do have to say a little more here that there is a sort of argument that a lot of China’s progress on technology is based on theft of intellectual property from the United States. We do have here and there cases that the Chinese scientists or engineers are being accused of intellectual theft.

I do not deny that happens, and it will still happen. But I think the important thing to remember is that, at the scale of China, technology and science progress require really long-term investment, and it requires a very large scale upgrade in terms of the infrastructure, in terms of talent, in terms of universities. The achievement that China has so far is predominantly a result of this investment, as well as the work of many scientists and engineers, both within China as well as international collaboration. So, it’s rather absurd to say, “Oh, it’s just a based on intellectual theft.”

That being said, what I’m saying is that there are many Chinese scientists and engineers who are very competent in their work, and they are very hard working. So, there are many areas the United States could benefit, and actually already benefits, from collaborating with China. And examples are many, but I want to just take three areas.

The second area is on the environmental collaboration. China is now the largest investor in renewable energy and alternative vehicles. So these are areas in which we see rapid technology development in the world. Right now, for various reasons, the United States is not investing that much in these areas, but we have a lot of scientists who have technology and scientific products that could benefit efforts against global warming. So, working with China on dealing with environmental problems, either global warming or pollution control, would benefit both China and the United States.

In the third area, the United States is world leader in terms of a biotech and pharmaceutical industries. But these new medicines take a long time and are extremely expensive to develop. 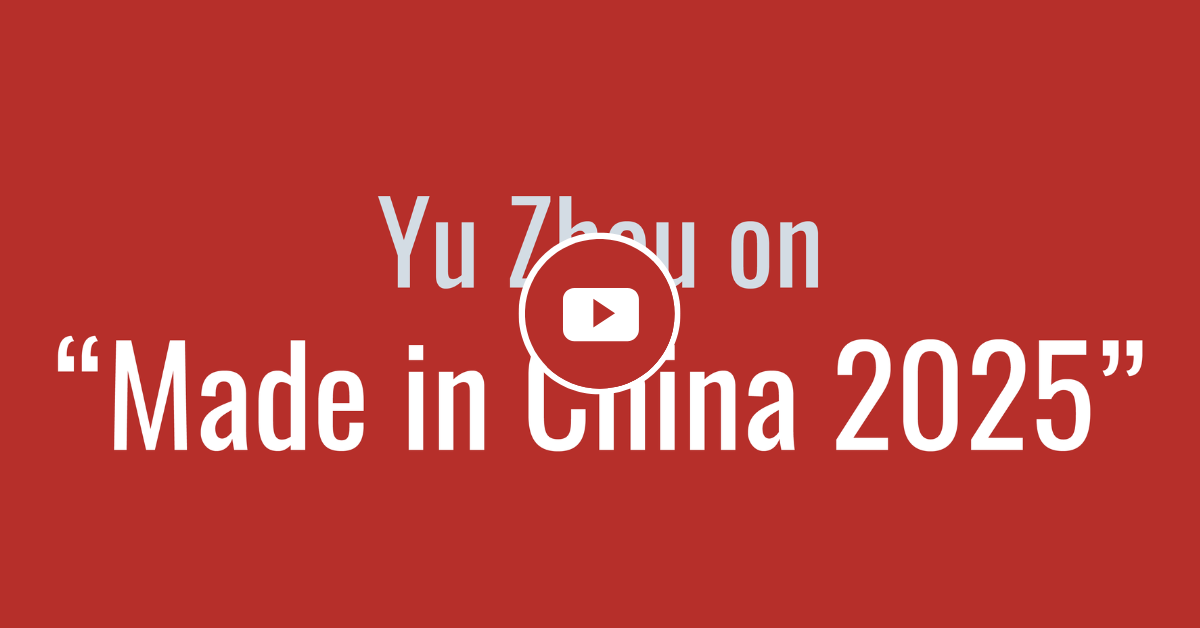 Professor Yu Zhou of Vassar College explains why China is pursuing its 'Made in China 2025' initiative, the effect on China's technological capabilities, and the potential for cooperation with the United States.