According to the most recent Open Doors Report, published by the Institute of International Education (IIE) in late 2017, China remains the number one sending country of international students to the United States. Approximately 350,000 Chinese currently attend American colleges and universities at the undergraduate and graduate levels. There are also growing numbers of Chinese students at American high schools.

On June 4, 2018, the National Committee held a program to discuss the impact of Chinese students on American academic institutions (in February 2018 FBI Director Christopher Wray and Director of National Intelligence Dan Coats suggested that Chinese students and scholars conduct espionage on American campuses), and what happens when (if?) the students return to China. The first topic was addressed by Ms. Peggy Blumenthal, senior counselor to the president of IIE; Dr. David Zweig, professor of political science at the Hong Kong University of Science and Technology, shared his research findings on returnees.

After 20 years of service at the Institute of International Education, Ms. Blumenthal became its chief operating officer in 2005, shifting to the role of senior counselor in 2011.  Before joining IIE in 1984, Ms. Blumenthal served as assistant director of Stanford University’s Overseas Studies and then as coordinator of Graduate Services/Fellowships for the University of Hawaii’s Center for Asian and Pacific Studies. She worked previously for the National Committee and the Asia Society’s China Council. Earlier she focused on domestic policy for NYC’s Mayor John Lindsay, the JDR3rd Fund, and the U.S. Equal Employment Opportunity Commission.

Selected publications include International Students and Global Mobility in Higher Education: National Trends and New Directions (Palgrave MacMillan, 2011), co-edited with Dr. Rajika Bhandari of IIE, and a recent article, “Welcoming the New Wave of Chinese Students on US Campuses: Changing Needs and Challenges”, in the summer 2017 edition of New Directions in Student Services, coauthored with Sonny Lim of Rice University.

Ms. Blumenthal holds a B.A. from Harvard University in modern Chinese history and an M.A. in American studies from the University of Hawaii at Manoa. She chairs Japan Center for International Exchange-USA and serves on the boards of the Hong Kong–America Center and the Global Engineering Education Exchange.

David Zweig is Chair Professor, Division of Social Science, and Director, Center on China’s Transnational Relations (www.cctr.ust.hk), at the Hong Kong University of Science and Technology.  He is an adjunct professor, School of Social Sciences and Humanities, National University of Defense Technology, Changsha, Hunan, and Vice-President of the Center on China’s Globalization (Beijing).

He lived in China for four years, first in the mid-1970’s and again in the 1980s and 1990s. He has made his home in Hong Kong since 1996. In 1984-85, he was a postdoctoral fellow at Harvard University. He received his Ph.D. in political science from the University of Michigan. 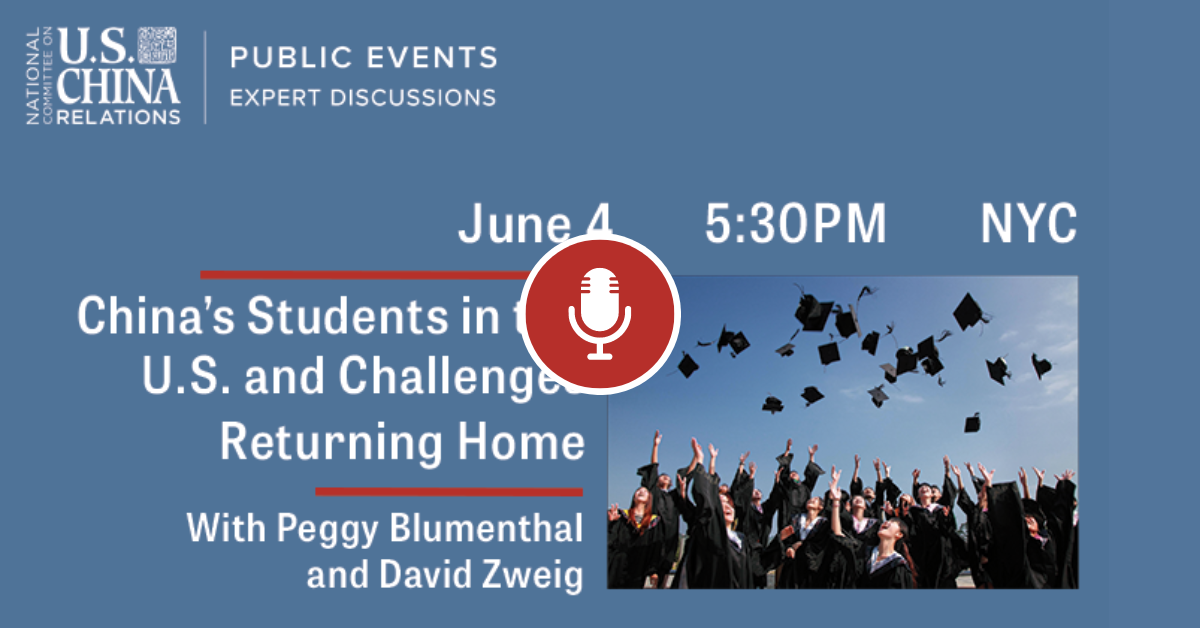 Peggy Blumenthal and David Zweig on China’s Students in the U.S.

PODCAST: Peggy Blumenthal and David Zweig discuss the impact of Chinese students on American academic institutions and what happens when the students return to China.

China’s Students in the U.S. and Challenges Returning Home

VIDEO: Peggy Blumenthal and David Zweig discuss the impact of Chinese students on American academic institutions and what happens when the students return to China.