In a February 8 report for the Peterson Institute for International Economics, Dr. Chad Bown argues that the U.S.-China Phase One Trade Deal should be examined by the Biden administration. The centerpiece of the trade deal – China’s pledge to buy $200 billion more of U.S. goods and services split over 2020 and 2021 – has thus far fallen far short of its target. Other elements of the deal, such as China’s commitment to reduce nontariff barriers and open up to foreign investment, merit consideration as the new administration develops its international economic policies. A fresh U.S. policy approach toward China is needed, and should be undertaken jointly with like-minded countries.

Dr. Chad Bown discusses the trade deal and prospects for American trade policies toward China in the new administration in an interview conducted on March 10, 2021.

Chad P. Bown, Reginald Jones Senior Fellow since March 2018, joined the Peterson Institute for International Economics as a senior fellow in 2016. His research examines international trade laws and institutions, trade negotiations, and trade disputes. Dr. Bown previously served as senior economist for international trade and investment in the White House Council of Economic Advisers and most recently as a lead economist at the World Bank. Earlier, he was a professor of economics at Brandeis University. He also spent a year in residence as a visiting scholar at the World Trade Organization (WTO) Secretariat in Geneva. Dr. Bown received his B.A. in economics and international relations from Bucknell University and his Ph.D. in economics from the University of Wisconsin. He is a member of the advisory board of the Bucknell Institute for Public Policy.

“Anatomy of a Flop: Why Trump’s U.S.-China Phase One Trade Deal Fell Short” by Chad P. Bown for the Peterson Institute for International Economics 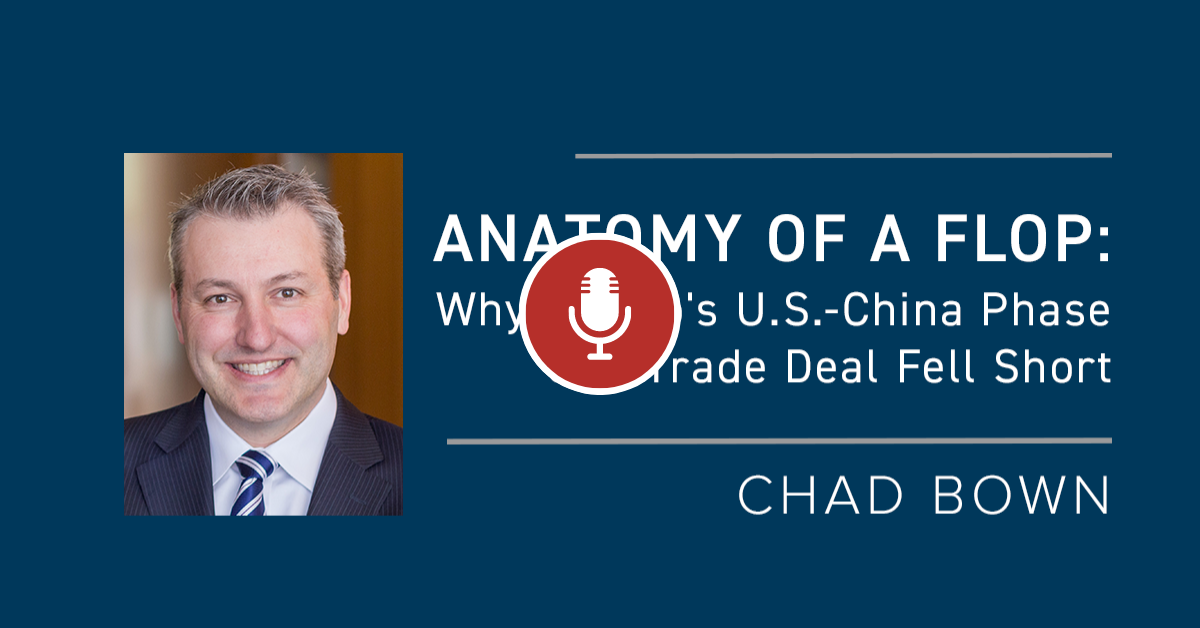 Anatomy of a Flop: Why Trump’s U.S.-China Phase One Trade Deal Fell Short

Anatomy of a Flop: Why Trump’s U.S.-China Phase One Trade Deal Fell Short