China’s booming film market has become an essential consideration for the production of Hollywood movies. In an effort to take advantage of this audience, American entertainment conglomerates are increasingly partnering with Chinese studios, and producing products for the Chinese market. How will America’s entertainment powerhouses and China’s burgeoning film industry collaborate to build their global brand identities?

Aynne Kokas is an associate professor of media studies at the University of Virginia and a senior faculty fellow at the Miller Center for Public Affairs. Her multiple-award-winning first book, Hollywood Made in China (University of California Press, 2017) argues that Chinese investment and regulations have transformed the US commercial media industry. Her next book project Data Trafficking: The United States, China, and the Global Battle for Data Security will examine the policy implications of the transfer of consumer data between the United States and China. Kokas’ research has also appeared in Information, Communication, and Society, Journal of Asian Studies, PLOS One, and others.

Kokas is a term member of the Council on Foreign Relations and a fellow of the National Committee’s Public Intellectual Program. Funding agencies including Fulbright, the Library of Congress, the Social Science Research Council, the Mellon Foundation, the National Endowment for the Humanities, the Abe Fellowship Program and others have supported her research. Kokas’ writing and commentary have appeared in forty-eight countries and eleven languages.

How has China interacted with the American film industry in recent years?

So how does this interaction benefit China and how does it benefit the United States?

Kokas: It’s really interesting. And we need to think about benefiting what part of China and what part of the United States. And I think this is where the dynamic starts to change. It benefits the Chinese film industry to have more foreign films, more U.S. films released in the Chinese market because it actually uses a lot of the studio capacity, particularly for unique format films, like 3D or IMAX. Now they’re a lot of them in China and there are a lot of them that are being released in the U.S., so this is a big advantage.

The other advantage is in terms of this Chinese focus on becoming the biggest and the most powerful in the world. So, Hollywood Studio Films also bolster the overall size of the Chinese market. Historically, they have. Now, this year in 2020, we won’t necessarily see that, but things like the “Avengers: End Game” increased the overall size of the Chinese box office because of the number of box office receipts.

Now, this is becoming less and less important as there are really big Chinese blockbusters that are appealing, at least to the Chinese market, maybe not to the global market at this point. So things like, “Wolf Warrior 2” or “Ninja,” “The Wandering Earth,” are really taking the Chinese box office by storm, even if they’re not making a big impact elsewhere.

Now, one thing that we do see, though, is that the U.S. is benefiting in terms of its overall market growth. So, U.S. studios are benefiting and the U.S. Stock Market is benefiting as these studios are able to grow. However, that doesn’t necessarily mean that the U.S. creative industries benefit as a whole because Hollywood studios are now thinking, “What does it mean when I make something for our access to the Chinese market? And not just about this particular film, but about anything that our company makes?”

What is the difference between China’s influence over U.S. filmmaking and America’s soft power over China?

Kokas: The key difference between Chinese influence over U.S. filmmaking and America’s soft power over China is the level of control that the Chinese government has in terms of market access. So, the Chinese government holds a very careful watch over the number of film distribution slots per year. Up until 2017, this was governed by the U.S.-China film agreement, which expired in February of 2017. And now, since February 2017, we’ve been engaged in this massive trade war, so we haven’t really had the chance to renegotiate those film quotas. So essentially, the Chinese government is not officially held to any requirements to admit U.S. films into the Chinese market.

Now, U.S. soft power has an attractive phenomenon. So, a lot of Chinese young people still enjoy watching Hollywood studio films. China, however, has not had that same success in the export of its film and media production.

How do you predict this influence, China’s influence on U.S. film industry, might change our industry over the next four or five years?

Kokas: Well, I think a lot of it will depend on what happens with the COVID box office. So, specifically, how quickly U.S. theaters are able to reopen and start to really admit large numbers of people in a very dense way. If that doesn’t happen for years, then we may see a Hollywood studio system that starts focusing almost entirely on the Chinese market, for any big-budget films. The other thing that I think we’re seeing is we may have a transformation in terms of where films are made. If the pandemic continues to be really bad in the U.S., we may see a lot of what’s called runaway production or production in other countries. So that could also shift the power dynamic between Hollywood and China.

How might the U.S. and China engage with each other more collaboratively or symbiotically in this arena?

Kokas: I think that are actually a lot of opportunities for potential collaboration. And I know that there’s been a lot of discussion about Chinese influence and Chinese soft power, and changes in content, and this whole situation with the Taiwan flag being removed from Tom Cruise’s jacket in the new “Top Gun” as a result of Chinese influence. These are real concerns. However, one of the things that was the foundation of the research for my book Hollywood Made in China was something that still exists today, and that’s the interest in shared creative collaboration between creative people in the United States and China.

And this doesn’t necessarily exist on the level of “Avengers: End Game” or these gigantic blockbuster films, but there are people who are screenwriters and independent producers who are still genuinely interested in learning from each other and telling shared stories. Or even not telling shared stories, just learning from one another and telling strange, idiosyncratic stories that they’re able to develop. And that’s really exciting, and I think it’s really important. And it’s very, very easy to overlook with the increases in rhetoric, both in Washington and in Beijing.

Kokas: Yeah. We’re definitely seeing an increase in Chinese studios operating within Hollywood and in funding films. This is actually the most significant within the context of tech firms that have moved into production. For example, Alibaba Pictures, because these are firms that are cash-rich. You don’t necessarily make like a ton of money from making movies. A lot of the reasons why they are a big blockbuster films is because they’re ancillary products. Like toys, and lunchboxes, and cartoons that are able to compliment the film production. So, cash-rich tech firms are actually uniquely poised to be able to participate in content production, even if they don’t get a financial return immediately. With the new WeChat ban and concerns about Tencent’s operations in the U.S., we see that this might also impact funding in Hollywood if the administration starts to move further in that direction.

Kokas: Yeah, absolutely. There are a lot of potential implications. One big one… And I wanna preface this by saying, I think that there is a logic to restricting TikTok’s ability to operate in the U.S. I don’t know that the way the administration went about it was the best approach. But, I mean, TikTok is a creative platform. And it’s owned by a Chinese firm. So I think that that was taken away. Now, there are some upsides from that happening, but I think we need to acknowledge the role that TikTok has played in the creative landscape in the U.S. in 2020. That’s important.

But the place where I really see huge issues in the media production landscape is with the banning of WeChat because we don’t understand fully yet what the implications will be for businesses that are trying to operate in China or with Chinese partners. So for example, my colleagues and friends who are working in LA with Chinese partners are on WeChat constantly because that’s the best way for them to interact with their colleagues. And if anyone’s going to be shooting in China, being able to function in China without WeChat, seems like an impossibility. So there are a lot of ways in which that really erodes the possibility for economic collaboration and for economic activity between the two countries. And this isn’t just with the film industry. This is in a huge range of other industries as well. 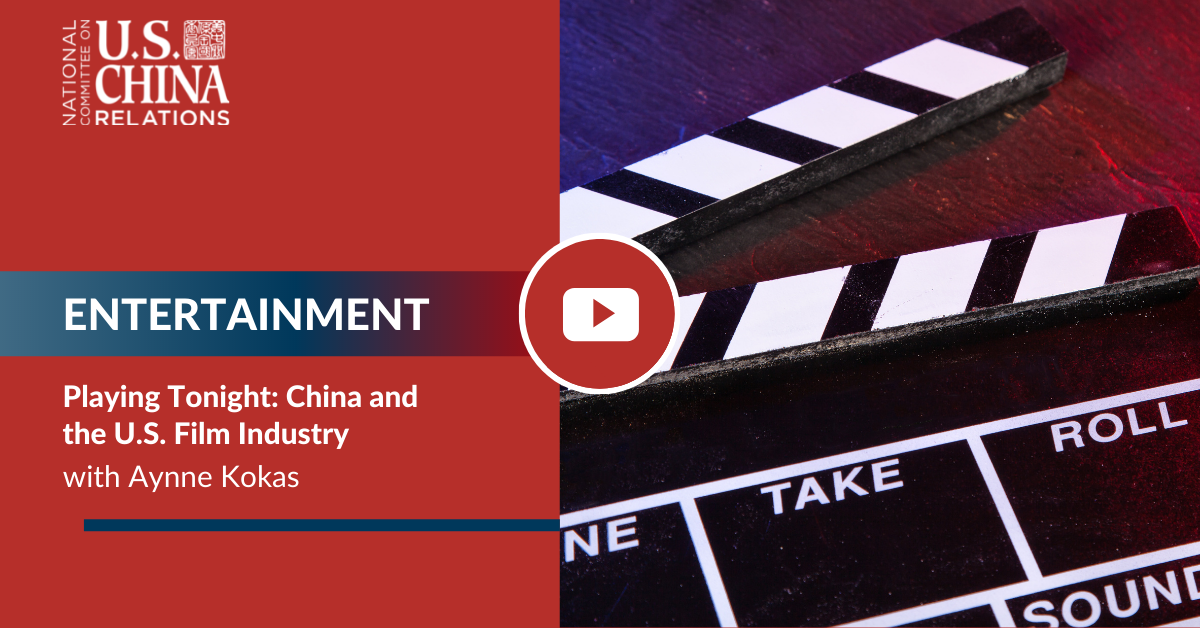