The U.S.-China relationship is clearly undergoing a transformation: after 40 years of normalized diplomatic relations, the status quo no longer seems acceptable to either side. One of the largest shifts has been the emergence of strategic issues as a greater factor in bilateral interactions. Dr. Evan Medeiros of Georgetown University explains this ‘securitization’ of the relationship, how it affects trade and diplomacy, and whether it represents a long-term trend.

Evan S. Medeiros is the Penner Family Chair in Asian Studies at Georgetown University’s School of Foreign Service. Until June 2015, Dr. Medeiros served as special assistant to President Barack Obama and senior director for Asian Affairs at the National Security Council (NSC), responsible for coordinating U.S. policy toward the Asia-Pacific across the areas of diplomacy, defense, economics, and intelligence affairs. He joined the NSC staff in summer 2009 as director for China, Taiwan, and Mongolian affairs and was actively involved in U.S.-China relations throughout his NSC tenure, including by developing the initial proposal for the Sunnyland’s Summit, planning the president’s 2014 summit with Chinese President Xi Jinping, and managing numerous other high-level U.S.-China interactions.

In recent years, Dr. Medeiros advised multinational companies on Asia in his role as managing director practice head for Asia at Eurasia Group, the global political risk consultancy. Prior to joining the White House, Dr. Medeiros also worked for seven years as a senior political scientist at the RAND Corporation. From 2007 to 2008, he also served as policy advisor to Secretary Hank Paulson working on the U.S.-China Strategic Economic Dialogue at the Treasury Department. Dr. Medeiros currently serves on the National Committee on U.S.-China Relations’ Board of Directors and is a fellow in its Public Intellectuals Program.

What is ‘securitization,’ and how does it relate to the current status of U.S.-China relations?

Evan Medeiros: Security competition has been at the heart of the U.S.-China relationship since the end of the Cold War. Differences over the status of Taiwan, differences over the validity of U.S. alliances, U.S. force structure, and American concerns about the PLA (the Chinese military) are not new to the U.S.-China relationship. But securitization is a different phenomenon. That is the phenomenon in which security issues begin to collide with economic issues in a way that is making the economic agenda and the security agenda overlap. There are a growing number of American concerns about the security implications of the U.S.-China economic relationship; that’s securitization.

What are some facets of the relationship in which you see securitization occurring?

Medeiros: Well, the main facet of the relationship where securitization is occurring is the economic relationship. In other words, the economic agenda is assuming a security competition dimension. For example, there are now many American analysts and government officials looking at the security threats emanating from U.S.-China trade, Chinese investment in the United States, and U.S.-China interactions on cyber issues. The economic agenda is not just about creating a level playing field; it’s not just about making sure American companies are competitive in the China market. It is also about protecting American national security.

How do you see securitization impacting the diplomatic sphere?

Does securitization mean that relations between the U.S. and China are now defined by hostility?

Is this new development in the relationship a temporary shift or a more permanent one?

Medeiros: It is hard to tell. It is clearly occurring right now, and that is resulting in a lot of U.S. assessments and changes in laws and regulations to more heavily scrutinize, on the one hand, Chinese investment coming into the United States, to make sure that the Chinese aren’t getting access to national security-related information, R&D, etc. But it’s also affecting the trade relationship, because the U.S. is now working on new export control laws to monitor and police the export of critical and foundational and emerging technologies from the United States to China. So, this is one of the short-term phenomena that could become a long-term phenomenon. 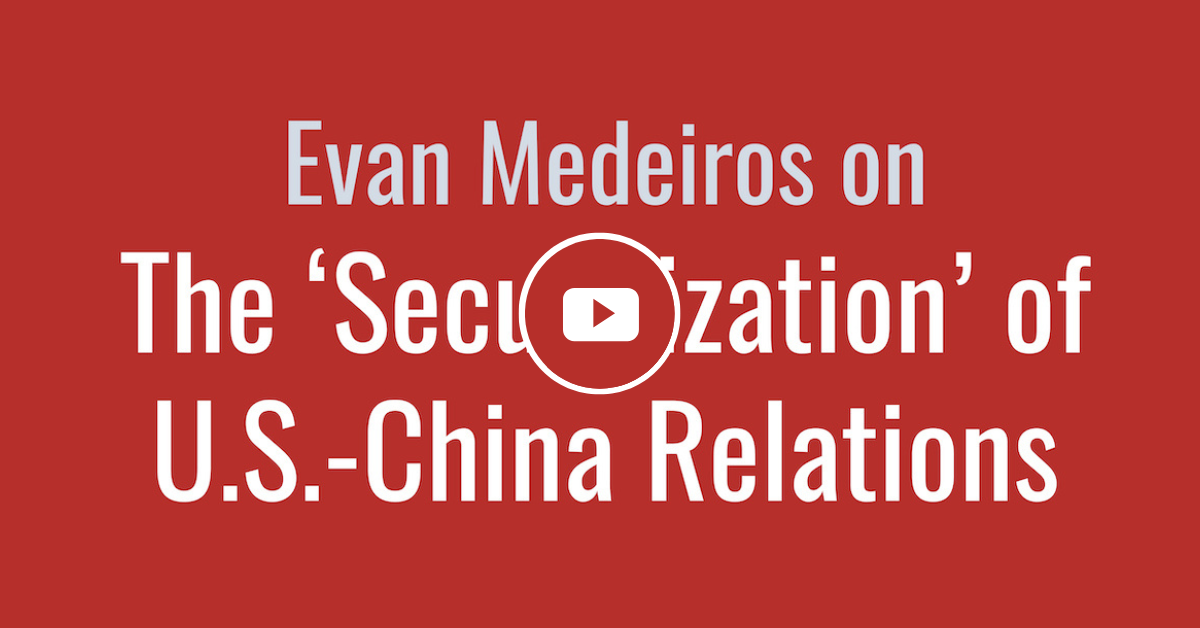 Evan Medeiros on the ‘Securitization’ of U.S.-China Relations | U.S.-China Insights

Dr. Evan Medeiros of Georgetown University explains the ‘securitization’ of the U.S.-China relationship, how it affects trade and diplomacy, and whether it represents a long-term trend.